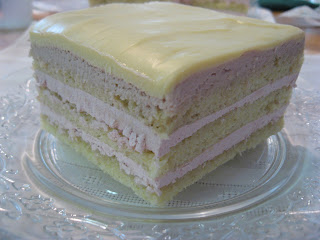 I was reading a couple of posts in the last day or two that really hit home for me.  One was Clara's post for this week's Tuesdays with Dorie recipe.  She mentions that this week she realized just how much she's learned over the past few months.  The other was a recent post of Jayne's where she talks about the great payoff we get from making things ourselves, from scratch.
I couldn't agree more with both of them.   What a difference a few months makes.  When I first started this blog and then later joined both Tuesdays with Dorie and the Daring Bakers, I wasn't very sure of myself.  I was pretty good at baking, but not all that adventurous.  The name of my blog comes from the paper notebook that I use to record my baking (and sometimes cooking) notes.  I've had it for just over three years.  I've filled as many pages in the last six months as I did in the previous two and a half years.  Wow.
I'm used to getting compliments when I bring baked goods to work or other events.  But now it's at a whole new level.  People are just amazed that I would make some of these things myself, and from scratch.  I'm kind of amazed myself.  =)  And at the same time, I can't believe the number of talented bakers there are out there, telling the world about their creations.  The more I read other blogs, the more I'm inspired to put my own twist on things.  And take cool pictures while I'm at it.
All of this musing was set off by my needing to write about this month's Daring Bakers creation, Opera Cake.  With a twist.  Traditional opera cake is made with flavors of dark chocolate and coffee.  Our hosts for this month decided to challenge everyone with something a bit different--white chocolate and light colors and flavors.  This recipe is a great example of how I've grown.  White chocolate isn't my favorite and I don't particularly like almonds, so I would normally pass right on by this one.  But I gave it a shot.  And with all of the things I've made recently, the batter for the joconde and the mousse and buttercream didn't faze me at all. I was very pleased with the final result. 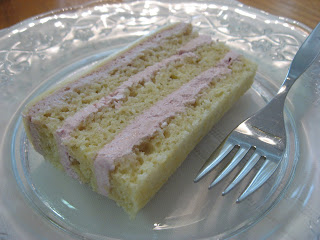 We were allowed to make our own choices as far as flavorings were concerned, as long as the result was light in color and flavor.  I knew immediately that I would go with my favorite, raspberry, for the mousse and buttercream.  I didn't add any flavoring to the cake layers other than the syrup used to moisten the cake.  I chose to use vanilla for that.
The only real challenge I had with the cake was the fact that I only had one sheet pan that was the right size.  I had to bake the layers one at a time.  Fortunately, since the baking time was so short, the remaining batter didn't deflate too much while the first layer was baking.  The syrup was quick to put together.  I didn't have a chance to look for vanilla beans, so I used vanilla extract for it.
I have to admit, I was quite confused by the recipe for the buttercream.  There were several corrections posted to the original recipe, and I wasn't sure which version to go with.  In the end, I exercised my option to use another buttercream, and used the one from March's Perfect Party Cake.  To flavor it with raspberry, I first tried substituting 1/4 cup of raspberry puree for the lemon juice.  That gave it a lovely pink color but not enough flavor.  So I added about three tablespoons of some amazing raspberry fruit butter (think jam but more intense).  The buttercream ended up being my favorite individual component.
I used the raspberry fruit butter for the mousse as well.  I started by melting some El Rey white chocolate disks with the cream.  My ganache tried to break, so I ended up adding a bit more cream and managed to whisk it together.  Then I whisked in the fruit butter (3-4 tablespoons) and folded in the whipped cream.  While I loved the flavor of the buttercream, the mousse was my favorite in texture. 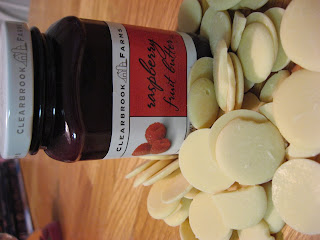 Assembly went as directed, with no problems.  I put the cake in the fridge to chill before adding the glaze.  I did make a small modification there.  I just don't like white chocolate enough to put fourteen ounces of it on top of a cake.  So I only made half the glaze recipe (with more of the El Rey Icoa).  It was enough for a nice layer without being too thick.
I ended up sharing the cake with two different groups.  Both were quite impressed with the finished structure.  And the combination of flavors was really nice.  But that won't stop me from using dark chocolate next time.  Ooh, dark chocolate with the raspberry buttercream--that's something I may have to try.  Yum.
Thanks to our fearless leaders Ivonne and Lis as well as two newer Daring Bakers, Fran and Shea, for hosting this month's challenge.  Check out their blogs for the complete Opera Cake recipe.  And a special mention for Barb of Winos and Foodies. This month's selection is dedicated to her and her support of LiveSTRONG Day, which was May 13th. 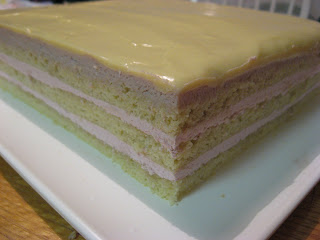