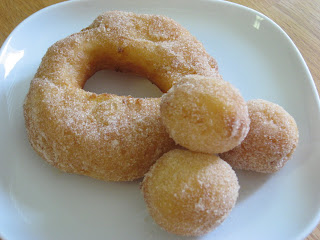 I don't think I've mentioned before that I have three younger sisters.  When we were kids, my dad would take us to church on Sunday morning (my mom didn't go).  Afterwards, we would often stop for a dozen doughnuts.  We each got to pick two, plus two each for Mom and Dad. We would argue over which one of us got to go in with Dad while the others waited in the car. It was quite a challenge to remember a dozen different doughnuts, since of course none of us liked the same ones.  Dad would never have been able to keep track of them all on his own.  =)
These days, I don't eat doughnuts very often.  I just don't have the same tolerance for sugary sweet treats.  (Chocolate, yes; sugar, no.)  I love baking something interesting for breakfast on the weekends, but I've never tried my hand at doughnuts.  I thought about it, back in February when I saw the Time to Make the Doughnuts event hosted by Culinary Concoctions by Peabody and Tartelette.  But I was too busy making bagels.  =)  For some reason, I've been thinking about it again lately.  So today I asked Brianna if she'd like cinnamon rolls or doughnuts for breakfast, and she immediately said doughnuts.
The only bad thing was that it was after 8am when I started.  I did have a recipe in mind, from Sherry Yard's Desserts by the Yard.  I knew that it would take quite a while, since the dough had to rise and then the cut doughnuts had to rise again.  But I thought it wouldn't be too bad. Unfortunately, I was wrong.  The dough turned out to be a huge pain to work with--very sticky. Freezing the dough before cutting (as directed) didn't help enough.  I finally just ended up using a bunch more flour on the countertop to keep it from sticking while I cut out the shapes.  Then I had problems with the frying.  We more or less ended up eating doughnuts for lunch.  =)  At least they tasted pretty good. 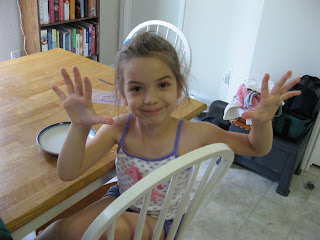 I know that many things are tough the first time you make them.  I definitely learned a few things from the experience.  The next time I try these, I'll start the dough the night before and let it rise in the fridge overnight.  I think the cold dough will be easier to work with (similar to brioche).  I still have half the dough in my freezer (already cut into doughnut shapes), so I think I'll try baking the rest instead of frying.  My dutch oven is huge and would have used way too much oil, so I tried to improvise with a smaller pot.  I had a really hard time regulating the temperature and the doughnuts ended up rather oily.  If I do try frying again, I think I'll try the Cooks' Illustrated suggestion of shortening instead of oil.  And I'll only fry what we'll eat right away, since even 12 hours later they aren't all that good anymore.  Oh, well--practice makes perfect, right? 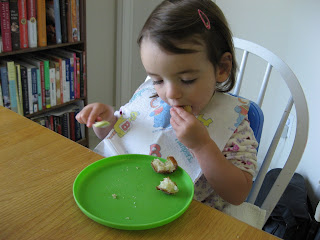 Buttermilk Yeast Doughnuts
(adapted from Desserts by the Yard by Sherry Yard)
1 1/2 teaspoons instant yeast
1/2 cup (4 ounces) whole milk, heated to lukewarm
1 tablespoon granulated sugar
1/2 cup (2 1/4 ounces) unbleached all-purpose flour
1/2 cup (4 ounces) whole milk, heated to lukewarm
1 cup (8 3/4 ounces) buttermilk, heated to lukewarm
1/4 cup + 1 teaspoon granulated sugar
1/2 teaspoon freshly grated nutmeg
3 1/2 cups (15 3/4 ounces) unbleached all-purpose flour
1 1/2 teaspoons table salt
4 tablespoons (1/2 stick) unsalted butter, cut into tablespoon-sized pieces and softened
oil for frying
1 cup sugar mixed with 1 tablespoon cinnamon
In the bowl of a stand mixer, whisk together the yeast and 1/2 cup of the milk until the yeast has dissolved.  Let stand for 5 minutes, then stir in the tablespoon of sugar and 1/2 cup flour, forming a thin batter.  Let rest at room temperature until bubbles form, 20 to 30 minutes.
Stir the other 1/2 cup milk, buttermilk, nutmeg and the remaining 1/4 cup plus 1 teaspoon sugar into the sponge.  Place the remaining 3 1/2 cups of flour and the salt on top of the sponge.  Put the bowl on the mixer fitted with the paddle attachment.  Mix on low speed for about 2 minutes, or until the dough comes together.  Scrape down the bowl and the paddle and change to the dough hook.  Increase the speed to medium and knead the dough for 5 minutes.  The mixture will be tacky.
Turn the speed down to medium-low and add the softened butter one tablespoon at a time.  Stop the mixer and scrape down the sides.  Mix for another five minutes on medium speed or until the dough is smooth.  Scrape the dough into a lightly oiled rising container.  Cover the container and set it aside for the dough to rise at room temperature until doubled in volume, 1 1/2 to 2 hours.
Line 2 12x17-inch sheet pans with parchment paper and lightly flour the parchment. When the dough has doubled in volume, turn it out onto a lightly floured work surface, and using a rolling pin, roll it out to a 10-inch square with a thickness of 1/2 inch.  Wrap the dough in plastic wrap and place in the freezer for 20 minutes.  Using a 2 1/2 inch round cutter, cut out circles of dough and use a 1 inch cutter to cut holes in the dough circles.  Dip the cutters in flour each time to make it easier.  Place the doughnuts and holes on the parchment-lined sheet pans.  Cover with plastic wrap and let rise for 30 minutes. 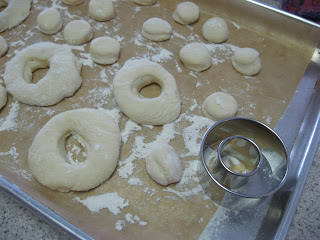 In a wide deep saucepan fitted with a deep-fry thermometer, heat 2-3 inches of oil over medium heat to 360 degrees F.   Carefully slide 3 doughnuts into the oil.  After 30 seconds, use a slotted spoon to carefully flip them over.  Brown the other side for 1 minute, then flip the doughnuts once more and cook for another 30 seconds.  Remove the doughnuts from the oil and drain them on a rack for 30 seconds.  Coat the tops of the doughnuts with the cinnamon sugar while they are still hot and wet with oil.  Repeat with the remaining doughnuts and holes. Serve immediately.  Makes about 16 doughnuts plus holes. 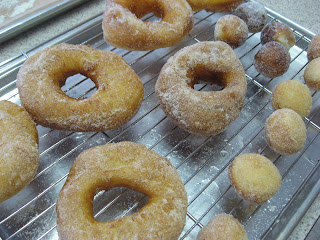