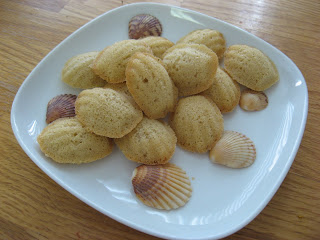 This week's Tuesdays with Dorie recipe was a lot of fun.  Tara of Smells Like Home chose Traditional Madeleines.  Since madeleines require a special pan, Laurie also gave everyone the option to make a previous selection instead.  Since I can't seem to pass up an opportunity to buy new stuff for my kitchen, I decided to go with the madeleines.
I did some checking around, since I've seen pans at a number of places, and some of them were rather expensive.  Williams-Sonoma had one on their website, and on Thursday I had a chance to stop by the store in Austin to see what they had in stock.  They had the non-stick pans for standard size madeleines and minis, but they also had regular (not non-stick) pans that were only $14, rather than $22.  I decided to be brave and go with the regular pan.  I couldn't decide between the two sizes, so I bought both.  =)
This is one of the few times when I've actually gotten an early start on the recipe of the week. The first batch that I made was according to the recipe, flavored with lemon zest.  It was a learning experience, which is a nice way of saying I had a number of problems.  Mixing up the batter was easy; getting the madeleines to turn out the way they're supposed to was the hard part.  For one thing, I overfilled the molds.  I think that was what caused the resulting cookies (are they cookies? cakes? something else?) to be flat, instead of having the characteristic bump on the back.  I also found that putting the pan on a sheet pan (per Dorie's directions) kept the madeleines from browning very well, and they really wanted to stick to the pan (despite my generous use of Pam for Baking).  Overall, while the results were fairly tasty, I wasn't very happy with how they turned out.
So naturally, I decided to make them again.  =)  The second time, I played around with the flavoring a bit.  I left out the lemon zest and reduced the vanilla to half a teaspoon.  Then I added some spices--1/4 teaspoon cinnamon plus a bit of ginger and freshly grated nutmeg.  I whisked them into the melted butter while it was still warm.  I really like the way the madeleines tasted.  As far as baking, I did a test run of just half a dozen regular sized cookies.  I made sure not to overfill the molds this time, and put the pan directly on the oven rack to bake. The results were much better.  I got nice browning, good definition on the shells, and at least rounded backs this time. 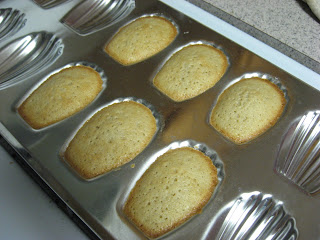 Jamie and I enjoyed those Saturday night.  On Sunday morning, I used the rest of the batter to make a batch of minis.  Brianna and Gillian helped me eat them for breakfast while we were waiting on the cinnamon rolls.  Brianna was quite intrigued by the name--her middle name is Madeline.  I loved the contrast of the crispy edges and soft middles.  Gillian just ate hers as quickly as possible and immediately asked for "Mo?"
You can check out the recipe at the Borders recipe file.  Also be sure to check out the blogroll for more madeleines and to see what other past recipes people chose to bake this week! 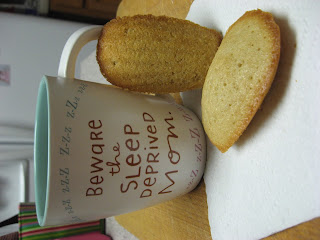