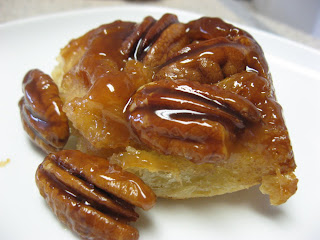 Despite what I said last weekend about avoiding time-consuming recipes for breakfast, I did it again.  But it was for a good cause--this week's Tuesdays with Dorie recipe.  What was on the menu this week?  Pecan Honey Sticky Buns, courtesy of Madam Chow's Kitchen.
As is too often the case, I was getting down to the wire in making the sticky buns.  I had to work Saturday, and we had a wedding to go to on Sunday, so I knew I wouldn't be able to make them before Monday morning (yay! for holidays).  I did remember to start the dough fairly early Sunday evening, so I'd have enough time for it to rise and be "slapped down" in the fridge before I went to bed.  And as with when I made this dough for the Brioche Raisin Snails, thank goodness for my Kitchen Aid mixer!  I know a number of people made the dough by hand, but it is so much easier to just let the mixer do its thing on my counter.  That way I could work on dinner at the same time, pausing occasionally to toss in another piece or two of butter.
Monday morning I pulled the dough out of the fridge to divide it in half.  I really thought that I'd put the weight of the dough into my notes (in my paper notebook) last time, but I couldn't find it.  The whole batch weighed about 41 ounces.  I set aside half of that for the sticky buns. Last time I used the extra dough to make brioche rolls.  I'm not sure yet what I want to do with the rest of this batch, so I put the second half into a ziploc bag and tossed it into the freezer.
I knew I didn't want to make 15 or 16 buns, so I decided to go with half and use an 8 inch square pan.  I made half the glaze, and only put pecan halves on about two-thirds of the pan, since I know Brianna doesn't like nuts.  I rolled out the dough that I'd set aside, spread the butter over it, and sprinkled it with the cinnamon sugar.  I had to work quickly, since the dough gets a bit harder to work with as it warms up.  I rolled the dough into a log as directed and used my handy dental floss (regular unwaxed) to cut 8 buns from half of it.  I put the buns cut-side up on top of the glaze in the pan.  I wrapped the rest of the dough log and put it in my freezer for another time.
I put the pan in the oven, and then realized that I forgot to put it on a sheet pan as Dorie directed.  So I took it back out and put it on the pan before putting it back in the oven.  I wish I'd just left it alone.  At about 25 minutes, the buns looked quite brown on top, and I thought they were done.  After waiting a couple minutes for most of the bubbling to die down, I flipped the buns onto a plate.  That's when I discovered that they weren't as done as I thought.  Argh! The ones in the center, in particular, weren't all the way baked.  I stood there for a minute, trying to figure out what to do.  I decided that they had to go back in.  So you can just imagine me here in my kitchen, trying to figure out how to get the buns back into the pan, glaze-side down, without getting molten sugar all over myself.  I finally managed it with only a small burn on my finger, and stood there, consoling myself by eating the goo left on the plate, while the buns baked for another ten minutes.  They ended up a bit darker than I would have liked, but at least they were cooked.  I swear, I'm going to quit putting pans on another sheet pan to bake, no matter what Dorie says.  Most of the time it just doesn't work for me. 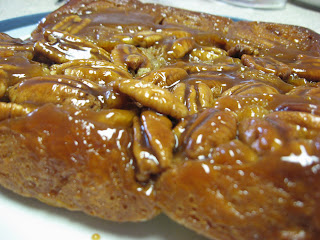 Anyway, the verdict?  I don't know if I'll make this exact recipe again.  I love the brioche dough. I enjoyed the sticky glaze and the pecans.  But the two together were just too rich for my taste. I'd like to make the sticky buns with a different dough (maybe with the one that I used for the cinnamon rolls) to see if I like that better.  And the brioche is fabulous all by itself.  As for the already prepped dough log in my freezer, it'll most likely end up as cinnamon rolls.
Don't forget to check out the blog roll over at the Tuesdays with Dorie site to see how everyone else fared! 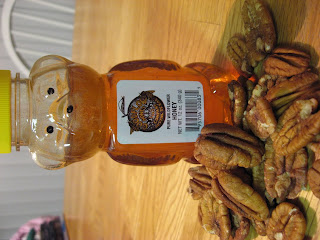