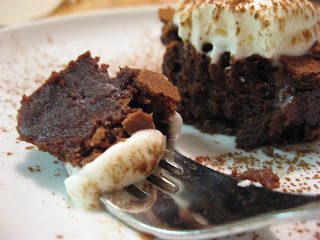 So this was my week to pick!  I had no idea it would be so hard to make up my mind.  I had some different things that I've been considering over the past few months since I got the book.  But when it came down to actually deciding, it was tough.  I had a couple criteria in mind.  I wanted something not too complicated.  And a recipe that didn't make a huge quantity of something.  In other words, no big cakes or pies.  I seriously considered something from the breakfast/quick bread section of the book.  Then I started thinking about the fact that we haven't had very many recipes that were chocolate-intensive.  I'm a diehard chocoholic--as you can see from my pantry.  So I turned to the brownies.
Dorie has quite a few brownie recipes in there--more than I realized until I started looking closely at them.  As I went through them, I kept turning back to the French Chocolate Brownies.  I love raisins.  I put them in my chocolate chip cookies.  I love them in cinnamon rolls.  And in anything with apples.  But in brownies?  That seemed like it might be a bit weird. So I decided to get my husband's input.  I ran through the different brownie options for him and when I was done, he immediately said that the French Chocolate Brownies sounded the most intriguing to him because of the rum raisins.  So that's what I went with! 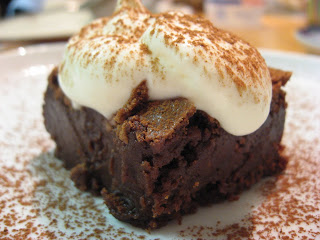 When I sent my selection in to Laurie, she cautioned me not to be upset if people didn't seem to like the raisins in there.  But I was already expecting that, after all the posts I read about the Brioche Raisin Snails and the Russian Grandmothers' Apple Pie-Cake.  I was hoping that most people would try substituting some other dried fruit.  I imagine that dried cherries would be good, if I liked cherries.  =)
The brownies were pretty easy to make.  I did the raisins the evening before, since I like to give them lots of time to soak up the rum.  I had some trouble flaming them this time.  I checked the recipe for the snails (where I didn't have any problems), and it has twice as much rum.  I'll have to try that next time.  I want more raisins anyway.  I went with my usual bittersweet chocolate, El Rey Gran Saman 70%.  My baking time was at the shorter end of what the recipe indicated (50 min).
A number of people mentioned that the brownies have an odd thick crust on top, and I did get that.  But the taste was still terrific.  The raisins were a fantastic addition, except that there weren't enough of them.  I'm not sure if this particular brownie recipe will make it into my regular rotation, but I definitely want to try adding the rum raisins to some of my other favorite versions.  The brownies are good on their own, but I couldn't resist trying one of Dorie's recommended garnishes, to dress up the photos.  Plus I got to add a bit more rum to the whipped cream.  =)
Don't forget to head over to the Tuesdays with Dorie page to check out the blogroll and see what everyone else did to put their own stamps on this week's recipe. 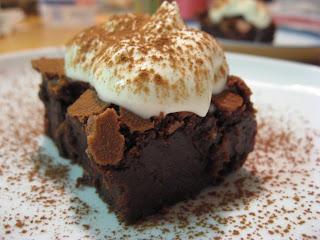 French Chocolate Brownies
(adapted from Baking From My Home to Yours by Dorie Greenspan, pages 92-93)

Getting ready: Center a rack in the oven and preheat the oven to 300 degrees F. Line an 8-inch square baking pan with foil, butter the foil and place the pan on a baking sheet.  (I lined the pan with non-stick foil and skipped the butter.)

Whisk the flour, salt and cinnamon together.

Put the raisins in a small saucepan with the water, bring to a boil over medium heat and cook until the water almost evaporates. Add the rum and let it warm for about 30 seconds, then turn off the heat, stand back and ignite the rum with a long match. Allow the flames to die down, and set the raisins aside.  (I had trouble with flaming the raisins--not enough rum?  Also, I like to do this quite a while before I make the rest of the recipe to give the raisins lots of time to soak up the rum.)

Put the chocolate in a heatproof bowl and set the bowl over a saucepan of simmering water. Stir occasionally until the chocolate melts. Remove the bowl from the saucepan and add the butter, stirring until it melts. It’s important that the chocolate and butter not get very hot. However, if the butter is not melting, you can put the bowl back over the still-hot water for a minute. If you’ve got a couple of little bits of unmelted butter, leave them—it’s better to have a few bits than to overheat the whole.  (I used the microwave.)

Bake for 50 to 60 minutes, or until the top is dry and crackled and a thin knife inserted into the center comes out clean. Transfer the pan to a rack and cool to warm or room temperature.

Carefully lift the brownies out of the pan, using the foil edges as handles, and transfer to a cutting board. Cut into 16 squares, each roughly 2 inches on a side, taking care not to cut through the foil.

Serving: The brownies are good just warm or at room temperature; they’re even fine cold. I like these with a little something on top or alongside—good accompaniments are whipped crème fraiche or whipped cream, ice cream or chocolate sauce or, dare I suggest, all three!

Storing: Wrapped well, these can be kept a room temperature for up to 3 days, or frozen for up to 2 months. 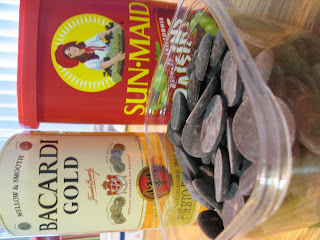