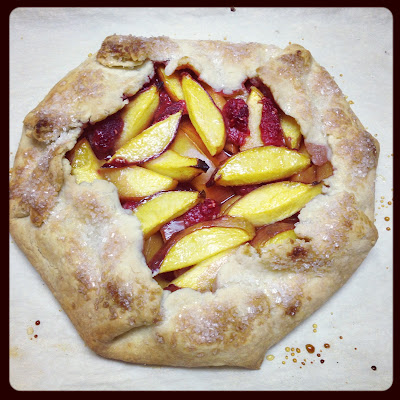 (Freeform Summer Fruit Tart)
Posted by Di at 5:00 AM 3 comments: 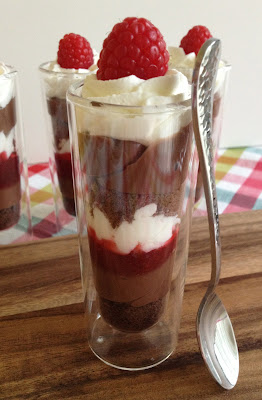 I've decided that I like this whole wrap-around vacation thing that I did this time.  I was off starting on the 4th, and went back to work yesterday.  It was long enough for a good rest, and I got to have two short work weeks!  I can definitely see myself doing this again, especially since we don't usually go anywhere when I'm off--I'm just making sure that I use my vacation time so I don't lose it.

It's amazing how getting somewhat caught up on sleep can improve your whole outlook on life.  As I mentioned in my last post, I was totally stressed out by everything that was going on in my life.  I was having a great Twitter conversation with my friends Rebecca & Abby on Tuesday (before I went back to work) about the fact that I was mostly in need of an attitude adjustment.  Work is what it is, and I need to pay the bills.  Heck, I actually mostly like what I do, and I'm darn good at it.  But I need to learn to leave work at work.  I don't mean that I actually bring stuff home, since my job isn't the sort where I can really do that.  I mean that I need to do a better job of shifting gears mentally so that I don't bring the stress home with me.  Easier said than done, I'm sure, but I have to start somewhere.

One of the things that I've been doing this summer is participating in an online course that focuses on bringing more play, rest and kindness into our lives on a daily basis.  I realized that my worrying about work so much was interfering with my rest for sure, and meant that I was seldom in the mood for any play.  And I need to be kinder to myself.  One of the messages from earlier this week was, "You are enough. (it's true)"  Too often, I feel like I'm not at all close to being enough.  But if I keep telling myself that I am, maybe I'll start to believe it. 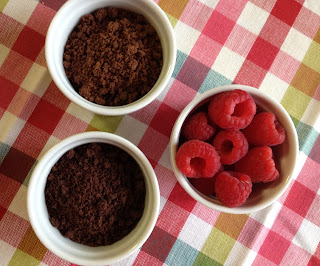 So what does the dessert pictured here have to do with all this?  Well, it was part of my attempt to "play" more.  I bake for a couple of reasons.  For one, I really enjoy making things for others--I like seeing them happy, and enjoy the compliments I receive, too. =)  But I also bake because I like to "play around," as Dorie Greenspan says.  I like to see what will happen if I change things up a bit with a recipe, or take components from different places and put them together in new ways.

I have to admit, the mini parfait idea was inspired by a show on (I think) Cooking Channel.  They profiled a bakery called Vanilla Bakeshop that does these in a variety of flavors.  My first thought was that it was a cool idea.  My second was, "I can do that!"  I treated myself to a visit to Crate & Barrel while I was on vacation, and among other things, I came home with several 3-oz shot glasses.  So then I just had to figure out what to put in them.  I could have used crumbled cookies or bits of cake, but then I remembered these Cocoa Crumbs that Dorie posted about recently.  Naturally, I had to experiment--I did two half-batches, one with Valrhona dutch-processed cocoa, and one with Scharffen Berger natural cocoa.  For the pudding-y part, I turned to Dorie again, this time pulling out my copy of Baking, which has a recipe for creamy chocolate pastry cream in the back of the book.  I whipped up some cream, and started layering.  (A pastry bag & piping tip make it much easier to get the pastry cream and whipped cream neatly into the tall, skinny containers.)  At the last minute, I also drizzled in some raspberry sauce, since I love the combination of raspberry with chocolate. 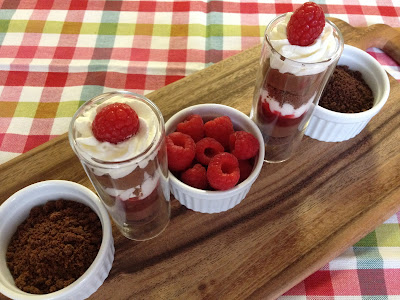 The verdict?  Mmm, we really enjoyed these delightful desserts.  The small size is just enough to get a good taste of everything without feeling like you're overindulging.  The crumbs made with the Dutch-processed cocoa are very reminiscent of Oreos, which isn't a bad thing, but I really enjoyed the ones with natural cocoa, too.  They had a more interesting character.  I hope you'll experiment for yourself to see which you like better.  I'll be making more of these soon--I can't wait to try different flavor combinations. 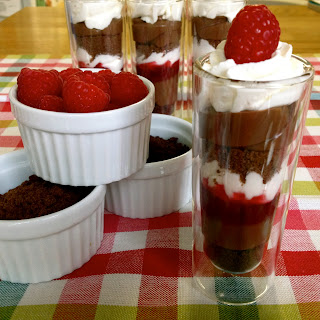 When life hands you lemons 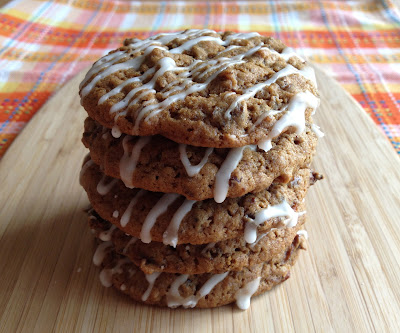 It's 11:30pm, and I'm still up.  J headed up to bed, but I didn't feel wound down enough to sleep yet.  Then I realized that I hadn't had my nightly mug of tea yet.  I'm drinking Christmas Morning, which may not seem appropriate for a late night in July, but it's one of my favorites.  Normally I'd be stressing about getting enough sleep, since I tend to get up early for work, but I'm on vacation for a couple more days.  It's amazing how much better I feel, after getting a decent amount of sleep and some naps in over the past few days.  I needed this break.  A lot.

There has been so much going on.  When I saw my mother-in-law a few weeks ago, she commented that she could tell I'd been busy with work because I hadn't been posting here much.  (The fact that we were having the conversation in person is an indication of how crazy things have been, since that wasn't really planned.)  She's right.  When I'm just stressed about work, or stressed about my personal life, I can usually manage.  But both have been kind of out of control, which tends to make me shut down.  I do what I have to in order to survive on a daily basis, but that's about it.  Fortunately, I think I'm finally starting to see the light at the end of the tunnel.  I'm starting to feel creative again, which I haven't in quite a while.  One nice thing about having some vacation time is that I've had a change to play around in the kitchen, and I actually feel like writing about some of it.  (So hopefully you'll see some more posts after this one!) 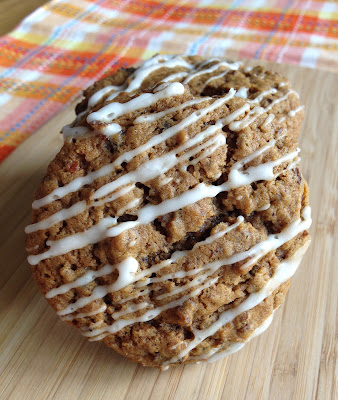 Right at the beginning of this month, one of the work stresses sort of resolved itself.  I'm taking on a new position, which will mean more stress in the short term, but it's a better sort of stress that what I've been dealing with for several months.  It's a pretty big change for me, since I realized that I'd been in my previous role for 7 years.  New location, new people, lots to adjust to.  (plus I'm still helping out my old team for most of this month)  But I'm excited about the change, and I realized that having new (to me) employees has an advantage--more taste testers!  My new team is over twice the size of my old one, so even if some are on diets, there will be others willing to eat baked goods. =)

We had a staff meeting last Monday, and I figured that bringing dessert would be a great way to get off to a good start with everyone.  I wanted to bring a couple of things--something chocolate and something not.  Fortunately, I already had an idea for the non-chocolate one, from one of my favorite sources, King Arthur Flour.  They featured a recipe for Molasses-Raisin Cookies on their blog recently.  I love raisins and spice cookies, and was looking for a good excuse to try the recipe.

The recipe is pretty straightforward to make, using the creaming method.  The one unusual step is that you put the dry ingredients and raisins in the food processor and pulse to chop up the raisins.  I generally avoid using my food processor because I hate to wash it, but I was intrigued by the idea of the small pieces of raisins blending into the cookies better.  So I pretty much followed the recipe as written.  I did make my cookies bigger than the recipe said to--I used my #40 disher, and got two dozen.  Because they were bigger, I baked them for 13 minutes.  I also skipped the coating of sparkling sugar.  Since the blog post suggested lemonade to go with the cookies, I whisked together some lemon juice and powdered sugar and drizzled the glaze over the cookies.

The verdict?  These cookies are awesome. I took them to the meeting along with a batch of brownies, and the cookies were the clear favorite.  The lemon glaze was nice with the spices in the cookies, although I kind of wish I'd applied it with a heavier hand. =)  I can definitely see how these would pair nicely with lemonade.  I like raisins, but since they're chopped up, they're not very noticeable, and might sneak past the raisin haters if you don't tell them they're there.  The cookies definitely wouldn't be the same without them.  I'm seriously considered making another batch of these cookies just so I can crumble them into a batch of lemon ice cream.

If you'd like make these cookies for yourself, you can find the recipe here at King Arthur Flour. 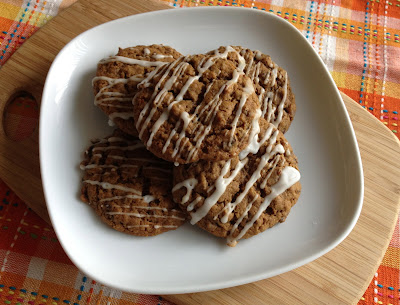 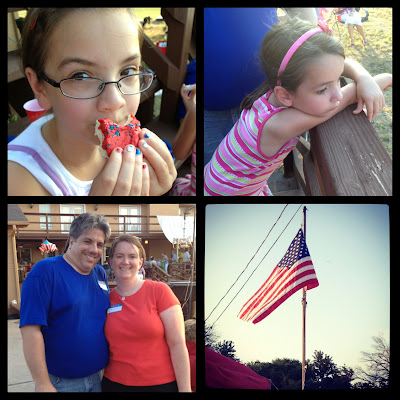