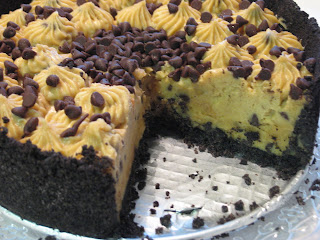 When I was in grade school, my mom would pack my lunch.  That is, up until I started to complain about what was in it.  At that point, she told me to do it myself.  =)  My chief complaint?  I don't like peanut butter and jelly sandwiches.  I like jelly, and I don't mind peanut butter, but I absolutely do not like them together.  Weird, huh?  If I ended up with a PB&J somehow, I'd take it apart and put the jelly pieces together and do the same with the peanut butter sides.
Honestly, I'm not that big a fan of peanut butter at all.  But as I got older, I discovered a different combination--peanut butter and chocolate.  Now if there's chocolate involved, how could it be bad?  My favorite "candy bar" is Reese's peanut butter cups.  And actually, what I like even better is the Reese's peanut butter eggs that you get around Easter.  They have a better ratio of peanut butter to chocolate.  In fact, I'm pretty sure I still have some stashed away where my kiddos won't find them.  It's not too big a worry--Brianna really doesn't like peanut butter that much.  With all the worries about peanut allergies these days, they don't allow it at daycare, so she really hasn't had it very often.  The few times I've tried to give her a peanut butter and jelly sandwich, she's pushed it away.  Or maybe she's just like me and doesn't like the combination.  =)
Anyway, all this talk of peanut butter (and chocolate!) leads us to this week's Tuesdays with Dorie recipe, Peanut Butter Torte, selected by Elizabeth of Ugg Smell Food.  This one looked truly decadent, with a filling of peanut butter, cream cheese and cream, so I knew I didn't want to make a full-size torte.  Naturally, I used that as an excuse to acquire another new piece of bakeware.  I headed down to Sur la Table (one of my favorite places to browse--I could go pretty crazy in there if I had more money to spend) and picked up a 7-inch springform pan.  It was actually pretty inexpensive.  Armed with my new pan, I planned to make half the recipe.
I had to make another special purchase for this recipe.  Oreos.  I almost never buy cookies, because I prefer to make my own.  Plus Oreos are dangerous to have around.  After taking out enough of them for the crust (and eating two or three), I froze the rest to remove temptation.  After reading some of the comments on this week's P&Q, I figured I'd need more than 12 for a good crust, so I used 16, and about 3 tablespoons of melted butter.  That worked quite well.
While the crust was cooling, I started prepping ingredients for the filling.  I mixed together the mini chips, chopped peanuts, epresso powder and cinnamon.  Somehow I totally missed the nutmeg in the ingredients list!  I didn't want too many nuts in my filling, so I only did the 1/4 cup for the "crunch."  All was going well until I started on the mousse.  I didn't feel like pulling out my stand mixer for only half the recipe, so I decided to mix the filling by hand.  I measured out my cup of cream and started whipping it.  But some interaction of my metal whisk and metal bowl (stainless steel, shouldn't have been a problem) caused weird gray bits to show up in my whipped cream.  I tried to figure out a way to strain them out, but finally gave up and started over.  At this point, I realized I only had 3/4 cup of cream left in the fridge, but I decided to wing it.  =)  I also only had 5 ounces of cream cheese, rather than 6.  Oops.  I went ahead and used the full 3/4 cup of peanut butter, so my filling just ended up extra peanut-buttery.  No problem!
I put about three-fourths of my mousse into the prepared crust.  Then to dress things up a bit, I piped the rest on top in stars (sort of).  I had actually decided to pass on the ganache topping, which was good since I was out of cream!  I prefer milk chocolate with peanut butter, and was going to make a milk chocolate ganache instead of a dark one, but forgot to buy more milk chocolate when I was shopping.  So I just topped my mousse with more mini chips.
After all was said and done, Jamie and I got to try the finished product Monday night.  It was extremely tasty, but not something I could eat a lot of in one sitting.  I'll have to wait until this evening to see if Brianna likes it better than PB&J.  =) 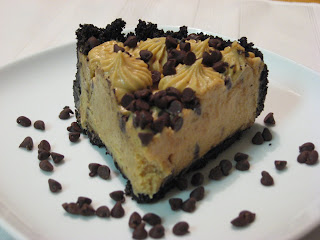 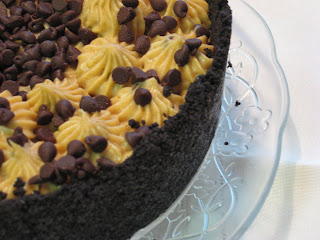 Getting ready: Center a rack in the oven and preheat the oven to 350°F. Butter a 7-inch springform pan and place it on a baking sheet. (I skipped buttering the pan and didn't have a problem.  I also wrapped the bottom of my spring-form pan in non-stick foil before putting the ring on.  It makes for a tighter seal between the bottom and sides and makes it easier to get pieces of the torte out.)
Put the Oreo crumbs, melted butter and salt in another small bowl and stir with a fork just until crumbs are moistened. (I just added the butter to the crumbs in my food processor bowl and pulsed it a few more times.)  Press the crumbs evenly over the bottom and up the sides of the spring-form pan (they should go up about 2 inches on the sides). Freeze the crust for 10 minutes.
Bake the crust for 10 minutes, then transfer it to a rack and let it cool completely before filling.
Toss the chopped peanuts, the sugar, espresso powder, cinnamon, and chocolate chips together in a small bowl. Set aside.
Working with a stand mixer fitted with the whisk attachment or with a hand mixer in a large bowl (I just used a bowl and a whisk), whip the cream until it holds medium peaks. Beat in 2 tablespoons of the confectioners’ sugar and whip until the cream holds medium-firm peaks. Scrape the cream into a bowl and refrigerate until needed.
Wipe out (do not wash) the bowl, fit the stand mixer with the paddle attachment if you have one, or continue with the hand mixer, and beat the cream cheese with the remaining 1/2 cup confectioners’ sugar on medium speed until the cream cheese is satiny smooth. Beat in the peanut butter and the milk. (Again, I just did this by hand.)
Using a large rubber spatula, gently stir in about one quarter of the whipped cream, just to lighten the mousse. Still working with the spatula, stir in the crunchy peanut mixture, then gingerly fold in the remaining whipped cream.
Scrape the mousse into the crust, mounding and smoothing the top (I put about three-fourths of the mousse in the crust, and then piped the rest around the top).  Scatter mini chips on top of the mousse.  Refrigerate for at least 4 hours, or overnight; cover with plastic wrap as soon as the mousse firms.

When the ganache is firm, remove the sides of the Springform pan; it’s easiest to warm the pan with a hairdryer, and then remove the sides, but you can also wrap a kitchen towel damped with hot water around the pan and leave it there for 10 seconds. Refrigerate until ready to serve. 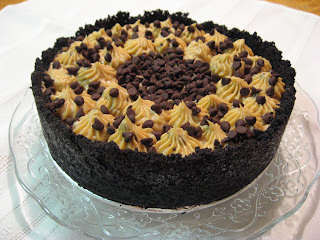