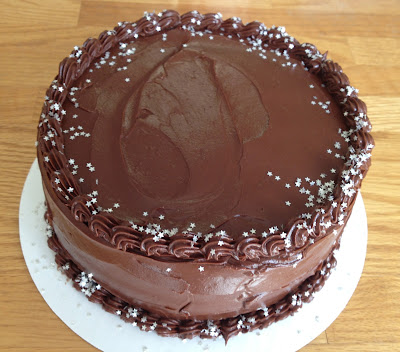 I don't have a whole lot to write about today.  As my husband said when I asked him how he was doing, "It's Thursday."  That day when we're all exhausted but it isn't quite Friday yet.  And I do mean exhausted.  I went upstairs to check on Gillian, because she was taking forever to come downstairs after taking her shower.  I found her lying on the bathmat, wrapped up in her hooded monkey towel, sound asleep.  I admit, I thought about taking a picture. =)  But instead, I manage to rouse her enough to get the towel off and her pajamas on.  She pretty much sleepwalked to her room--I'm not sure she was actually awake.

In other news, I took cake to work today for one of my employees, since it was her last day with us.  She loves yellow cake with chocolate frosting.  Since that's a favorite of mine as well, I was happy to make it for her.  I actually tried two new recipes for this one.  The cake is the Golden Vanilla Cake from King Arthur Flour.  I made the full recipe and ended up with two 8" rounds and half a dozen cupcakes.  For the frosting I wanted something that wouldn't overpower the cake.  I went with the Foolproof Chocolate Frosting from Cook's Illustrated.  It uses milk chocolate, which seemed like a good match for the vanilla cake, and also cocoa powder, so it's still really chocolatey.  (I was actually a little short on milk chocolate, so I made up the difference with a bit of bittersweet.)  The final combination of cake and frosting was really good, and well-received by everyone at work.  I'll be making this one again. =)

Forgot to add--the stars are edible glitter, which you can find here.