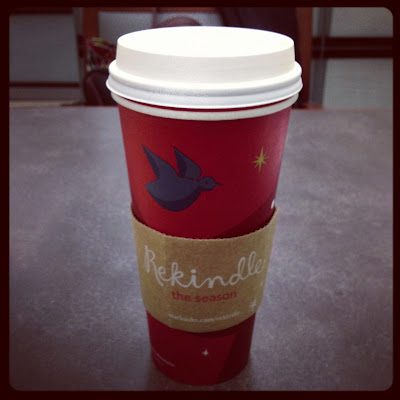 I'm so glad that it's Friday and that I don't have to work tomorrow.  It's been a long week.  I wasn't moving that well this morning, so instead of making my tea at home and taking it in my travel mug, I stopped at Starbucks.  Anticipating that it would be a crazy day, I went for the big cup. =)  The holiday cups are out, and those always seem so cheery.

Figuring everyone at work would also need a pick-me-up to get through the day, I made them some breakfast.  I don't think I've brought this group scones before.  King Arthur is one of my main sources for scone recipes, and they were featuring pumpkin scones this morning.  I had canned pumpkin and cinnamon chips in the pantry, so I was all set.  I'm definitely becoming a fan of freezing the scones before baking.  The scones end up having a great texture--there were lots of raves at work.  (Plus it works out--I can mix and shape the scones, throw them in the freezer, and shower while they chill and the oven preheats.)  I had one person comment that she wanted to know what my pantry looks like, that I can whip up something like this on a moment's notice. =)

The only downside to the scones is that the nurse at Gillian's school was rather disturbed this morning.  It seems that G picked up a stomach bug, and the nurse isn't used to the results from a student eating something orange for breakfast...  So wish me luck for the weekend.  I really hope no one else comes down with it and that our plans aren't derailed any more than they already have been.  G is already on the mend and asking to eat something besides saltines because she's starving.  Keeping my fingers crossed. 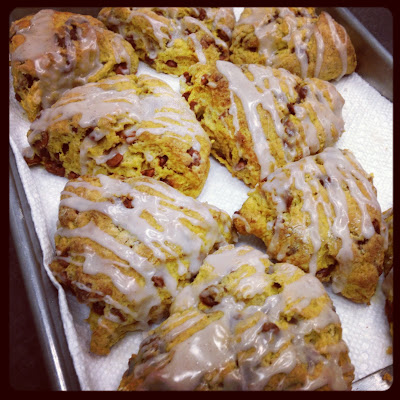