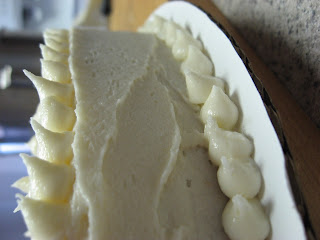 ...Good times never seemed so good...
Thanks to this month's Daring Bakers challenge, now you, too, can have Neil Diamond stuck in your head all day. =)  After a couple months of savory challenges, we're back to sugar.  More specifically, caramel!
I recently discovered the joys of salted caramel, so I was happy with this month's challenge.  We had to make Caramel Cake with Caramelized Butter Frosting from a recipe by Shuna Fish Lydon.  Aside from having to make both the cake and frosting recipes, we were given a lot of freedom in this challenge--we could choose any shape, size, flavorings and decorations that we wanted.  I thought about making cupcakes, but in the end, decided to make a traditional layer cake.
The first step was to make caramel syrup, since it was an ingredient in both the cake and frosting.  After my past misadventures with caramel, I was particularly careful while making the syrup.  After reading Shuna's additional tips on the Daring Bakers board, I went ahead and added a bit of corn syrup to the water and sugar mixture for a little added insurance.  And when it came time to add the water to the caramelized mixture, I used a tip from Linda of Linda's Window.  She recommended cutting a hole in a sheet of aluminum foil, laying the foil on top of the pan, and pouring the water through the hole.  Worked like a charm to avoid being splattered with molten sugar.  Once I was done, I realized that I probably should have let the syrup get a bit darker, but it had a lovely caramel flavor. 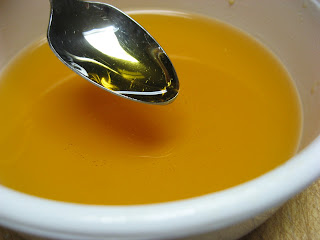 On to the cake...  The batter was pretty straightforward to mix.  The recipe cautions that all the ingredients should be at room temperature, so I made sure to take everything out of the fridge ahead of time.  I baked my cake in a 9" x 3" round pan coated with baking spray (Pam for Baking is my friend) and lined with parchment.  I baked it for a total of 40 minutes, and it came out great.  The cake was a bit domed when I took it out of the oven, but as it cooled, the top settled until it was level.
Next came the frosting.  A major component of the frosting is browned butter.  I melted my butter in a heavy saucepan, watching carefully so I wouldn't burn it.  Once I could see the bits of milk solids on the bottom of the pan turning golden, I turned off the heat and let it sit until it got just a bit darker (the residual heat of the pan is enough to keep it going for a bit).  Then I poured the butter through a coffee filter into a heat proof bowl.  I knew that I wanted a firm frosting rather than a looser icing, so after the butter had cooled on the counter a bit, I put it in the fridge so it would solidify.  Then I put it in my stand mixer and used the paddle to beat in the other ingredients.  I ended up using the full amount of powdered sugar (16 ounces), 4 tablespoons of heavy cream, 3 tablespoons of caramel syrup, about a teaspoon of vanilla, and a scant teaspooon of kosher salt (sounds like a lot, but it tasted great). 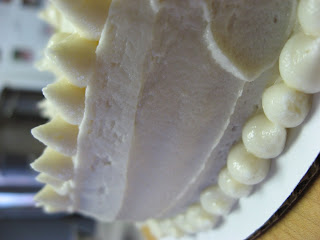 To assemble the cake, I used my serrated knife to carefully slice the cake in half.  I put a thin layer of frosting between the cake layers and then frosted the top and sides of the cake, again not making the frosting too thick.  My decorating skills need some work, but it came out okay. =)
The verdict?  I only got a small taste of the finished cake, since I gave it away.  I took it to Gillian's daycare as a treat for all the teachers right before Thanksgiving.  They cut into it immediately and offered me a piece.  The cake was delicious.  Very moist, and with a dense texture.  I expected that, since the ingredient proportions were very similar to a poundcake.  Although a number of other Daring Bakers thought the cake was too sweet, I thought it was fine.  The frosting was definitely very sweet, but in a small piece, it complemented the cake nicely.  The browned butter gave it a wonderful flavor, and I loved the mix of salty and sweet.  I would happily make both again, although I'd probably use less powdered sugar in the frosting.
Oh, and I forgot to mention...  The leftover caramel syrup is wonderful in tea. =)
Be sure to check out the Daring Bakers blogroll for more wonderful caramel cakes.  Shuna Fish Lydon’s recipe can be found here.  And thanks to this month's hosts, Dolores of Chronicles in Culinary Curiosity, Alex of Blondie and Brownie, and Jenny of Foray into Food (plus assistance with alternative baking questions from Natalie of Gluten-a-Go-Go). 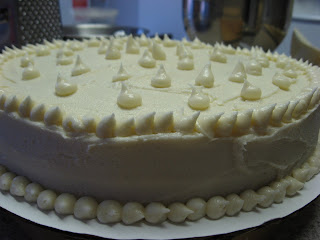