Black and white and rice all over 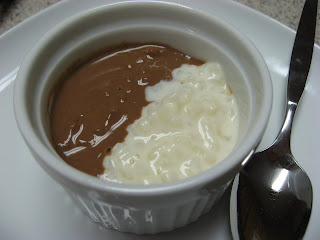 Okay, let me just come out and say it...  I'm a picky eater.  I always have been.  I will say that I've gotten better as I've gotten older.  I'm generally willing to try something at least once.  And there are quite a few things that I wouldn't eat as a child that I like or am at least okay with now.  There are some things that I won't eat because I just don't like the flavor (coconut being a big one).  But I've come to realize that for most of the things I dislike, it's the texture that gets to me.
One big category of things I don't care for is hot cereal-type dishes.  Oatmeal.  Cream of wheat.  Polenta.  (Though I want to like that one, so I occasionally give it another try.)  And rice pudding.  Which is unfortunate, since this week's Tuesdays with Dorie recipe is Arborio Rice Pudding, White, Black (or Both), chosen by Isabelle of Les Gourmandises d'Isa.  Dorie's recipe does have a few things going for it.  It uses arborio rice, which I do like.  And there's a chocolate version, so how could it be all bad?  My husband does like rice pudding, so I figured if I made it, at least he'd eat it.
I still almost bailed on this one.  Not so much because I wasn't sure I would like it, but more because I wasn't sure I had the time to make it.  It takes over an hour to cook, and unlike last week's Kugelhopf, you actually have to pay a fair bit of attention to it for most of that time.  And then it has to chill for quite a while (the recipe says at least 6 hours).  I worked all day Saturday.  I ran out of time on Sunday.  And I knew I had to work late on Monday.  It wasn't looking too good... 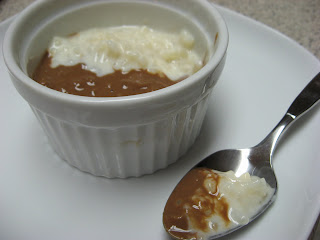 But I managed to squeeze it in.  Since I was working later on Monday, I didn't have to go in until after 10:00.  I took Brianna to school and Gillian to daycare, and then headed home to finish getting my stuff ready for work.  I had just enough time to make the pudding.  Well, almost.  It was going to be close, so I didn't even bother with trying to cook it on low.  I let it bubble away over medium heat, skimming the top as needed.  It thickened up nicely in about 45 minutes.  I made a few changes to the ingredients, too.  I didn't have quite enough whole milk, so I used 2 cups of whole milk and 1 cup of 1% milk (only 3 cups total, instead of 3 1/4).  I added a bit of salt, as well.  I split the finished pudding between 2 different containers and added some vanilla extract to one (maybe a teaspoon), and 1 1/2 ounces of chocolate (58% Ghirardelli pieces) to the other.
The verdict?  Well, I didn't hate it.  But I'm not sure how much I like it.  The flavor of both versions is great.  It's that darn texture thing that's still turning me off.  Gillian ate a bite or two, but that's all.  She was pretty tired, though, so she might eat more another time.  Brianna didn't like the rice.  She wanted to know if I could dish some up for her without the rice.  Sorry, not gonna work with this one... =)  I'll have to make her some regular pudding this weekend to make up for it.  Jamie, as predicted, liked both versions.
Will I make this again?  Probably not, unless I get a special request.  But I'm glad I gave it a try.  For the full recipe, head on over to Isa's blog.  And to see how the rest of the TWD bakers fared, checkout the Tuesdays with Dorie page for links to the various blogs. 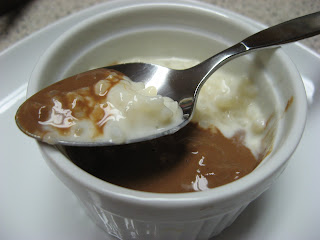