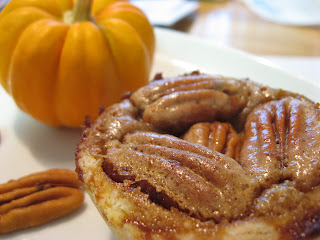 This has been an odd week.  Usually I'm sitting here on Monday night trying to finish up my TWD post so I can get to bed.  But this week, because of the holiday, our fearless leader, Laurie, allowed us to post late, which I appreciate, since I didn't even make the recipe until yesterday.  Nothing like leaving your holiday baking to the last minute... =)
I don't really like pumpkin pie.  I like lots of other pumpkin things, but don't really like the custardy texture of the pie.  (Yes, texture again, just like with the rice pudding.)  And pecan pie doesn't appeal much either--too sweet.  But my husband Jamie likes both, so I figured that he would help me eat this week's TWD recipe--Thanksgiving Twofer Pie.  Basically, the idea is that you put pecan pie filling on top of pumpkin pie filling, and hopefully make everyone happy.  =)
One nice feature of baking later in the week is that I was able to check out some of the cool things that other people did.  One that particularly caught my eye was Pink Stripes.  I really liked the idea of making mini pies, since I love crust, and that way if I didn't like the filling there wouldn't be as much of it. =)  For the crust, I used a favorite recipe of mine from Cooks Illustrated.  For those who subscribe to the website, it can be found here.  It's an all-butter crust that uses the technique of fraisage (smearing the dough against the counter) to make a strong, flaky crust.  After the dough chilled, I rolled it out and used my biggest round cutter (about 3 3/4 inches in diameter) to cut out circles of dough.  I carefully pressed them into the cups of a muffin tin that I had sprayed with baking spray (Pam for Baking, Cathy!)  I then put the muffin tin in the freezer while I prepared the fillings.
I pretty much followed the recipe for the fillings.  The pumpkin one came together quickly in the food processor.  I did make one change to the pecan mixture, which was to use Lyle's Golden Syrup instead of corn syrup.  I spooned the pumpkin mixture into each of the muffins cups.  For most of them, I made sure to leave room for the pecan mixture, but I did make two just pumpkin, for my children who don't really like nuts.  =)  Then I placed several pecan halves on top of the pumpkin and spooned the syrupy brown sugar mixture on top, making sure not to fill the cups too much.  Since my ratio of filling to crust was different than in a regular pie, I had some of the filling mixtures left over, so I filled a couple of 4-ounce ramekins with the excess. 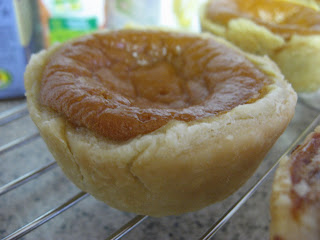 I deliberately didn't pre-bake the crusts, since I didn't want the top edges to brown too much.  So to make sure that the bottoms browned well and didn't get soggy, I placed the muffin tin directly on my preheated baking stone.  I baked my mini pies for 10 minutes at 45o degrees F, and then turned the temperature down to 300 degrees F and baked them for another 20 minutes.  They turned out great.  I let the pies cool for a few minutes in the pan, but then carefully loosened them and transferred them to a rack to cool completely.  I was afraid that if I left them in the pan, they'd get stuck.
The verdict?  I was surprised to find that I really liked the combination!  This was definitely a case of the result being more than the sum of the parts.  And I liked the mini pie variation a lot.  As expected, Jamie liked them a lot, too.  We had Thanksgiving dinner with some friends of ours, and they seemed to enjoy them as well.  At least, they didn't complain when I offered to leave some of the extra pies there! =)
Thanks to Vibi of La Casserole Carrée for choosing this week's recipe.  Even though she's not American, she was kind enough to select something that the American members of Tuesdays with Dorie could make for the Thanksgiving holiday.  You can find the recipe here, on Vibi's blog, or of course in Baking From My Home to Yours. 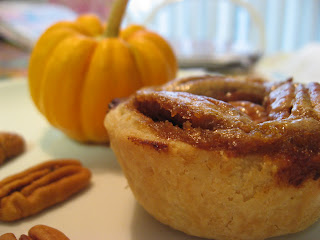