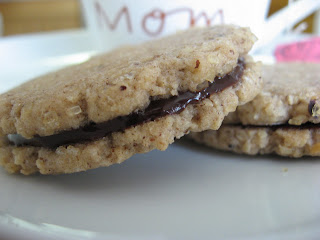 How did it get to be December already?  Time really seems to be getting  away from me.  Which might be why it's taken me until Tuesday morning to actually bake this week's Tuesdays with Dorie recipe.  This week's recipe of Linzer Sablés was chosen by Noskos of Living the Life.  I'm not a big fan of making cut-out cookies, so that might also be why it took me so long to make these cookies.
The dough itself was easy to mix up.  I'm fortunate enough to shop at a store with a great bulk department, so I was able to buy hazelnut meal to try in these cookies.  Since I was down to the wire, I didn't change anything with the ingredients, though another time I might play around with the spices (Dorie calls for cinnamon and a bit of cloves).  Rather than roll the dough out and chill it, I took the easy way out.  Or so I thought... =) 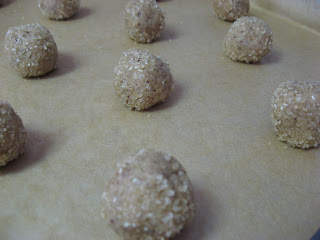 I scooped the dough out with my #70 disher, and rolled it into balls.  Then I rolled the balls in turbinado sugar and placed them on a baking sheet.  I put them in the oven, but then realized that they might not flatten out enough.  So I pulled the sheet back out of the oven and flattened the balls with the bottom of a glass.  Which was where things got a bit difficult--the dough stuck a little to the glass.  I thought it was because the dough was warm.  Turns out, that might have made it easier--when I did the second sheet with colder dough, they stuck a lot worse.  Something to figure out for next time.  I baked them for about 12 minutes, just until they were getting brown around the edges.
I thought chocolate would be good with the hazelnut in the cookies, so while they were baking, I mixed up some ganache.  A least that was easy.  When the cookies were cooled, I sandwiched a few of them together with the chocolate. 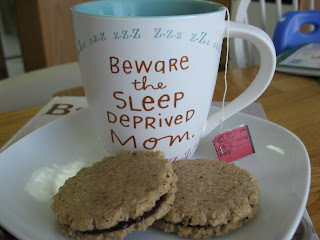 one of my favorite teas is Tazo Awake; not sure how much it helps with the sleep-deprivation, but it tastes good =)
The verdict?  I'm still not sure on this one.  I liked the taste of the dough. =)  I think the flavors need more time to meld, which might be because I didn't chill the dough at all.  And a lot of times spice cookies are better after a day or two.  I'll have to see what I think of these tomorrow.  I liked them with the chocolate.  I think I'll do a few with jam as well, so see if I like them that way.  (I only sandwiched a few to take pictures.)  And none of my other taste testers are here right now.  (I have the day off; Jamie's at work and the girls are at school.)
Thanks to Noskos for this week's recipe--it was something I haven't tried before, which is always fun.  You can find the recipe on his blog.  And of course, you can check out lots of other cookies from the other TWD members if you check out the blogroll. 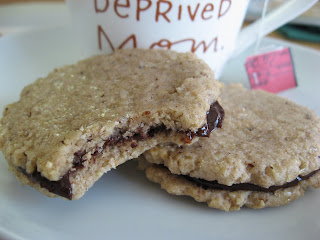