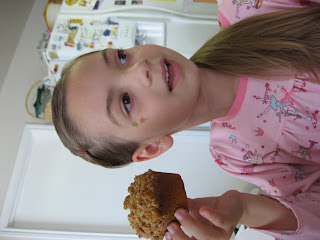 I figured it was time to give Brianna some airtime.  With her birthday being only a few weeks past, Gillian's been getting a lot of attention, both on my blog and in general.  Brianna's pretty put out because Gillian keeps getting packages in the mail that turn out to be new toys.  Never mind the fact that they're toys aimed at 2-year-olds; Brianna wants to play with them because they're new and they're Gillian's.  Which of course has led to lots of squabbling around here.
With the time change this morning, I was afraid that they'd both be up at the crack of dawn, but it wasn't as bad as I feared.  Brianna made it to almost 7 o'clock (new time).  Since Gillian was still asleep, we headed downstairs so Brianna could watch cartoons and I could contemplate what to make for breakfast.  Muffins are something I often turn to on Sunday mornings, since they're pretty quick to mix together and make enough so I have breakfast during the week.  I asked Brianna what kind she would like.  She immediately said that she wanted me to make the pumpkin ones again, with the chocolate chips.  I was kind of hoping to try something new, but she was really insistent.  I couldn't really complain--she was volunteering to eat something fairly healthy.  =) 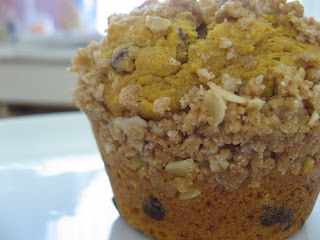 I did change things up a little bit.  As with the last time I made them, I used half all-purpose flour and half white whole wheat.  Unlike last time, I didn't increase the salt (though I should have).  I didn't have any buttermilk (well, there's some in my fridge, but it's way past the sell-by date and really needs to go away), so I substituted sour cream.  I did the whole batch as chocolate chip, mixing in 1/4 cup of mini chips.  When I was checking out everyone else's TWD pumpkin muffins, I ran across several with streusel on top.  That sounded like a good idea to me.  So I looked through my copy of Great Coffeecakes, Sticky Buns, Muffins & More for some ideas.  I found a recipe for a Brown Sugar Whole Wheat Streusel that looked like it would be a good match for these muffins.  I cut it back a bit, since the original recipe made enough for 16 muffins and I was only making a dozen. 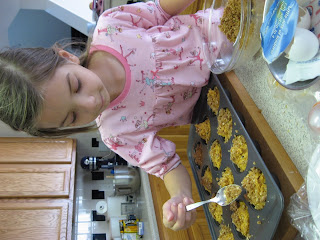 Brianna was going to help me with the whole thing, but she threw a major tantrum (an all too frequent occurrence of late) over which one of us was going to spray the muffin tin with baking spray.  She was temporarily banished to her room, but was allowed out in time to add the chocolate chips and put the streusel on top of the muffin batter.  We baked the muffins for 20 minutes, let them cool in the pan for about 5 minutes, and then held out for another 10 minutes or so.
The verdict?  The streusel was definitely a good addition.  The muffins did need more salt, but they were still good.  Brianna really enjoyed hers.  I don't know if they've replaced the coffeecake muffins as her favorite, but they're up there.  If you want to give them a try, you can find the original pumpkin muffin recipe here.  The streusel is available here on Carole Walter's website.  Here are the ingredients I used:
Muffins:
1 cup (4 1/2 ounces) all-purpose flour
1 cup (4 1/2 ounces) white whole wheat flour
2 teaspoons baking powder
1/4 teaspoon baking soda
1/2 teaspoon salt
3/4 teaspoon ground cinnamon
1/2 teaspoon ground ginger
1/8 teaspoon freshly grated nutmeg
1 stick (8 tablespoons) unsalted butter, at room temp.
1/2 cup sugar
1/4 cup (packed) light brown sugar
2 large eggs
1/2 teaspoon vanilla extract
3/4 cup canned unsweetened pumpkin puree
1/4 cup sour cream
1/4 cup mini chocolate chips
Streusel:
1/4 cup (1/2 stick) unsalted butter
1/3 cup rolled oats
1/4 cup light brown sugar
1/4 cup white whole wheat flour
1/4 cup all-purpose flour
1/2 teaspoon cinnamon
1/4 teaspoon salt 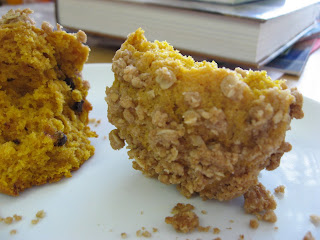