For all the baking I do, I don't have a taste for really sweet stuff. I love chocolate, and all things bread.  But things that are just sweet don't hold much appeal for me.  Case in point, caramel.  I admit, it's pretty tasty, but I could generally take it or leave it.  No more.  And all because of a little salt.
I've seen a variety of references to salted butter caramel on different food blogs.  So last month when I was making Dorie's Caramel Peanut (Pecan) Topped Brownie Cake, I added a bit of kosher salt to the cream when I was making the caramel.  The cake was okay, but the leftover caramel was outstanding.  I had no idea adding salt to something could make it so addictive.  I more or less ate the leftover caramel with a spoon (over a period of days, at least, not all in one sitting!).  My husband will undoubtedly be amused when he reads this, since he's long been a fan of the sweet/salty combination. =)
Where am I going with this?  We had a get-together for work this weekend.  As is often the case, I volunteered to make dessert.  When I asked my boss what she would like, she thought for a bit.  And then she had a brainstorm--"I've got it!  Can you make pumpkin cheesecake?  But  sort of a turtle cheesecake, with chocolate and caramel?"  Of course I can! 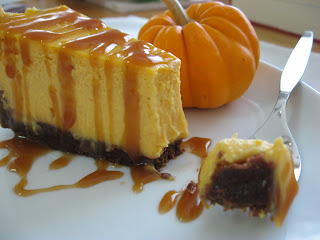 My favorite cheesecake recipe is from Rose Levy Beranbaum.  The recipe is in The Cake Bible, but I usually make the version she offered in Fine Cooking back in 1999, which is basically the same except that it uses 6 yolks in place of 3 whole eggs.  In that same Fine Cooking article, she gave a pumpkin cheesecake recipe as well, but I'd never tried it.  I wanted to make a chocolate crust, but instead of using a crumb crust, I decided to go with a chocolate pâte sucrée, since I find that crumb crusts on cheesecake tend to get soggy.  I blind baked it and then spread a layer of caramel on top of the crust before pouring in the batter.
The verdict?  Everyone seemed to really enjoy it.  The cheesecake was creamy and delicious.  The pumpkin wasn't overpowering, and it was nice to have it on its own, with no distracting spices.  The caramel layer got a bit too liquidy, so it started to leak out once I'd cut the first piece of cheesecake.  It was definitely tasty, though.  The crust worked well in that it was definitely not soggy.  I think I'll add a bit more salt to both the crust and filling next time.  I had leftover caramel, so I drizzled some on each piece as it was cut.  And there are still a few spoonfuls left for me. =) 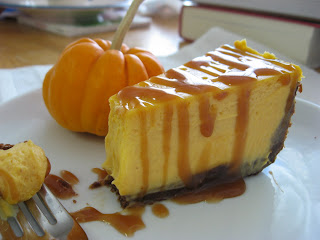 The recipe for the cheesecake filling can be found here.  For the crust, I used the chocolate pâte sucrée recipe from The Pie and Pastry Bible, but any similar recipe should work just fine.  For the caramel that was layered under the cheesecake filling and drizzled over the top, I used the caramel from Dorie Greenspan's Caramel Peanut Topped Brownie Cake as a starting point and changed it around a bit.  Here's my version of it.
Salted Caramel Sauce
1/4 cup plus 2 tablespoons (3 ounces) water
1 1/2 cups (10 1/2 ounces) granulated sugar
1 tablespoon light corn syrup
2/3 cup heavy cream
1/4 teaspoon kosher salt
2 tablespoons cold unsalted butter, cut into four pieces
Place the water in a heavy saucepan.  Pour the sugar into the center of the water, slowly enough that it all gets wet as you add it.  Stir in the corn syrup.  Put a lid on the pan and heat the mixture over medium high heat until it boils.  Meanwhile, put the cream in a measuring cup with a spout and stir in the kosher salt.  Once the sugar syrup is boiling (you'll be able to tell because you can see steam escaping from under the lid), you can remove the lid.  As the water boils off, the syrup will get thicker and the bubbles will get bigger.  Continue heating until the syrup starts to turn amber.  Once it reaches the color you want (too pale and it won't taste as good, but too dark and it'll be bitter), remove the pan from the heat.  Very carefully and somewhat slowly, add the cream to the pan.  The mixture will bubble extremely vigorously--stay back so you don't get scalded by the steam.  Once the bubbles subside a bit, stir the mixture until smooth.  Add the butter pieces and stir until they have melted and blended into the caramel.  Pour the caramel into a heatproof container.  Allow it to cool until just warm before refrigerating. 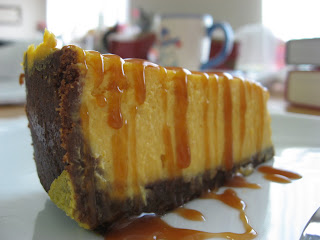