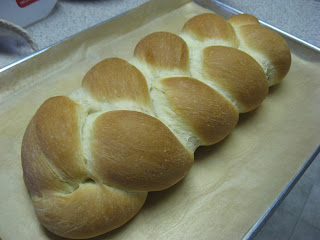 One of the things I've been trying to do is read more with Brianna. We worked our way through several "chapter books" last summer and during the school year. We read up to one chapter per day (some long ones take a couple days), averaging 3-4 chapters per week. Sometimes I read to the girls while they're in the bathtub. Sometimes I read while they're eating dinner (on days when I'm feeding them early while Jamie & I eat later). Lately Jamie and I have been thinking that we need to split things up and take turns--one of us can read with Brianna while the other reads to Gillian. But we haven't gotten started with that yet.
I started with books that I enjoyed reading as a child. The first book we read last summer was Charlotte's Web, after I found a copy at Half Price Books. Then we moved on to The Lion, the Witch and the Wardrobe, and later Prince Caspian. (That was easy, since I already had that whole series.) I figured we could start off with me reading the early books in a series, then work up to having Brianna do some of the reading herself. We haven't been doing as well this summer, though we just recently started on Little House in the Big Woods. (And I picked up several more books in the series at the same time, so we can keep that one going for a while.)
Another series that we started on last summer and continued during the school year was the All-of-a-Kind Family books. Written by Sidney Taylor, they're stories about a New York Jewish family in the early 1900s. The family has five girls, so I found them quite interesting, as the oldest of four girls. And it's fun to read them to Brianna, trying to explain how things were different a century ago. Those books were probably the first time I read about Jewish traditions and food, including challah.
Which brings me to the latest bread in the BBA Challenge. Like the past several breads, challah is an enriched bread, but with a lot less fat. This particular recipe uses an ounce of oil, along with a couple of eggs and a couple of egg yolks. All the eggs yolks give challah it's traditional golden color. Also traditional is the shaping--usually braided. I went with a simply three-strand braid, though more complicated 4 or 5-strand braids can be made as well. 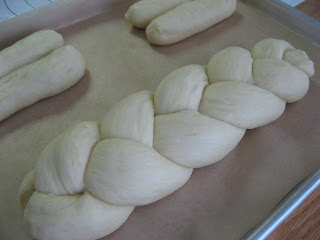 The dough is straightforward to mix. It's quick as well, since there's no preferment. The dough is very nice to work with (PR describes it as "soft, supple but not sticky"), and I made it by hand rather than with my stand mixer. I did add some additional flour while kneading to keep it from getting too sticky, but tried to get away with as little as possible. My total dough weighed about 33 ounces when I was done. I needed buns for hot dogs, so I used a portion of the dough to make some--four buns at 3 ounces each. I divided the remaining 21 ounces of dough into three 7-ounce portions, which I then formed into ropes for braiding. It took a little while to roll them out to the length I wanted. I would roll one strand, then let it rest while working on the other two, then return to the first one to roll some more. I repeated this process several times until they were long enough. 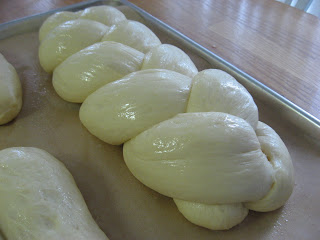 Fortunately, I don't seem to have any problems braiding dough. (I've certainly had lots of practice braiding hair, both on my own head and for my girls.) For a three-strand braid, I do start in the middle and braid to one end. Then I braid the other end, being careful to cross the strands underneath each other rather than on top so the braid comes out looking right. One thing that I always seem to forget is the egg wash, though. Fortunately, my dough still browned nicely--it just wasn't as shiny. The baking time was fairly quick, too. My buns took 20 minutes and the loaf baked for 30. 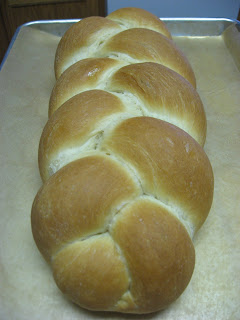 The verdict? Good, but not my favorite. We all tried the hot dog buns. I think this is a good dough for something like that--nice fluffy interior, but sturdy enough on the outside to contain everything. Some of the other hot dog buns I've made were too dense. Brianna and Gillian didn't eat that much of their buns, but that's not unusual (they were too busy eating French fries). As for the bread itself, I liked the texture, but thought the taste was a bit bland. I've made challah once before (recipe from ABin5). That recipe used butter instead of oil, and I liked the flavor a lot more.
Be sure to head over to the BBA blogroll to see what everyone else has been up to. The main group is quite a bit further along. I'm baking with the Slow & Steady sub-group, at a pace of one bread every couple of weeks (rather than every week). Nancy has been kind enough to put together round-ups for us, so be sure to check out her blog. Next up, ciabatta! 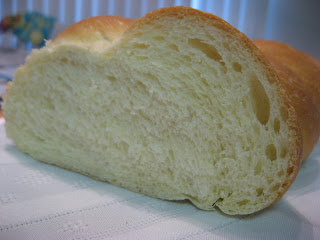