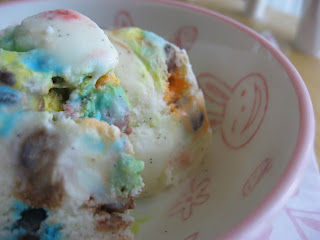 Quick post this time, since I'm already running late for an event... I was happy to see a post a couple weeks ago from Linda of make life sweeter! saying that she was going to reprise a blog event that she did last year for World Breastfeeding Week. The theme is simple--make a sweet dish using milk of any sort. I participated last year with Dorie Greenspan's Ganache Ice Cream. Since World Breastfeeding Week falls in August (1st through 7th, which is why I'm late), ice cream seemed like a good idea again, especially since we're still having a heat wave here in central Texas (something like 45 days of 100+ weather this summer--ugh!).

I know it's not for everyone, but I'm very glad that I was able to breastfeed both my girls for a long time. It certainly wasn't easy at first, and pumping at work during the first year (for each of them) was a pain. But I know that the benefits were worth it. Plus it was so nice when feeding them at night or away from home not to have to mess with bottles and stuff. I'm sure I got a few funny looks over time, since I nursed them (discreetly, of course) in lots of different places--airports, restaurants, park benches, dressing rooms... the list goes on. Thankfully I never had any bad experiences at all. Like with most things, I was probably more worried about it than I needed to be.
Now on to one of my girls' current favorite forms of milk. =) Thanks to some bloggy friends of mine and my new supply of vanilla beans, I've been playing around with vanilla ice cream. Most recently, I made Dorie's vanilla ice cream, which is a custard-based ice cream, for TWD. But through some Twitter conversations with the bloggy friends, I was introduced to David Lebowitz's Philadelphia-style ice cream. Philadelphia-style ice cream is quite simple to make, consisting of cream, milk, sugar and flavoring. I used one of my new Bourbon beans (since I tried the Tahitian for TWD). Since this one was aimed at my kids, I stole an idea from Tracey and added some mini m&ms. Next time I'll chill the m&ms before adding them, since the colors melted more than I wanted when the room temp candy hit the frozen ice cream. 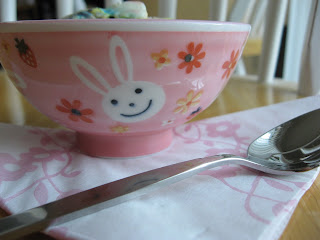 The verdict? Everyone loved it! Brianna and Gillian both love m&ms, so that was really no surprise. And Brianna was happy to see that I was taking pictures of the ice cream in her bowl this time. =) I really like the flavor and texture of custard-based ice creams, but I'm slowly being won over to the ease of making Philly-style ones. =)
Linda is very busy, with a 2-month-old baby and a new home, but I know that she'll put together a wonderful round-up when she finds the time. Be sure to head over to her blog to check it out. 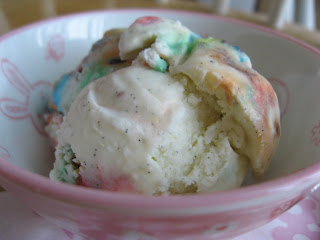 Rainbow Vanilla Ice Cream
(adapted from The Perfect Scoop by David Lebowitz)
1 vanilla bean
3/4 cup (5.25 oz) granulated sugar
2 cups (16 oz) heavy cream, divided
1/4 teaspoon kosher salt
1 cup (8 oz) whole milk
1/3 cup mini m&ms, chilled
Place the sugar in a medium saucepan. Split the vanilla bean lengthwise with a paring knife. Then use the back of the knife to scrape the seeds from the pod. Add the seeds to the sugar and rub the two together with your fingers until the seeds are evenly distributed. Stir in 1 cup of the heavy cream, then add the salt and the vanilla bean pod. Warm the mixture over low heat until the sugar is dissolved. Remove the pan from the heat, then stir in the remaining cream and the milk. Transfer the mixture to a covered container and chill thoroughly in the refrigerator (or in a bowl set in an ice bath if you're in a hurry).
Once the cream mixture is very cold, remove the vanilla bean and freeze the mixture in an ice cream maker according to the manufacturer's instructions. When the ice cream has reached a soft-serve consistency, transfer it to a container to finish freezing. Place about a quarter of the ice cream in the container, then sprinkle over a handful of mini m&ms. Repeat the layers until you've used all the ice cream and m&ms. Freeze until the ice cream is firm. Makes about 1 quart. 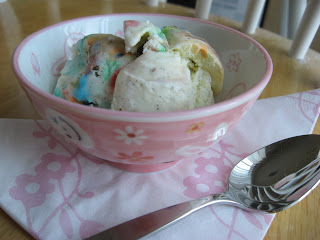