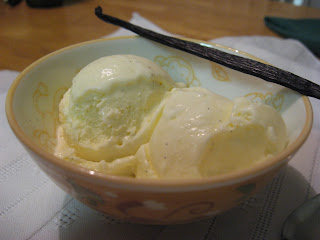 A recent post by one of my blogging friends, Caitlin, got me thinking. She was wondering about what gets people into blogging and how they find their own blogging "voice." And my friend Nancy also posted about some of her observations from her past year of blogging. As I was thinking about both of these, I realized something. Yeah, some people think it's weird that I take pictures of food that I make and write about it. And like Nancy mentioned in her post, I'm sure they also wonder about the fact that I "have to" bake things and then I give them away. But even before I started the whole blogging thing, people were sometimes amazed at the things that I made from scratch. And I get that even more now, what with making all my own bread and other things. So I'm curious--what got all of you into baking and cooking all the things that you eat? 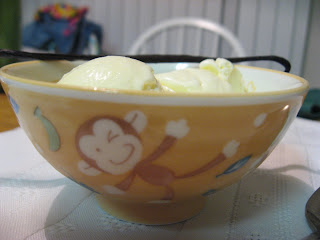 For some people, it's because they want to know what goes into the food they eat. For some, it's just the challenge. For others, it's a way to save money. And for a lot of people, me included, it's all these things (and probably others). While it's not my primary motivation, the saving money is a nice side benefit. Sure, I'd bet I spend a lot more on groceries every week than a lot of people I know. Or do I? I like to buy quality ingredients, but maybe they're not always more expensive than ready-made food or stuff from a box. And because I cook and bake a lot, I pretty much always take leftovers for lunch. We seldom eat out, except sometimes on special occasions.

I really started thinking about the whole cost thing as I was buying the ingredients for this week's Tuesdays with Dorie recipe. Lynne of Cafe Lynnylu picked Vanilla Ice Cream for us to make this week. Sure, it's fun to make your own ice cream, but is it really cost-effective? Now I knew this recipe was coming, since we get the whole month's recipes at once. So I started thinking ahead about what I would need. A few weeks ago, I needed vanilla beans for another ice cream recipe. Two beans set me back $7.69. (ouch!) And that was the best price I could find locally. Knowing that I wanted to experiment more with vanilla, I knew I had to find a less expensive way to buy vanilla beans. I put out a request for ideas on Twitter, and Clara came to my rescue. She recommended The Organic Vanilla Bean Company. Much more reasonable than my local store. I ordered a sampler of 20 beans, 10 each Tahitian and Bourbon. $15 including shipping, so the cost works out to $0.75 per vanilla bean. And quick--I ordered Saturday and had them Thursday.

I don't often break it down precisely, but here's the tab for my ice cream making this weekend:

When you consider that you can buy a half-gallon of your average ice cream for about $5, that seems a bit high. But really, what we made would be more accurately compared to a premium brand like Ben & Jerry's or Haagen Dazs. And those run about $3 a pint. So really, not bad! And knowing exactly what goes into your ice cream and being able to customize it if you want is definitely priceless. =) 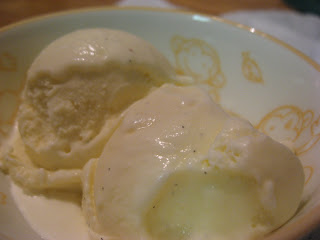 As for the actual making of the ice cream, I did tweak things slightly. I decided to try one of the Tahitian vanilla beans, since I don't think I'd tried one before. After splitting the vanilla bean and scraping out the seeds, I added the seeds to the sugar called for in the recipe. I rubbed them into the sugar so they would be more evenly dispersed. (Thanks to Wendy for the idea!) I put the bean itself into the cream and milk and heated the mixture in a double boiler. Meanwhile, I whisked my newly made vanilla sugar into the egg yolks. When the cream mixture was hot, I tempered it into the yolk mixture, then returned the whole thing to the double boiler. I also added a pinch of kosher salt. I heated the custard to about 175 degrees F, at which point it coated the back of a spoon. I let the mixture cool off somewhat, then put it into a container to chill in the fridge overnight. I actually left the vanilla bean in the custard the whole time. The next morning, I removed the vanilla bean and poured the custard into my ice cream maker to churn. It yielded a bit more than the quart that the recipe says (about 5 cups). I rinsed off the vanilla bean, let it dry overnight, and added it to my container of vanilla sugar (which will now be a mix of Tahitian and Bourbon). 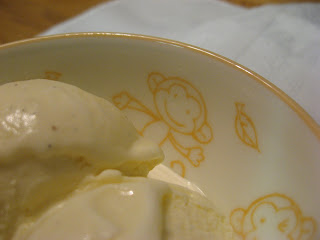 The verdict? Wow. I love the flavor of the Tahitian vanilla. The Bourbon variety is what I'm used to, and I like it, but this was really good. I can see why the Tahitian ones are described as being more floral. Absolutely delicious. All my taste-testers seemed to agree. Brianna and Gillian enjoyed eating their ice cream in their "animal bowls." Awhile back I found a couple of really cute bowls at Sur la Table. I think they're intended to be rice bowls, but they were really cute and I couldn't pass them up. As soon as I saw the monkey one, I knew I had to buy it for Gillian (who loves all things monkey). I also have a pink bunny one for Brianna. They make great dessert bowls. 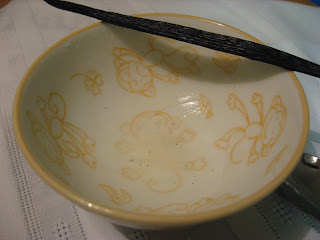