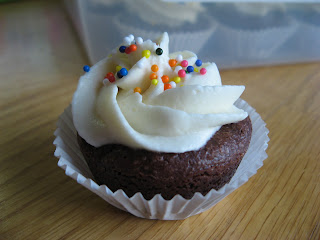 No, your eyes aren't deceiving you. There's no lime or meringue in these photos. It's Tuesday, so I should be posting the Tuesdays with Dorie recipe here. But I haven't made it yet. And if I do get to it this week, it probably won't be before the weekend. So my apologies to Linda of Tender Crumb, who picked the Creamiest Lime Cream Meringue Pie for us to make this week. I love lime, and I loved this recipe's close cousin, the Most Extraordinary French Lemon Cream Tart, so I will make it at some point.
Meanwhile, what's been stopping me from making it... First I had to work last Saturday. So I had only one weekend day for baking. I spent it getting ready for Brianna to head back to school (1st grade) on Monday. That meant bread for her lunch (coming soon) as well as cookies for her lunch and for teacher treats. Oh, and the cinnamon rolls for the BBA Challenge, also coming soon.
This is Brianna's second year at her elementary school, so besides sending cookies with her for her teacher, I also dropped some off for her kindergarten teacher. We've been very lucky to build good relationships with many of Brianna's and Gillian's teachers over time. And not just because of the baked goods. =) Gillian still goes to the daycare that Brianna used to be at, and we're very close to a lot of the teachers there. One in particular has become a good friend, and her birthday was last week. When I had asked her a while back what kind of cake she wanted, she just said "something chocolate." I didn't get to cake, but I did make a second attempt at the Brownie Buttons, and I think I've got a real winner now. 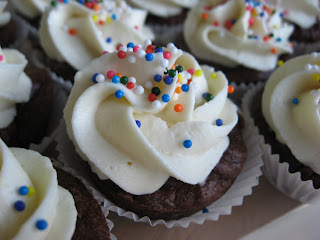 For starters, I made my favorite brownie recipe, Robert Steinberg's Fudgy Brownies from The Essence of Chocolate. The recipe was perfect for two dozen minis. I ended up baking them for 14 minutes, and they were nice and fudgy in the middle--not dry at all. After I removed the brownies from the pan and let them cool, I dressed them up with some paper wrappers. But they needed something more. Unlike the ones from Dorie's recipe, they were quite flat on top, so dipping didn't seem like a good idea. Then I realized--they needed frosting! Cream cheese frosting seemed like the perfect way to go. I piped some swirls on top, added some colorful sprinkles, and they looked quite festive. And from what I hear, they were a hit with the birthday girl. Brianna and Gillian helped me eat the extra unfrosted brownies, and we'll definitely be making these again. Soon.
You can find the brownie recipe at the link above. And here's what I used for the frosting:
Cream Cheese Frosting
(adapted from Fine Cooking)
2 ounces (4 tablespoons) unsalted butter, softened
4 ounces (1/2 package) cream cheese, softened
1 ounce (1/4 cup) powdered sugar
1 teaspoon vanilla
In a medium bowl, cream together the butter and cream cheese until light and fluffy. (I used my hand mixer.) Beat in the powdered sugar and vanilla until there are no lumps. Add a bit more sugar for a sweeter frosting. Makes enough for 15-16 minis. Increase the recipe to top a full batch of brownies. I used a 1M tip to pipe the swirls. 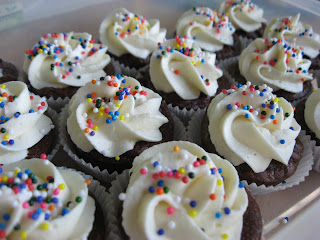