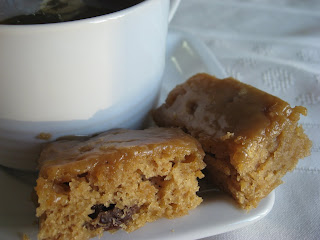 One of the things you do as a parent is worry. Am I doing this right? Am I teaching my kids the right things? It's easy to make yourself totally crazy. It seems like lately I have a harder time with it. I miss my mom being on the other end of the phone, reassuring me that I'm doing okay, that things will turn out just fine, that my sisters and I were the same way as kids. I know these things, but it's nice to have someone else tell me, too.
From day one, food is a worry. Is the baby eating enough, often enough? When should you start solid food, what to feed first? What if my child won't eat any vegetables if I give her fruit first? I realize now that I didn't know how good I had it before they could talk back to me. =) Gillian still eats most things put in front of her, but Brianna is definitely more picky. (Though I swear, lately, she must be gearing up for a growth spurt because she's been eating everything in sight.) But I also realize that I'm lucky--my girls will at least try just about anything. While Brianna and Gillian have a certain fondness for mac & cheese (Annie's from a box; they don't like my homemade) and chicken nuggets, they eat a lot of other stuff too. At two, Brianna loved pesto even more than ketchup. Of course, these days she likes to tell me that she doesn't like it at all. But she'll try things like sushi, though she doesn't like the vinegar in the rice. And we're still working on some of the veggies... =)
Brianna will even be picky about dessert at times. She doesn't like nuts except to eat out of hand (mainly pistachios and cashews). She likes fruit, but not in things. And she doesn't usually like things with spices. Chocolate anything is what she prefers. A girl after my own heart. =) And yet, Gillian is the one truly like me. Sure, she won't turn down chocolate. But she also really likes things with cinnamon and ginger and other spices. I love chocolate, but sometimes it can be a bit too much (not often, mind you!). I never get tired of what we think of as fall flavors, though. (Now if only the weather here would cooperate!) Gillian loved the cinnamon chips scones. Brianna asked me to make them with chocolate chips instead. Gillian is the one asking me to make coffeecake (with cinnamon streusel, of course). So it's no surprise that she and I really liked this week's Tuesdays with Dorie recipe. 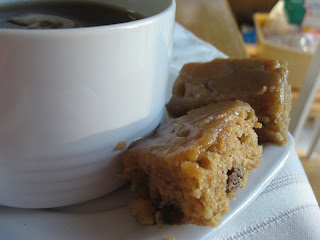 This week's selection comes from Karen of Something Sweet by Karen. In anticipation of fall (which can't get here soon enough), she picked Applesauce Spice Bars. The method reminded me of my favorite blondie recipe, but I found the result more cake-like. I actually made them early for a change, which was easy to do, since the recipe is very straightforward. I used a Golden Delicious apple, since the selection isn't very good around here this time of year (normally I'd go for a tart apple, but the only option was Granny Smith). I used a bit of Calvados for the flavoring. And in the hope that Brianna might actually the bars, I left out the nuts, though I kept the raisins (I love raisins!). The bake time wasn't that long (23 minutes for mine). While the bars cooled, I cooked up the caramel glaze, which was quite tasty right off the spoon. I let it cool slightly before spreading it on the bars, so it wouldn't run right off the sides. It didn't, but it did soak in more than I expected. 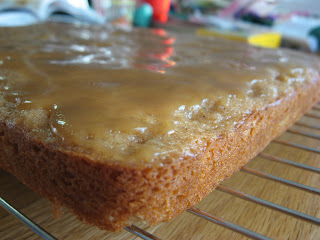 The verdict? Very tasty! But as I said, more cake-like than I was expecting. I'd like to try this one again when a better variety of apples is available, and bake it in a 9" square pan so I get something more like a snack cake. Plus then I'd have a thicker layer of glaze on top. =) I'll also add some of the Calvados to the glaze, since I couldn't taste it in the cake. Gillian was definitely a fan; Brianna not as much. Jamie enjoyed the flavors and different textures. As you can see, I enjoyed mine with tea.
For the recipe, head on over to Karen's blog. And be sure to check out what all the other TWD bakers have been up to this week! 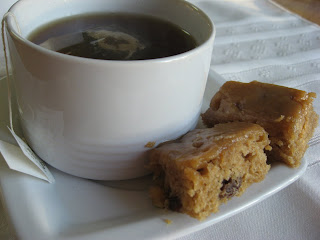