Be good to yourself 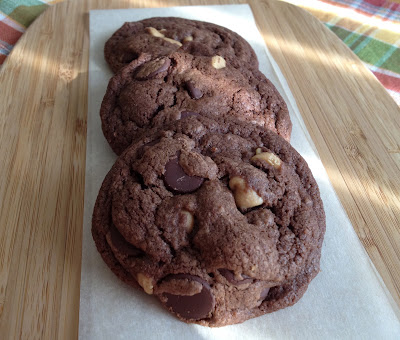 So, do any of you totally beat yourselves up after making a mistake?  I just can't seem to stop.  Logically, I know that I just need to learn from it and move on, since I can't change what's already happened.  But emotionally, I can't let it go.  I go over and over things in my head, finding all of the things that I think I should have noticed at the time.   Of course, hindsight is 20/20, and the more I think about it, the more stupid I feel. (And of course none of this is helped by the fact that I've been really, really tired due to my crazy work schedule the past couple of weeks.)

I really need to stop being such a perfectionist.  Yes, it's important to do a good job.  But the world won't end if things aren't totally perfect.  I'm that way about way too many things in my life, including baking.  I can't seem to help apologizing for everything, including things that other people wouldn't have any clue about if I didn't say anything.  I'm starting to realize that it keeps me from blogging more, too.  I worry that my pictures don't look good enough.  I worry that what I write about isn't interesting enough.

So how do you deal with this sort of stuff?  How do you get yourselves out of a funk and back to being more productive? 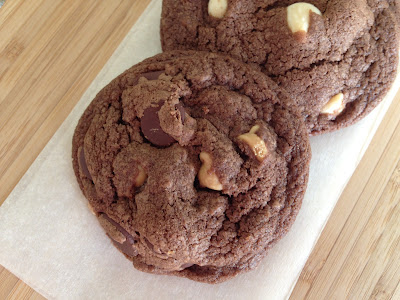 I debated whether to share these cookies.  After all, I've already blogged about the base recipe, the Cook's Illustrated Perfect Chocolate Chip Cookies.  Why would anyone be interested a relatively small change that I made?  But what the heck--I like the way they turned out, and maybe you wouldn't think to do it on your own, or wouldn't know how to go about it.  It may have seemed to me like an obvious thing to try, but not everyone thinks like me.  (Thank goodness, or we'd all be too busy worrying to ever get anything done!)

I've altered cookie doughs in the past by substituting cocoa powder for some of the flour in the recipe.  You don't want to just add cocoa, or you'll end up with dry cookies.  Cocoa has a starchy quality to it, so it can fill in for part of the flour.  I decided to swap out about half a cup.  I prefer the flavor of natural cocoa, so that's what I used.  I wanted to bring out as much of the chocolate flavor as possible, so I took a tip from some of the chocolate cake recipes I make--a number of them mix cocoa with boiling water so the flavor can "bloom."  I didn't have water in this recipe, so I whisked it into the warm browned butter before adding the sugars.  Other than that, I followed the recipe as written.  For the mix-ins, I wanted a couple different types, so I split the dough in half.  Both portions got chocolate chips, but one half also got peanut butter chips while the other got white chips.  I like chocolate and peanut butter, but Gillian recently informed me that she does NOT like the PB chips.  Plus I wanted to be able to pack some of the cookies in Brianna's school lunch (this was about a month ago), and she really shouldn't take things with peanut butter. 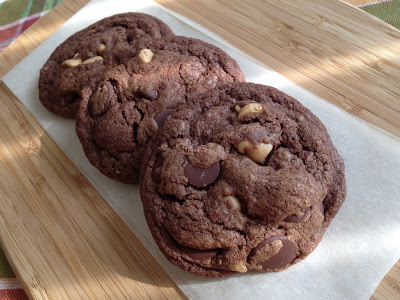 The verdict?  Well, happily, I'm doing a lot better than when I started writing this post this morning.  I got past the sick feeling in my stomach and got mad at the situation, instead of just at myself.  And the cookies?  They were much appreciated both at home and at work.  I'll definitely be making this chocolate version again.  If you'd like to give it a try for yourself, here's the ingredient list I used.