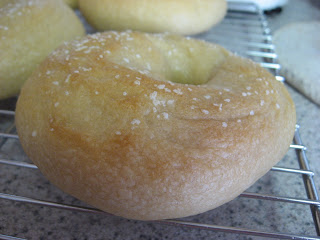 We love bagels around here.  I've been eating them (frequently, if possible) since I was a kid.  I grew up in the northeast--Pennsylvania, mostly--but both my parents are from New York.  So you know they taught us what good bagels are.  =)  (And for the record, my mom preferred bialys.)  I've bought bagels everywhere I've lived, and some have been better than others.  Here in Texas it's pretty hard to find good ones.  Even from bagels shops, most of the bagels you get just seem like bagel-shaped bread.  And the grocery store ones generally aren't even worth trying.  So it's probably no surprise that one of the first things I challenged myself to make after starting this blog was bagels.
My initial attempt was the Daring Bakers recipe from June 2007.  (A great pick from Jenny.)  I couldn't believe it--I actually made bagels!  And they were good! =)  Since then, I've made that same recipe quite a few times, tweaking it to my liking.  I've tried various toppings, made cinnamon raisin bagels, and even made minis.  I've tried the bagel dough in Artisan Bread in Five Minutes a Day, too.  They were okay, but hard to shape because the dough is very wet.  I actually like that dough better just made into a regular loaf. =)  I've thought about making the bagels in Desserts by the Yard or The Bread Baker's Apprentice, but was put off by the overnight retard. 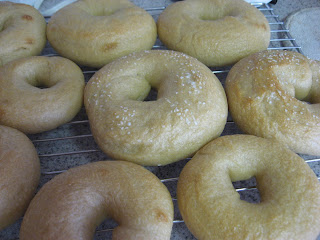 Well, one of my big reasons for joining the BBA Challenge was to make bread recipes that I probably wouldn't otherwise.  In the case of the bagels, who knows when I might have finally gotten around to trying a different recipe.  My first attempt at this one was about three weeks ago.  The first hurdle was ingredients.  The recipe calls for high gluten flour and malt powder or syrup.  I didn't have any luck finding HG flour locally and didn't want to order any right now, so I went with regular King Arthur bread flour.  I was actually successful finding malt syrup at Central Market.
Mixing the dough was straightforward.  I did let my sponge go too long, though.  I got sidetracked doing other stuff and it probably sat on the counter 3 to 4 hours instead of 2.  But at that point it was late and I wasn't about to start over, so I used it.  I put the sponge and the rest of the ingredients in my stand mixer to get things started.  It quickly became apparent that the dough was very stiff, so I figured I should finish the kneading by hand.  Once the dough was kneaded, I moved on to shaping.  I wanted both big and small sizes, since Brianna and Gillian like little bagels.  I ended up with 8 four-ounce ones and 9 two-ounce ones.  In the past, I've usually made my bagels by forming ropes and joining the ends.  For this batch, though, I went with the punch-a-hole-in-the-middle method.  Once the bagels were all formed, I put them on my parchment-lined pans to rise a bit.  But again, it was late, and I lost track of time and let them go too long.  Not much I could do, so into the fridge they went.  That was fun--trying to figure out how to fit two half-sheet pans into my fridge...
The next morning, I put a big pot of water on.  Once it was boiling, I added baking soda.  That's something I haven't tried before--my usual recipe uses brown sugar in the water.  For the little bagels, I boiled them a minute on each side.  For the big ones, I did 90 seconds on the first side, then a minute on the second.  After the first batch of bagels was boiled, I put them back on the pan and put them in the oven.  (I topped a couple with kosher salt and left the rest plain.)  I baked them for 5 minutes, then rotated the pan and turned the oven down as directed.  I then ended up baking them for 8 minutes longer (not just 5).  I was tempted to leave them in a bit longer so they'd get more brown, but took them out anyway.  Then I boiled and baked the second batch.  By that time, the first ones were cool enough to eat. 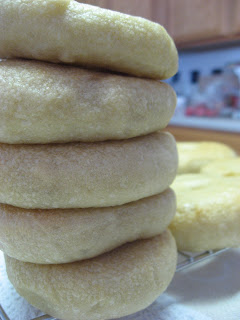 Some of the minis from the flat first batch
The verdict?  I can't believe I waited this long to try this recipe.  I really loved the taste and texture, and can't wait to play around with other flavors.  Everyone else loved them, too.  Except for trying to fit the pans into my fridge, the process worked really well, too.  The only thing I was unhappy with was that my bagels ended up kind of flat.  I figure there were a number of reasons for that--letting the sponge go too long, over-proofing before the retard, the shaping method...  I wasn't sure what the exact cause was, but I decided that I had to try again. =) 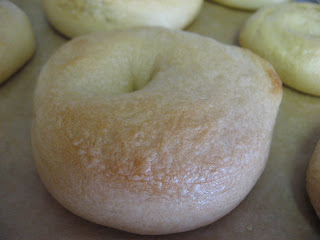 The following weekend, I made them again with a few changes.  I added some vital wheat gluten to my bread flour (1/2 teaspoon per cup of flour).  I did the whole process by hand--that was quite the workout!  I watched the timing much more carefully.  And I went back to my tried-and-true method of making ropes of dough and sticking the ends together.  Something worked, and my bagels were much more rounded the second time.  And still delicious!
For the recipe, get yourself a copy of the book!  And to check out everyone else's bagels, check out the BBA Challenge blogroll.  Next up, brioche! 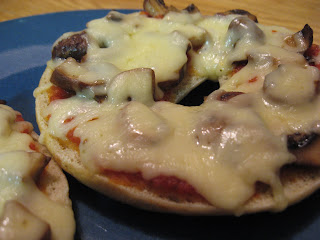