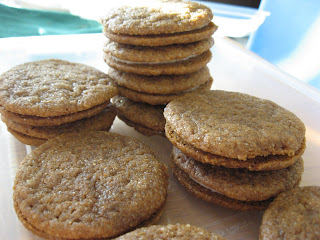 It's been a while since I've participated in Magazine Mondays.  This is probably my least favorite time of year for cooking magazines.  I don't grill much, and my passion is baking (though I do cook as well).  As a result, a lot of the recipes that are out there in magazines during the summer don't hold that much appeal for me.  Oh, there are some I like, but it's not like the baking bonanza you see during the fall and winter. =)  But I still read the magazines, and one or two things will really jump off the page at me.
This particular recipe is one of them.  As I was paging through the June/July issue of Fine Cooking, I ran across a picnic article.  The dessert was Ginger-Spice Sandwich Cookies with Lemon Cream.  I love ginger in cookies.  And the idea of lemon cream was intriguing.  All I needed was a good reason to make them.  I finally came up with one a couple weeks ago. 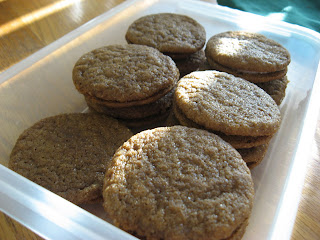 With the end of school looming, I had a bunch of baking to do.  I made dozens of mini cupcakes for Brianna's end of year class party, for instance.  But I also wanted to make a small gift for her kindergarten teacher as well as something for the after-school care staff.  These cookies seemed perfect.  The dough was easy to mix up, and included ginger, cinnamon and cardamom.  In my haste to get them made, I didn't actually chill the dough before shaping it into balls, but it seemed to work out okay.  I only made the one sheet of cookies I needed right away, and chilled the rest of the dough for later.  I portioned the dough with my handy #70 disher.  Rather than rolling the dough balls in regular sugar, I used turbinado sugar.  I baked the cookies for about 12 minutes, then let them rest on the pan for a few minutes before transferring them to a rack to cool.  While the cookies cooled, I mixed up the filling.  It was pretty simple--powdered sugar, cream cheese and lemon zest.  I matched cookies together as well as I could by size and sandwiched them together.  My #100 disher was perfect for the filling. 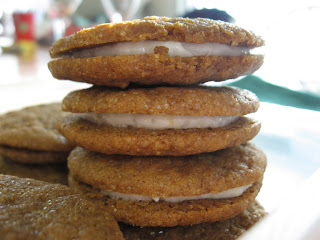 The verdict?  I don't actually know how the teachers liked them, since it was the last day of school.  When I finally had a chance to try one, I was a bit surprised at how soft the cookie part was.  But I liked the lemon and ginger together.  Jamie's reaction was pretty much the same as mine.  A few days later, I finally had the chance to bake the rest of the dough, so I took some cookies to work, too.  They seemed to be well received.  I can seem myself making these again, maybe playing around with the filling a bit.
If you're a subscriber to the Fine Cooking website, you can find the recipe here.  Or pick up a copy of the magazine, since it should still be available.  Extra incentive--there's a great ice cream article by David Lebovitz as well.  And be sure to check out the other Magazine Monday contributions on Ivonne's blog. 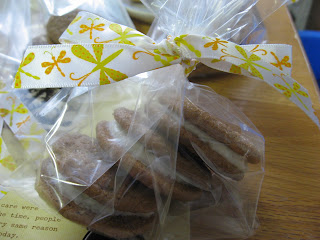