If it's Tuesday, it must be Dorie 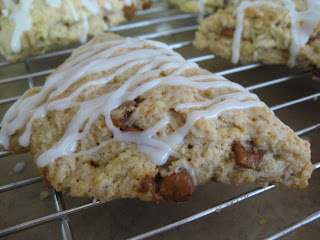 I posted the other day on Twitter about how I was going to miss out on this week's Tuesdays with Dorie recipe due to some personal stuff going on. One of the hazards of Twitter is all the abbreviating you have to do to fit what you want to say into 140 characters. I mentioned that things were going to be crazy because "J" was having tonsils removed. It's a reasonable assumption to think that "J" is one of my kids. In fact, it's Jamie, my 38-year-old husband. Yes, who had his tonsils removed on Monday. I'm happy to say that he's doing pretty well, all things considered. I'm sure the liquid Vicodin is contributing immensely to that... =)
With everything going on, I don't have a dacquoise for you to see today. I thought about trying to make it, but Jamie wouldn't be able to help me eat it. And he's the real white chocolate fan in the house. (Plus I'd have to leave the coconut out--no one here will eat that.) Hopefully I'll try it sometime in the future. Instead, I thought I'd share my take on another Dorie recipe with you. 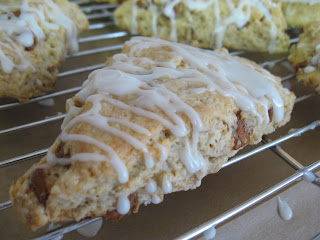 I've made the Oatmeal Nutmeg Scones from BFMHTY several times. The first time, I made them according to the recipe. I've also made some variations--adding cinnamon and raisins one time, butterscotch chips another. They're always good. Recently, I read some blog posts that mentioned cinnamon chips, and the next time I went grocery shopping, some just happened to end up in my cart. =) I've been looking for a good excuse to use them, and it occurred to me that they would be great in the oatmeal scones. I even remembered to buy some buttermilk!
The scones are easy to mix up. You start by mixing an egg with the buttermilk. Then you mix the dry ingredients together. It helps if you have enough of them, though. The day I wanted to make these, I discovered that I only had a cup of oats (the original recipe calls for 1 1/3 cups). So I decided to make up the other 1/3 cup with white whole wheat flour. Once the butter was rubbed into the dry ingredients, I added 2/3 cup cinnamon chips before adding the wet ingredients. I also cut the dough into smaller wedges (8 instead of 6 from each portion of dough). As a final addition, I drizzled some glaze on the scones when they came out of the oven (similar to the cinnamon chip scones you can get at Starbucks). 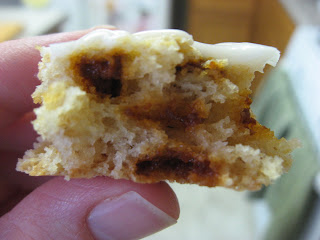 The verdict? They were awesome! I actually made them a second time this morning, since I liked them so much. This time, I used more white whole wheat flour in place of some of the all-purpose flour, and they were still fantastic. Gillian was a huge fan as well. Brianna would rather have chocolate chips in hers. =) I took some of the first batch to work, and they disappeared pretty quickly. Part of the second batch is headed for the day care this afternoon, so I don't eat them all myself. =) (And for the record, they're much better than Starbucks.)
My apologies to Andrea of Andrea in the Kitchen for missing out on her TWD pick. If you want to try this week's Coconut-Roasted Pineapple Dacquoise, be sure to head over to her blog for the recipe. And check out the TWD blogroll to see how everyone else did this week.
Cinnamon Chip Oatmeal Scones
(adapted from Baking From My Home to Yours)
1 large egg
1/2 cup (4 ounces) cold buttermilk
1 cup (4.5 ounces) unbleached all-purpose flour
1 cup (4.5 ounces) white whole wheat flour
1 cup (3.25 ounces) old-fashioned oats
1/3 cup (2.25 ounces) sugar
1 tablespoon baking powder
1/2 teaspoon baking soda
1/2 teaspoon table salt
10 tablespoons cold unsalted butter, cut into 1/2" cubes
2/3 cup cinnamon chips
3/4 cup (3 ounces) confectioner's sugar
1-2 teaspoons milk
1/4 teaspoon vanilla
Preheat the oven to 400 degrees F. Line a baking sheet with parchment paper.
Whisk the egg and buttermilk together in a small bowl or liquid measuring cup.
Stir together the flours, oats, sugar, baking powder, baking soda, and salt. Add the butter, and use your fingers to rub it into the dry ingredients until the mixture is pebbly (there should be butter in different sized pieces when you are done). Stir in the cinnamon chips. Pour the egg/buttermilk mixture over the dry ingredients and stir with a rubber spatula until the dough comes together. It will be wet and sticky. Don't over mix.
Use the spatula to turn the dough 8 to 10 times to bring it together. Turn the dough out onto a lightly floured counter and divide it in half. Pat each portion of the dough into a rough circle that's about 6 inches in diameter. Using a bench scraper, cut each circle into 8 wedges and gently transfer them to the prepared sheet pan.
Bake the scones for about 20 minutes, until their tops are golden and firmish. Let the scones cool for about 5 minutes on the sheet pan, then transfer them to a rack. In a small bowl, whisk together the powdered sugar, vanilla, and enough milk to make a thick glaze. Take the parchment paper from the sheet pan and place it under the rack to catch drips, then drizzle the glaze over the scones. Let the scones cool until they are just warm and the glaze is set. 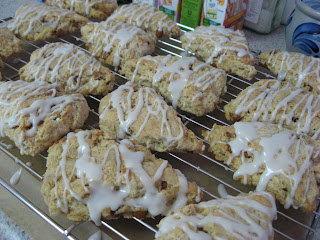