A little help from my friends 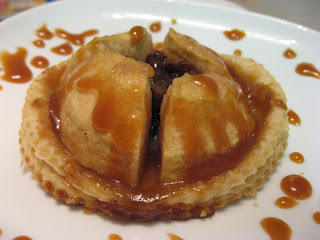 In my almost year and a half of blogging, I've joined several groups (TWD, DB, BBA) expecting to expand my baking horizons.  I figured I'd learn new techniques as well as try recipes that I might otherwise skip.  I definitely have.  And this baking blog has evolved a bit to where I don't just write about my baking experiments.  I've realized that I enjoy writing about what's going on in my life (especially with my kids) as well.  What I didn't expect was that in the process I would make so many great friends.  A while back, someone said something to me about how I was writing here for strangers to read.  But many of the people who read my blog aren't strangers anymore.
We may not have met each other in person, but we've gotten to know each other quite well.  First someone invited me to join Facebook, and that's been fun.  It's allowed me interact more with a lot of people (college friends, family), not just other food bloggers.  Then more recently, I joined Twitter.  And I have to say, so far it's been a blast.  It's like baking along with a whole bunch of friends.  All you have to do is throw out a question ("What size pan would be best if I double this recipe?" or "So where exactly did you find that fresh yeast?"), and before you know it, someone is there with an answer.  It's so neat to hear the experiences that others have as they're baking through the same recipes.
This week's Tuesdays with Dorie recipe is a good example.  Jessica of My Baking Heart picked Parisian Apple Tartlets for us to make.  In reading through the recipe, this looked like one of the easiest TWD recipes yet.  You cut half an apple into quarters, place it on a circle of puff pastry, and sprinkle it with brown sugar and a bit of butter.  Then you bake it at 400 degrees F for about 25 minutes, and voila!--apple tartlet.  But of course I couldn't do it the easy way...
In reading this week's P&Q, a number of people said they were making their own puff pastry.  And that got me thinking.  At the beginning of the year, I was thinking about some of the things I wanted to make this year.  Puff pastry was on the list.  So I figured this was as good a time as any to try it, since the rest of the recipe was simple.  I remembered recently seeing it on Wendy's blog.  When I mentioned it on Twitter, Wendy was quick to say that it wasn't that bad to make.  Plus it gave me the chance to try a recipe from my new cookbook, The Art and Soul of Baking.
I made the puff pastry on Sunday, at the same time that I was making coffeecake from brioche dough (post coming soon).  Wow, I went through a lot of butter this weekend!  I figured that if I was going to spend the time making puff pastry, I might as well make the full recipe.  It made over two pounds of dough.  I actually did four turns instead of three, and the dough really started to look good on the last one, so I'm glad I did it.  I chilled the dough for about 24 hours, since I didn't have a chance to bake my tartlets until Monday afternoon.  I divided the dough into four pieces (about 9 oz each) and immediately stashed two in the freezer for later. (Still debating what to do with the extra piece in the fridge--may also go to the freezer for now.) 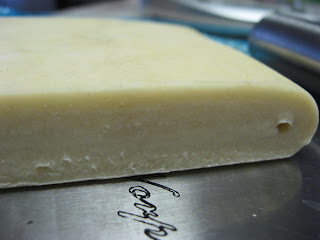 To make the tartlets, I rolled out one of the pieces of dough to about 1/8 inch thick--it may have been a bit thicker, but it was close.  Then I hunted around in my cabinet for something that was about 4 inches in diameter to use for a template.  I ended up with the lid to a sour cream container. =)  I traced around it with my fluted pastry wheel to cut out four circles.  Next was the choice of fruit--apple or peach?  I put out another query on Twitter.  Turns out that Nancy tried these with a variety of fruit, but like the apple the best.  So I decided to go with apple.  I peeled and cut up my apples and placed them on the dough circles (on a parchment-lined pan).  They looked funny--there was a big hole in the middle from where I'd removed the apple cores.  Oh, well.  I continued on, adding some brown sugar and butter and popped them in the oven.
Twenty minutes later I checked on the tartlets.  Okay, that's a lie.  I probably turned on the oven light and peeked at them through the oven window half a dozen times in the first ten minutes, watching like a little kid to see if the pastry was puffing. =)  Fortunately it was.  Not a lot, but I expected that, since I used the fluted cutter rather than a straight knife (which compresses the layers a bit at the edge, making it harder for them to separate and puff).  But when I took them out for a closer look at twenty minutes, they definitely weren't done.  More tweeting ensued, since Tania was baking her tartlets at the same time I was.  I decided that the holes in the middle of the apples were bothering me too much, so I filled them with raisins and put the tartlets back in.  After a total of 45 minutes of baking, I finally pulled them out because I had to go pick the girls up from daycare.
When I got back, I looked at the little tarts again.  They definitely looked kind of sad, nothing like the pretty picture in the book.  Tania suggested they needed caramel sauce or something, which sounded good to me.  That's a sure sign of how far I've come in the past year and a half.  I thought nothing of whipping up a quick batch of salted caramel sauce (starting from white sugar and water) while making dinner.  And it definitely made my tarts much nicer looking. =) 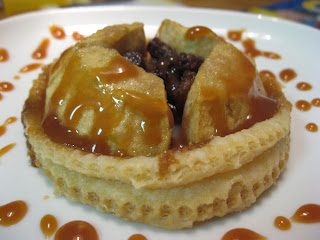 The verdict?  The apples definitely weren't cooked all the way through.  I seem to have this problem a lot with Dorie's recipes (often when I substitute apples for another fruit).  I think I need to try a different kind of apple or something.  But they still tasted good, especially with the caramel.  The pastry was fantastic.  I split one of the tartlets for the girls to try.  Gillian ate everything but the apples.  Brianna just ate the raisins out of the middle of hers.  Jamie and I split another one, eating the whole thing. =)  I still have lots of pastry dough left, so I think I may have to try these again with different fruit.
Be sure to head over to Jessica's blog to see some really lovely tartlets.  And of course check out the blogroll at Tuesdays with Dorie to see what everyone else did this week. 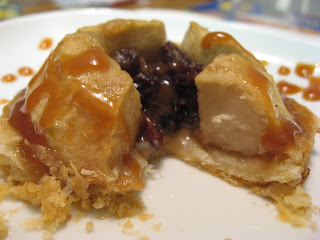