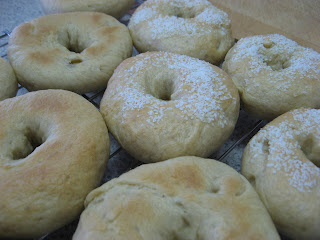 We're a brown-bag lunch sort of family. Okay, technically mine and Jamie's are blue, and Brianna's is pink. =) I've pretty much always taken my lunch to school or work, since I was little. Early on, my mom would make my lunch. That apparently lasted until I started to complain about what was in it (I don't like PB&J sandwiches), at which point I was told that if I didn't like it I could do it myself. =) Nowadays I take lunch to work most of the time because I know I'll like what I have, and it definitely saves money.
It was a bit of a shock this past fall when I realized that I would need to do something for Brianna's lunch when she started kindergarten. Up until that point, she got fed at day care (as Gillian still does). I had a feeling she wouldn't be that interested in buying lunch at school--she can be kind of picky. I asked her, and she wanted to bring lunch from home. And she has, every day but one so far--when I went and ate Thanksgiving lunch with her at school. (Mmm, cafeteria turkey and mashed potatoes. =) ) 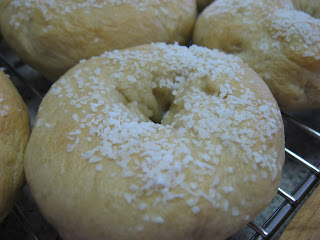 Brianna's lunch is usually a mix of different small things to eat, since I'm never sure how hungry she's going to be at lunch time. Today's, for example, included: a small yogurt drink, a small juicebox, a handful of blackberries, a small bag of Cheezits (probably for afternoon snack), and a little bagel with garlic cream cheese. The fruit varies (applesauce, blueberries, grapes, even cherry tomatoes). The snack varies (pretzels, goldfish). And the bready bit varies. Sometimes it's an actual sandwich. Sometimes it's bread with the meat and cheese on the side. Sometimes it's a wrap (tortilla in place of bread). This weekend, though, Brianna asked if she could have bagels in her lunch this week. 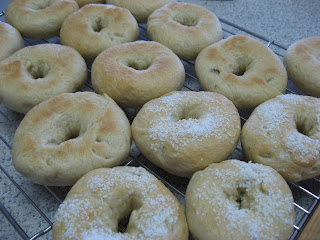 In the past, I've bought mini bagels at the grocery store. They're convenient and not that expensive. But frankly, they have about as much taste as cardboard. So in keeping with my BYOB goal, I decided to make my own mini bagels this past weekend. I've made big ones before, so I just had to adjust my shaping and timing a bit. I thought about trying a recipe that I saw on Baker's Banter, but I'm used to boiling rather than steaming the bagels before baking them. I'm sure I'll try their method eventually.   I usually form my bagels by making ropes of dough and joining the ends. But this time I tried the poke a hole in the middle approach shown in the article. It worked quite well with the smaller (about 2-ounce) pieces of dough. After shaping, I boiled the bagels for about 90 seconds on each side. I topped a handful of them with salt and left the rest plain--the salt ones need to be eaten right away or the salt dissolves and makes the bagels soggy on top. I baked them for about 5 minutes less than I do the big ones.
The verdict? Quite tasty, as expected. These are the perfect size for Brianna and Gillian. We ate some for breakfast on Sunday. I sliced the rest in half and put them in the freezer for B's lunches. Every day so far this week, she's actually eaten everything in her lunch. =) 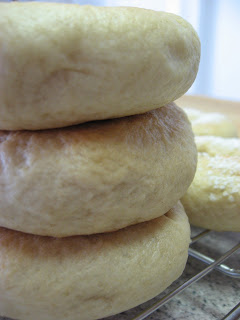 toppings, if desired
Place the flours, salt, sugar and yeast in the bowl of a standing mixer.  Mix with the paddle on low speed until the dry ingredients are well blended.  Add the water and continue to mix with the paddle until a shaggy ball of dough forms.  Switch to the dough hook.  Knead the dough on low speed (between 2 and 4) about 7 minutes.  The dough will be much smoother, but will still be tacky.  Transfer the dough to a rising container that has been greased with canola oil.  Let the dough rise at room temperature until doubled in size (about 1 1/2 hours, I think).
Preheat the oven to 400 degrees F.  Place the two quarts of water in a wide pot and bring it to a boil.  When it boils, add the brown sugar and turn the heat down so the water just simmers.
Meanwhile, remove the dough from the container and portion it into 15 equal pieces (2 ounces by weight).  Form each piece of dough into a smooth ball (like you're making rolls) and allow it to rest for a few minutes.  Poke a hole in the center of each dough ball with your finger and thumb and then twirl the bagel on your finger to widen the hole.  (see great pictures here--just scroll down)
Add the bagels to the water 3 or 4 at a time.  Simmer them for 90 seconds on each side, then remove them from the water and place them on a clean lint-free kitchen towel to drain.  After a few minutes, transfer them to a large baking sheet (13 x 18) lined with parchment paper.  Once all the bagels are on the baking sheet, place the pan in the oven (I usually put it directly on top of my baking stone).  Bake for about 20 minutes, then flip the bagels over and bake for about 5 minutes longer so that both sides brown well.  Let cool until just warm before slicing. 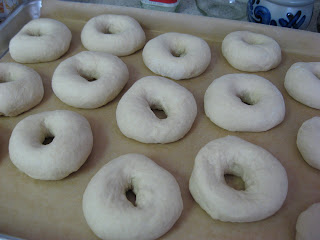