Not in a box, not with a fox 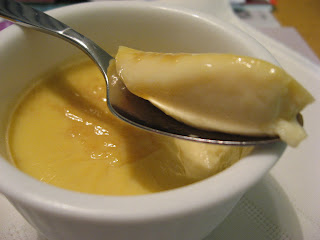 My mom used to tell me that when I was little, I really loved to eat eggs, and she couldn't understand why that changed.  But it definitely did.  Every so often, I'll try scrambling an egg to see if I've changed my mind.  I haven't so far.  And scrambled is the only way I'll even try them.  No omelets.  No fried, poached, or hard-cooked eggs.  The taste, the texture--I do not like them, Sam I Am.
Now, if you beat them with some milk and dip bread in them, I'm there.  Or if you use them to make cakes.  Or ice cream.  Or cheesecake.  Or buttercream.  Or angel food cake.  This week I realized that I really like the parts better than the whole eggs.  Or, as long as you can't really identify them as eggs, I like them just fine. =)  Unfortunately, that didn't bode well for this week's Tuesdays with Dorie recipe.
This week's selection was made by Bridget of The Way the Cookie Crumbles.  She chose Lemon Cup Custard.  I like lemon just fine.  But cup custard is another story.  It tastes like eggs.  And I can't get past the texture.  It was when I was trying to figure out why I like crème anglaise (or ice cream custard) but not baked custard that I hit on my theory about only liking the parts of eggs.  At first I thought I just didn't like egg whites, but then I realized that I do like them as long as they're whipped with sugar. =)  So it seems to be something about whole eggs that aren't completely disguised inside something else that I don't like. 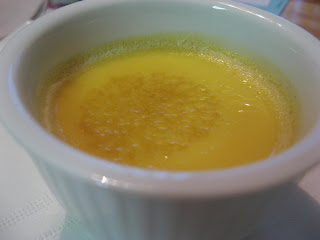 No disguises with this recipe.  I actually went with the vanilla variation, which consists of milk, eggs, sugar and vanilla.  I added a pinch of salt.  I accidentally put the sugar in the saucepan with the milk instead of beating it with the eggs.  But I've made ice cream custard both ways without any problems, so I just went ahead and tempered the eggs with the milk/sugar mixture.  I only made half the recipe, which was enough for 3 dishes.  I baked them in their water bath for 45 minutes, at which point they were set but jiggled a bit in the middle.  After letting the custards cool to room temperature, I refrigerated them until cold.
The verdict?  I only made this because I knew my husband Jamie would really enjoy it--and he did.  =)  I did try a small bit, which confirmed that I still don't like baked custard.  Brianna tried some.  At first she claimed to like it, but then said that it tasted like scrambled eggs and wouldn't eat any more.  (Guess she gets that from me...)  Gillian didn't actually get to try any, but she doesn't really like eggs either.
I might make this again if Jamie wants to have it again or try another flavor.  It was easy, and has a simple ingredient list of things we always have.  If you like eggs and want to give it a try, head over to Bridget's blog.  And since I only got a couple pictures of this week's recipe, here's a picture of my not-quite-big-enough-yet sous chef (Gillian), borrowing her big sister's gear.  (Shhh, don't tell Brianna...) 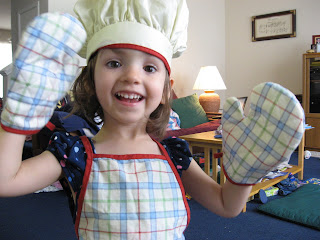 Edited to add...  For someone who claims to not like eggs, I go through an awful lot of them.  I save the cartons to take to the daycare for projects.  Right now I have 18 empty cartons that I've collected over the past six months or so (based on the dates on them).  Wow.
Posted by Di at 12:01 AM