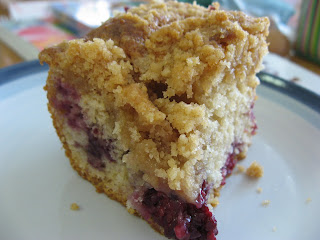 It's hard to believe it's spring already.  The days on the calendar seem to be going way too quickly.  As far as the weather, well, it's felt like spring for a while around here in central Texas.  Most of the people I talk to are quite happy that it's getting warm.  Personally, I think March is too early for it to be in the high 80s like we had a week or two ago.  Right now it's a more temperate 66 degrees, and it's actually overcast and drizzly.  We need more days like this (and not just because we're in a drought).  It's a great day to be off from work and here at home, drinking tea and reading and baking and generally being lazy.  Of course there are things I should be doing (aren't there always?).  Maybe this afternoon. 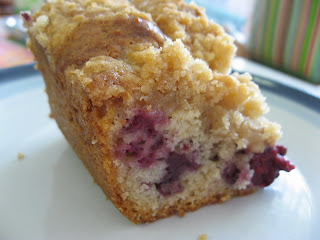 First, though, I need to writing about this week's Tuesdays with Dorie recipe.  For this week, we have Blueberry Crumb Cake, chosen by Sihan of Walking in the Rain.  I mentioned last week that I've been craving coffeecake.  So I was happy to make one two weekends in a row.
I obviously was so happy with the yogurt in last week's cake that I just had to use it again this week.  Or maybe I forgot to read the recipe thoroughly before grocery shopping and didn't buy buttermilk... =)  And then there's the fact that I don't like blueberries.  Every so often I'll try them again, but I still don't like them.  I really wanted to try cranberries instead, since I knew I had some in the freezer.  Except I didn't.  Apparently I should check to see what ingredients I have on hand before shopping in addition to reading the recipe. =)  Fortunately, I did have a bunch of blackberries--Brianna likes them in her lunch and they were on sale this week, so Jamie suggested I should get extra.  Next, I thought that lime zest would be good with the blackberries, since I've seen a number of delicious-looking recipes that use that combo.  Yep, you guessed it--no limes in the produce drawer.  (Again, could have sworn I had some...)  But I did have lemons.  And for one final change, I left the nuts out of the topping.  That one was on purpose, since Brianna doesn't like nuts in her baked goods and I didn't want to hear any complaints from her about the cake.
Since Dorie mentioned in the recipe that a Pyrex pan would work well, that's what I went with.  I coated it with baking spray.  I mixed together the crumb ingredients in the small bowl of my food processor and put the crumbs in the fridge to chill.  Then I mixed up the batter (pretty straightforward creaming method).  The batter was quite thick, and I had a hard time folding the blackberries in evenly.  Once I got that done, I spread the batter in the pan, put the crumbs on top (sans nuts) and popped the cake in the oven.  I ended up baking it for 50 minutes (the recipe suggests 55-60) at 350 degrees F, at which point the middle seemed done.  We let it cool in the pan for a bit, then dug in. 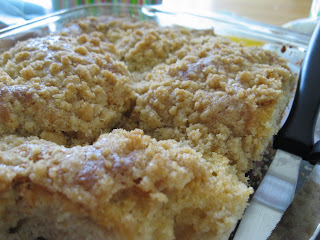 The verdict?  Mixed.  It seemed rather dry to me.  I think I should have added more fruit.  I didn't really measure, but the blackberries were pretty big and there just didn't seem to be enough of them in the cake.  I think I should have cut them in half or just added more.  And even though I've heard that you should lower the baking temperature when using Pyrex pans, I didn't, since Dorie said that sort of pan would work well.  The taste of the cake was pretty good, but I liked last week's better.  The one part I really did like was the topping.  It was crisp and browned and buttery.  I can see myself using it on another coffeecake or on muffins.  But I think I'd adjust the quantity.  My cake rose a lot, and it seemed like there was way more cake than topping.  I'm definitely in the as-much-crumbs-as-cake camp. =)  Everyone else around here thought the cake was okay.  Brianna ate all of hers.  Jamie agreed that it was a bit dry.  Gillian picked the topping off and pulled the blackberries out and ate both of those, leaving most of the remaining cake on the plate.  Girl after my own heart... =)
If you'd like to try this for yourself, head over to Sihan's blog for the recipe.  And check out the creations of the other TWD bakers over at Tuesdays with Dorie.  And one last thing...  It only seems fair to share a picture of Brianna this week, since we had chef Gillian a couple weeks ago.  Last week was Spring Break, and they had facepainting one day at day care. 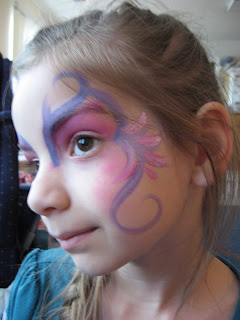