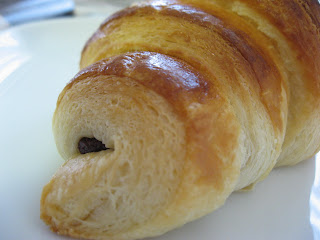 As I was reviewing last year, I was also thinking about things that I wanted to try in 2009.  I try to fit in as much baking as I can during the week and on weekends, but sometimes it's hard.  In fact, in October, I barely managed to  make my Tuesdays with Dorie and Daring Bakers recipes.  So it's always nice when I know I'm going to be on vacation, since it gives me a chance to try some new stuff.  In fact, I started my notebook (the one this blog is named after) during a week of vacation in May 2005.  Well, everything came together nicely, and over the past several days I've finally had a chance to make something that I've wanted to for quite a while. 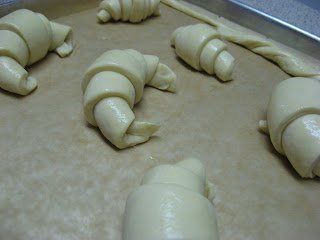 When I got my February/March issue of Fine Cooking, one article immediately caught my eye.  It was Croissants.  Laminated dough really used to scare me, until the June 2008 DB challenge when we made Danish Braids.  Even though I discovered then that it wasn't as hard as I thought, I still never got around to making anything else.  And then lately, I've been seeing croissants everywhere. 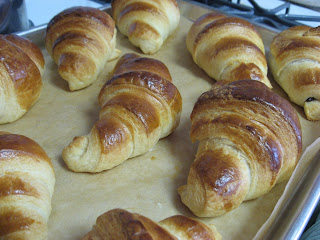 I still managed to get a later start than I wanted, but it worked out okay.  The timeline in the Fine Cooking article has things spread out over three days.  On Friday, I mixed up the dough that would be wrapped around the butter.  It went into the fridge to develop flavor overnight.  Saturday morning, while Brianna and Gillian were occupying with cartoons and playing, I laminated the dough.  The recipe calls for three turns, but I actually did four.  The third one was particularly difficult for some reason--the dough really seemed to resist being rolled out.  So I waited a bit longer to do the last one, and it went better.  Once I was done, I wrapped everything up and stowed it back in the fridge until Sunday morning. 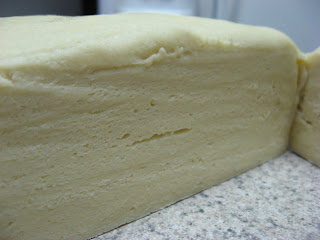 I was pretty surprised when I took the dough back out on Sunday, since it had risen quite a bit.  I cut it in half and carefully wrapped one half and put in in the freezer for later.  Then I rolled out the other half of the dough.  The dough rolled out nicely, which was really good, considering how sore my upper back was from Saturday's workout.  (It still hurts...)  I cut it as directed, ending up with 7 large triangles of dough and 2 small ones.  Most I rolled up as plain croissants, but I also wanted to make some chocolate filled ones. 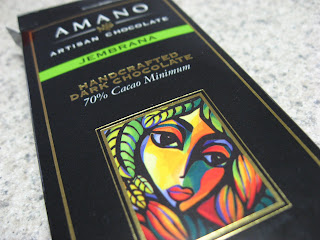 Now I usually have plenty of chocolate on hand.  But I thought this would be the perfect opportunity to sample something new that I received recently.  At the end of December, I was lucky enough to qualify for a giveaway over at Blake Makes.  And a week or so ago I came home to find a small box containing my bar of Amano chocolate.  I saved a few squares to sample straight, and broke the rest into bars to put on three of my triangles of dough. 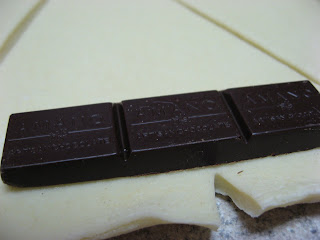 After letting the formed croissants rise for a couple hours, I baked them for a little less than 20 minutes.  The whole house smelled amazing.  The hardest part by far was waiting for them to cool long enough to avoid burning my tongue on molten chocolate. 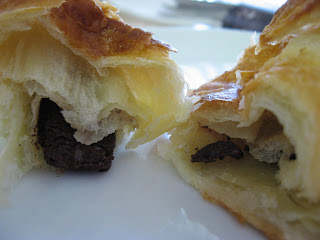 The verdict?  Oh, it was totally worth all the work.  The croissants tasted amazing!  It's good that I froze part of the dough.  It's bad enough that I made as many as I did, since I don't think they'll last very long.  I ate one of the chocolate ones for brunch (definitely too late to be called breakfast) and used another for my sandwich at lunch.  Gillian ate one of the small ones and really enjoyed it.  Brianna ate the middle out of hers and complained that she didn't like the crispy outside.  Crazy, I know.  But typical... =) 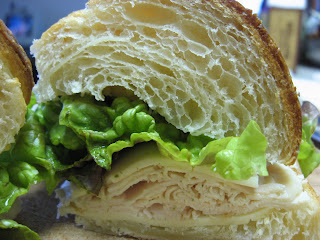 I'm posting this as part of Magazine Mondays, and also submitting it to Yeastspotting.  If you're looking for a workout and want to give these croissants a try, you can find the recipe here. (It appears to be free for everyone at the moment.) 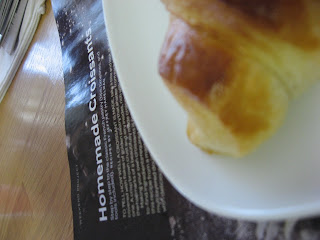