Daring to wait 'til the last minute 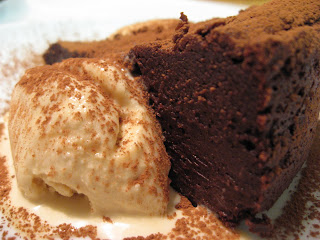 This month marks the completion of my first year as a Daring Baker.  I'm happy to say that I've managed to make all but one challenge recipe so far.  And I was really excited when this month's challenge was revealed.  A flourless chocolate cake.  It's been a very long time since I've made one (more than ten years), and that one didn't turn out all that well.  My baking skills were quite good back then, but have improved so much in the past year as I've tackled recipes for the different baking groups that I belong to.  However, despite all my experience, I still manage to leave things to the last minute...  Like this month, when I ended up making the recipe on the actual posting day.  (In my defense, I lost most of the past week due to tending a sick child...) 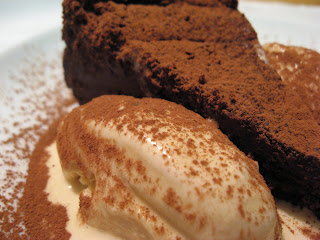 Fortunately, it doesn't get much simpler than the ingredient list for this cake--chocolate, butter and eggs.  A pound of chocolate, 10 tablespoons of butter, and 5 eggs.  So no, this is not a low-fat dessert. =)  I went with my usual brand of baking chocolate, El Rey, but chose a percentage that I don't often use.  I was afraid that the 58.5% Bucare would be a bit too sweet, but didn't want to go with the bittersweet 70% Gran Saman.  So I decided on the 61% Mijao.  Since the recipe calls for the chocolate to be coarsely chopped, I actually didn't chop it at all.  I usually buy the chocolate in discos, so I just broke them into smaller pieces.  I really dislike chopping chocolate--I hate how the finer bits end up everywhere, including melting all over my hands. 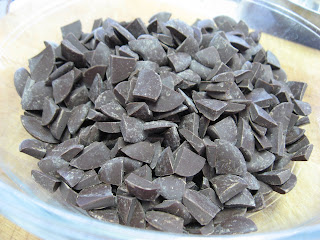 The cake batter is actually pretty straightforward to put together.  I started by lining the bottom of my 8-inch springform pan with non-stick foil to make it easy to remove the finished cake.  The chocolate and butter get melted together.  The eggs are separated and the yolks are whisked into the chocolate and butter.  The whites are beaten until stiff peaks form and then they are gently but thoroughly folded into the chocolate mixture.  The finished batter is poured into the pan and then placed in the oven for about 25 minutes at 375 degrees F.
The recipe says that the cake will be done when the temperature registers 140 degrees F in the center.  Mine did after the 25 minutes was up, so I took it out of the oven and place it on a rack to cool for 10 minutes.  Then I removed the outside ring of the springform pan and inverted the cake onto a rack.  It seemed soft in the middle, but I didn't think that much of it until a few minutes later when I heard something plop onto the counter.  The middle of my cake was oozing out all over the place!  I quickly inverted the cake again onto a platter and tried to salvage what I could of the part that had leaked out.  I then promptly put the cake in the fridge, hoping it would firm up as it cooled.  Fortunately, it did. =)
While the cake was cooling, I worked on the ice cream to accompany it.  I've made ice cream quite often in the past, so I wasn't too concerned about this part of the challenge.  I did want to make something I hadn't tried before, though.  I turned to my trusted volume, Baking From My Home to Yours.  I've been wanting to try the Burnt Sugar Ice Cream, and thought this would be a good time.  I followed the recipe pretty closely, but added half a teaspoon of kosher salt along with the milk and cream, since I love the taste of salt with caramel.  I'm amazed how far I've come with things like caramel--I routinely multitask while making it these days, something I never would have done when I first tried it. 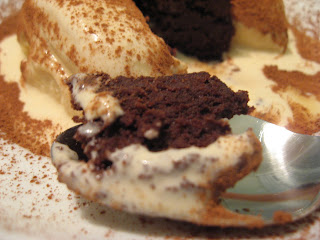 The verdict?  Yummy, both the cake and the ice cream.  Actually, particularly the two together.  The cake by itself is almost too much--it needs something to contrast with the chocolate.  The ice cream was fantastic--a great balance of sweet and salty.  I can definitely see myself making both of them again, though I'd probably save the cake for an occasion when lots of people would be around to help eat it.  Gillian really liked the cake.  Brianna did at first, but then decided she didn't.  I think she was expecting it to be more cake-like, and didn't like the texture.
For the record:  The February 2009 challenge is hosted by Wendy of WMPE's blog and Dharm of Dad ~ Baker & Chef. We have chosen a Chocolate Valentino cake by Chef Wan; a Vanilla Ice Cream recipe from Dharm and a Vanilla Ice Cream recipe from Wendy as the challenge.
The cake recipe can be found here on Dharm's blog or here on Wendy's.  The ice cream recipe can be found in various places online, including over here at Jaime's blog, Good Eats 'n Sweet Treats.  And don't forget to check out the blogroll to see how the hundreds of other Daring Bakers did with this month's challenge. 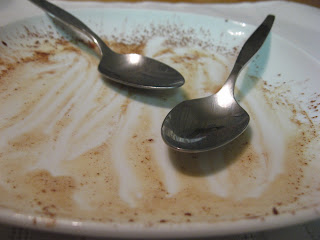