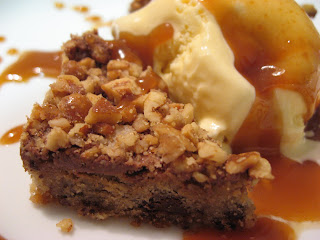 I actually thought I'd get this week's Tuesdays with Dorie recipe done early this week, since I had the weekend off.  But life had other ideas.  My birthday was on Saturday.  We had plans to go out to dinner while some friends watched the girls.  (Yay!)  But then Jamie called me Friday evening while I was still at work to say that he'd had to pick Gillian up early from daycare because she had pink eye.  Ugh.  But he was really awesome and was able to get her in for a quick doctor appointment, so we were able to get the antibiotic drops started right away.  So we were still able to go out, since Gillian's eye was doing much better by Saturday night.  But I didn't accomplish anything but baking some bread on Saturday afternoon, since Gillian was generally cranky and difficult about taking a nap.  (For a change, Brianna gave me no trouble about it.)
We had a nice dinner at one of our favorite Italian restaurants that we seldom get to go to these days.  And then we wandered around Half Price Books for a bit, since we don't have enough books in the house already... =)  When we got back from dinner, we discovered that Brianna wasn't feeling well.  (Should have known the nap was suspicious...)  I'm pretty sure that she has the flu.  (Still sick as of Tuesday morning.)  So Gillian and I went by ourselves to finish the grocery shopping on Sunday (which took forever), and the rest of the day was eaten up with tending Brianna.
I stayed home with Brianna on Monday, so I did finally have a chance to bake Monday afternoon.  (The morning was taken up by cartoons for B and napping for me, since I was up in the middle of the night with her two nights running.)  This week's recipe fortunately wasn't too difficult.  Or at least it wasn't until I decided to make it a bit more complicated. =) 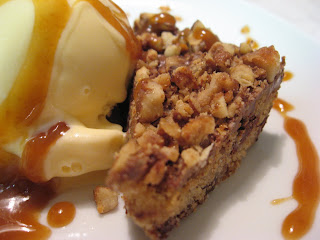 For this week, Whitney of What's Left on the Table? picked the Caramel Crunch Bars.  I made a few changes to the recipe.  Someone mentioned in the P&Q that the bars were quite thin when baked in a 13" x 9" pan, so like a number of other people, I used a 9" square pan instead.  I lined it with non-stick foil so that the bars would come out easily.  The dough for the base was pretty easy to mix up, and I used both the cinnamon and instant espresso powder called for in the recipe.  I wasn't sure if I was in the mood for the toffee to go on top, though.  I did see toffee bits at the grocery store, but they were made with almonds, which are my least favorite nut.  So I decided to make my own topping.
I checked online and found a couple of toffee recipes over at Food Network, but just couldn't get motivated to make either one.  So I went in a slightly different direction.  I had pecans in the freezer, and I thought they would be good on these bars.  I coated them in caramel using the technique used for the peanuts in the Snickery Squares (I used 3 ounces of pecans, but kept the sugar and water the same).  Once the coated pecans had cooled, I stuck them in my food processor and pulsed them until they were in small pieces.  Next I had to decide what chocolate to use.  After tasting the dough for the base, I thought that bittersweet (70%) chocolate was the best match for the espresso.  But the praline bits were almost a bit bitter, and didn't taste as good with the bittersweet chocolate.  So I used milk chocolate for the top, but only three ounces instead of six, since I was dealing with a smaller surface area and I didn't want the bars to end up too sweet.
I baked the base for 25 minutes.  This is one recipe where I really appreciate the description Dorie gives for how to tell when things are done... "until the base is bubbly--so bubbly you can almost hear it percolating--and puckery."  That's exactly what mine was like.   I sprinkled the chopped milk chocolate over the base and popped it back in the oven for a couple minutes.  After spreading the chocolate all over with my offset spatula, I sprinkled the pecan praline on top and pressed it into the chocolate.  I let everything cool pretty much to room temperature and then put the pan in the fridge to make sure the chocolate was firm.  I used my bench scraper to cut the pan into squares. 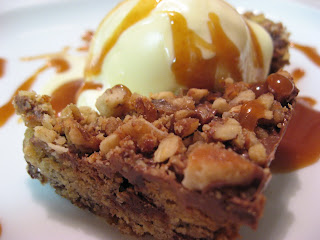 The verdict?  Interesting, in a good way.  The bottom of the bars is quite crunchy, where the sugar and butter caramelized.  I'm not sure I like the cinnamon, but I do like the espresso in the background.  Dorie suggests using these bars to make ice cream sandwiches.  I made mine too thick for that, but I did want to try them with ice cream.  I thought about chocolate, but figured that it wouldn't be very photogenic. =)  I went with vanilla, which paired nicely with the flavors in the bars, as well as a drizzle of salted caramel sauce.  Yum!  Jamie liked it, which isn't surprising since he likes caramel and the mix of salty and sweet.  Not sure if the girls will like the bars.  I think most of them are headed to the daycare teachers so we don't eat them all.
The recipe can be found over at Whitney's blog as well as in Baking From My Home to Yours.  And be sure to check out what all the other TWD bakers did this week! 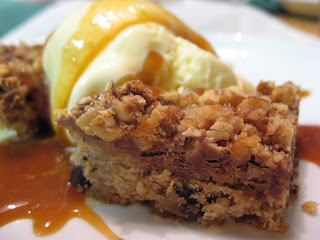