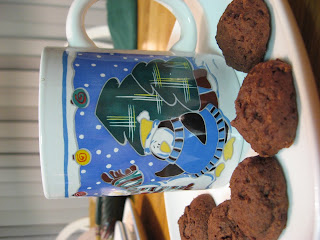 The past couple weeks have been crazy, and I've barely managed to get my TWD posts done on Tuesday.  In fact, I was still baking on Tuesday!  =)  Since I knew that I didn't have the luxury of being off on Tuesday again this week, I figured I'd better get a jump on this week's recipe.  Heather of Randomosity and the Girl selected Buttery Jam Cookies for us to make.  I actually made them at the same time as last week's Sugar Cookies.
The ingredients list for these cookies is pretty straightforward.  Flour, baking powder, salt, butter, sugar, egg, vanilla.  There's a bit of milk, which I predicted would give them a cakey texture.  And for flavor, your favorite jam and some ground ginger.  My favorite jam was easy--I'm still stockpiling Clearbrook Farms Raspberry Butter.  But then I thought I'd try a twist on the recipe.  One of my absolute favorite combinations is raspberry and chocolate.  So I pulled out another favorite, Scharffen Berger cocoa powder, and used half a cup (1.5 ounces) in place of half a cup of the flour.  I left out the ginger, since I wasn't sure how it would be with the chocolate.
Since Dorie said to scoop the dough by rounded teaspoonfuls, I used my #100 disher.  I actually got more cookies than the recipe states--56.  I couldn't really go by color to figure out when they were done, so I just sort of guessed. =)  I baked them on parchment-lined sheets for about 12 minutes.  They didn't really spread much. 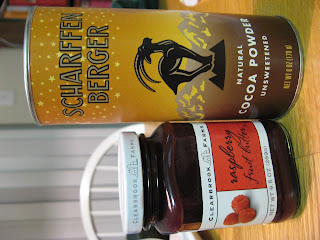 The verdict?  As I expected, the texture was cakey, which is not my favorite.  Dorie says something about them being flaky, which mine certainly weren't.  Right out of the oven, I didn't really taste a lot of the raspberry flavor.  But it was much more noticeable the second day and later.  The chocolate flavor was fantastic. =)  These were a hit with all my taste testers.  I really wanted to make them again to try some changes, but didn't have time.  I'm thinking of reducing or eliminating the milk to change the texture.  And because the chocolate is stronger than the raspberry, I'd probably increase the jam amount by a tablespoon or two.  I'd also like to mix the jam in at the end, for more of a swirl.  When I finally get a chance to play around some more, I'll be sure to post the results.  In the meantime, if you want to see the original recipe, head on over to Heather's blog.  And check out what the other bakers did over at the Tuesdays with Dorie blog roll! 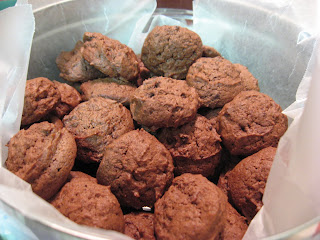