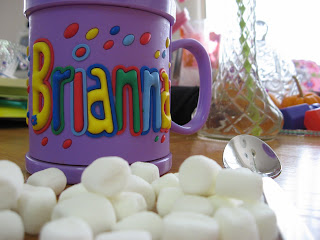 I love weekend breakfasts.  Things are always crazy around here during the week, and no one really gets to eat at home.  Jamie eats oatmeal at work.  Brianna and Gillian get fed at school, though one or both of them may take a granola bar or some dry cereal to munch on during the car ride.  I sometimes get to eat here, but more often it's a muffin or bagel eaten on the run.
Weekends are different.  Even if I work on Saturday, I get at least one day where I can make something for everyone for breakfast.  My girls love pretty much any breakfast food except eggs (they get that from me).  French toast is their favorite, but they also love pancakes, waffles, muffins...  And along with whatever we're eating, Brianna and Gillian often ask if I'll make them hot chocolate. 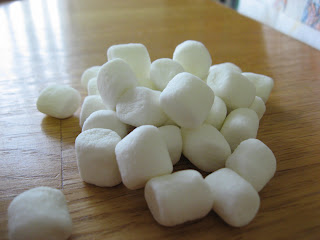 Now I've mentioned before that my girls both love chocolate.  But most of the time, I think the hot chocolate is really just an excuse to eat marshmallows.  Who knew that the mini marshmallow could bring such joy?  =)  Up until yesterday, I've been giving Gillian her hot (well, warm) chocolate in a cup with a lid, so she would just eat all the marshmallows before she even drank anything.  But she's getting better with drinking without spilling, so I gave her a plastic mug and a spoon and let her go crazy.  She had lots of fun putting the marshmallows in her mug and fishing them out again to eat them. =)  Brianna also likes putting some of her marshmallows in her hot chocolate, but first she has to count them.  She's actually getting practice at some simple multiplication and subtraction as she organizes them into groups and then eats them.
As for the actual recipe, sometimes I just wing it, but it finally occurred to me to write down a version that they liked.  You can use whatever dark chocolate you have on hand, adjusting the added sugar to taste.  And while the girls like marshmallows, I actually prefer whipped cream on mine. =) 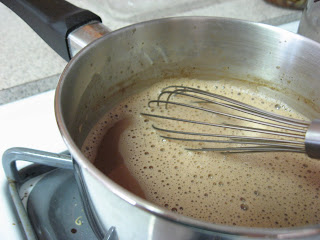 Easy Hot Chocolate
(2 kid-sized servings)
1 cup (8 ounces) milk (we use 1%)
1 ounce bittersweet chocolate, chopped (this time was Ghirardelli 72% pieces)
pinch of salt
1 to 3 teaspoons granulated sugar (to taste, depending on the chocolate you use)
1/4 teaspoon vanilla
mini (or large) marshmallows
Place the milk and chocolate in a small saucepan.  Heat until the chocolate melts, whisking frequently.  Add the sugar and salt and stir to dissolve.  Continue to heat until it just begins to steam, but not simmer.  Remove from heat and stir in the vanilla.  Whisk until frothy.  Pour into mugs and serve with marshmallows on the side. 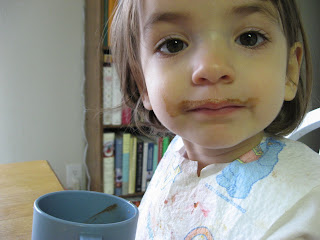