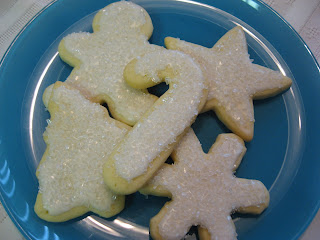 When I was a kid, my mom made a bunch of the ornaments on our tree.  One year she painted a bunch of wooden ones, including some Disney characters.  Another year, she made a bunch of "stained glass" ones, where you had to fill a metal outline with different colored bits and then put them in the oven to melt into the finished ornament.  Again, there were a bunch of Disney ones, as my mom was a big fan of Mickey and Minnie.  For as long as I can remember, she had a Mickey or Minnie Mouse watch. =)
For Brianna's first Christmas season, she was about eleven months old, and was already walking.  So when we thought about putting up the Christmas tree, we were understandably concerned about what ornaments were in her reach.  That year my mom sent me a bunch of the old ornaments that she had made.  They have the handy feature of being non-fragile if they get knocked off. =)  As it turned out, I don't think Brianna really paid that much attention to the ornaments that first year.  But a couple years ago she started wanting to help decorate, and those ornaments were the first ones I let her put on the tree.
Fast forward to this year.  We managed to get the tree put up and put the lights on on Sunday night.  That took longer than expected, so I told Brianna that we'd wait until Monday to put ornaments on so she could help.  So when we got home last evening, I got out the wooden and stained glass ornaments for her.  Of course, Gillian wanted to help, too.  There was quite a bit of debate over who got to put which "Mickey Mouse Clubhouse" ornaments on the tree.  I told them to stick to the bottom part of the tree (which is the only part that Gillian can reach anyway).  I'm sure you can guess what happened... 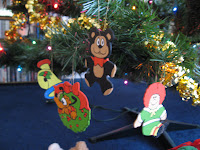 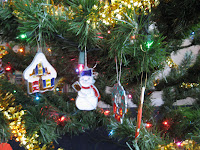 I'm glad that they wanted to help, since it's fun to build holiday memories like this.  But sometimes I wish I had more patience with my children.  Like when it comes to cookie baking and decorating.  They love to do it (well, Brianna does and I'm sure Gillian will, too), but I just get so frustrated with the whole mess sometimes.  I learned something last year, though.  Even though Brianna would really like to help cut out the cookies, it's better if I do that part.  That way I can get it done quickly and get the cookies in the oven.  Then she can have fun with the sprinkles, which is really her favorite part anyway.
This week's Tuesdays with Dorie recipe will be a great one for that.  Ulrike of Küchenlatein chose Grandma's All-Occasion Sugar Cookies for us to bake this week.  I mentioned last week that I'm not a big fan of cut-out cookies.  Mostly that's because I find it hard to concentrate on what I'm doing with the two girls in and out of the kitchen and interrupting me constantly.  I was going to let them help anyway, but I ran out of time (which is why I'm writing this on Tuesday afternoon). 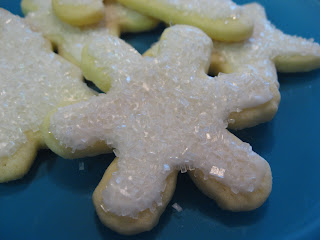 I actually made the dough on Sunday, so it had ample time to chill in the refrigerator.  And I made it by hand rather than with my mixer.  Since this is a softer dough (even chilled), I rolled the dough pretty much right after I took it out of the fridge.  I divided it in half so I could keep some of the dough chilled while I was cutting out the shapes.  I made sure not to roll the dough too thin, as well.  I didn't have any trouble, but I was trying to work as quickly as possible so the dough wouldn't warm up too much.  The scraps from each round of cutting went back into the fridge to get cold again.  They're still there at the moment, and I may just make thumbprints or something out of them.  I ended up baking my cookies for 12 minutes, but that may vary depending on the size of the cookies.
I like icing on my cookies, so I mixed up a simple glaze of powdered sugar (3 ounces or 3/4 cup), milk (a tablespoon) and vanilla (a splash).  I used the back of a spoon to spread the icing on the cooled cookies.  As I iced each one, I sprinkled it with sparkling sugar, gently shaking off the excess.  You can use a variety of colored sugars and sprinkles, but I went with plain white this time.
The verdict?  I sampled one of the cookies plain to see what I thought.  I liked it.  With the baking time I used, the edges were crisp, but the middle was a bit chewy still.  I haven't tried one of the iced ones yet.  And I'll have to come back and give my taste testers' feedback later this evening.  Over all, this is a recipe I'd make again.  And I may be doing it sooner than I think, since I volunteered to make cookies for Brianna's class holiday party next week.  =)
If you want to give these a try, head on over to Ulrike's blog for the recipe.  She is kind enough to post in English as well as German.  And check out the blog roll for more delicious cookies! 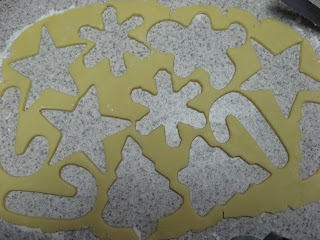