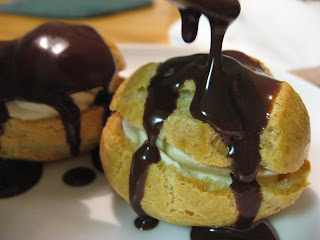 I've never liked eclairs.  The chocolate on top is great, but I really don't care for the filling--I'm not a big fan of custardy things.  But cream puffs?  That's a different story.  I can remember sitting in Gramma Stanley's kitchen as she made chocolate cream puffs.  That is to say, cream puffs filled with chocolate whipped cream.  Yum.  I'm not sure how old I was, but I really only remember the end result, not the process of Gramma making them.
What does stick out in my memory is watching Jacques Pepin on PBS ten or twelve years ago making a Paris-Brest on Cooking with Claudine.  In fact, I pulled out my copy of the companion cookbook to review his recipe before starting on this week's Tuesdays with Dorie selection.  While I don't refer to his cookbooks as often these days (I have 5 or 6 of them), watching Jacques taught me a lot about cooking. 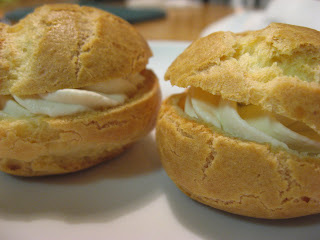 Even though I watched a number of other TV personalities making pâte à choux after I watched Jacques doing it, it was quite some time before I attempted it myself.  The push to give it a try came from Jamie giving me a copy of Sherry Yard's The Secrets of Baking.  I absolutely love that cookbook.  I really appreciate her approach of presenting a master recipe and then showing how it can be modified to create a variety of other things.  One of the first things I tried?  The chocolate cream puffs. =)
I had every intention of getting this week's recipe done early.  I actually started on the filling ingredients on Saturday night.  I wanted to make chocolate whipped cream in addition to the mint cream, but it just didn't cooperate.  I've got to stop trying to make it with 70% chocolate--it always breaks on me.  Either that, or I've got to go back and review Alice Medrich's instructions for whipped ganache using high percentage chocolates.  After several attempts to salvage the chocolate/cream mixture, I finally gave up.  As for the mint cream, the main problem I had was that I couldn't find fresh mint.  So I improvised, and steeped some peppermint tea (the herbal kind that's just dried mint leaves) in the hot cream.  That worked pretty well, until I went to take the teabag out.  I made the mistake of trying to squeeze the excess cream out of the bag, and it popped open, dumping lots of bits of dried mint into the rest of the cream.  After I acquired some cheesecloth (which I'd been meaning to buy anyway), I was able to strain the mint bits out of the cream.  I sweetened it a bit and whipped it, deciding to pass on the sour cream. 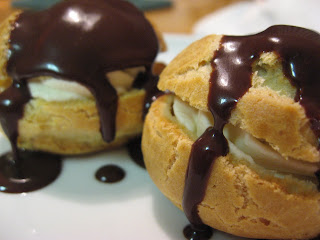 It was Monday night before I finally got around to making the actual pâte à choux.  My original plan had been to make the cream puff ring while Jamie's parents were here, but they left Sunday morning.  I realized that it didn't make sense to make a big dessert for just Jamie and me (since I wasn't sure whether Brianna or Gillian would eat it).  So I cut the recipe in half and made small puffs (I ended up with 15) instead of the ring.  At some point I do want to make it as Dorie intended.
The verdict?  The puffs themselves turned out great.  The chocolate glaze was extremely tasty (though I had to tinker with it, since I was using 70% chocolate again).  I didn't really care for the mint cream.  Next time I'll stick with regular whipped cream or another flavor (raspberry is always good).
Thanks to Caroline of A Consuming Passion for this week's recipe choice. The recipe can, of course, be found in Dorie Greenspan's Baking From My Home to Yours.  You can also find it here, on Epicurious.  Be sure to check out the Tuesdays with Dorie blogroll for many other delicious puffs. 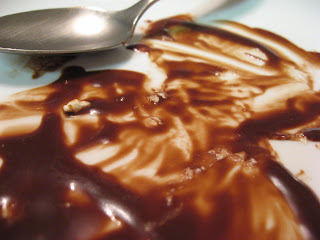