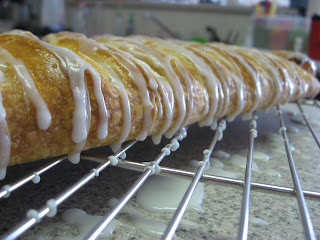 I think this is my favorite Daring Baker challenge so far.  Don't get me wrong, I enjoy things like cake and cheesecake.  But I think bready things are even better!  You might have guessed that based on the past challenges that I've replicated--bagels and cinnamon rolls.

This month's challenge was Danish Braid, chosen by Kelly of Sass & Veracity and Ben of What's Cookin'?  The specific recipe chosen was from Sherry Yard's The Secrets of Baking. (It's handy when the recipe is from a cookbook I own...)  The dough for a danish braid and other danish shapes is laminated (think puff pastry or croissants).  That's the main reason I've avoided making it up until now.  I imagined it would be more difficult that it actually was.  But that's what the Daring Bakers are all about, right?  Being challenged and making new things! 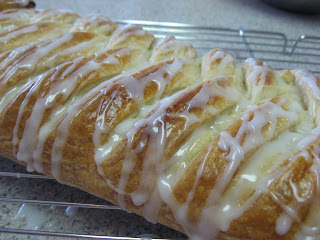 I think one of the things that helped was that I've made brioche dough a couple of times now.  I know how tasty the end result of a buttery dough can be.  =)  I was worried that the process  would be pretty time consuming.  And while it did take a fair bit of time from start to finish, a lot of that was waiting time.  I was able to do a bunch of stuff around the house--wash dishes, do laundry, etc.  (I made the dough on one of the days I was on vacation--kids at daycare, so peace and quiet.)  A number of people had challenges with the butter oozing out of the dough, but I didn't run into any of that.  While we've been having a month-long heat wave here (20+ days of triple-digit temps), my house is nice and air conditioned.  All in all, I found the dough very nice to work with. 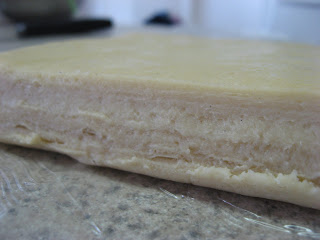 We were allowed to vary the filling and play around a bit with the flavor of the dough.  I had planned to make the dough almost exactly as written, with flavors of cardamom, orange and vanilla (extract only--I couldn't find any affordable vanilla beans locally and kept forgetting to check out online options).  The cardamom I already had on hand, so no problem there.  And I thought I had oranges.  Well, technically, I did have them, but it turned out that they were moldy.  Since I had everything else ready to go when I discovered that, the orange was out.  I substituted some additional milk for the orange juice, which seemed to work fine.

On to the filling... My favorite is cheese danish.  That was pretty easy to do--Sherry Yard has a simple recipe in the section of the book with other danish shapes.  To make things a little more interesting, I paired the cream cheese filling with some of my favorite raspberry fruit butter (I'm sure those who read my blog are so surprised by that!).  For the second braid I added some peach butter, too.  Yum. 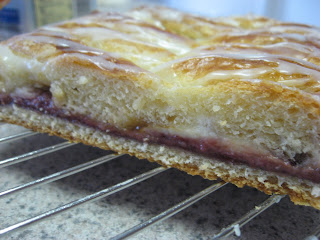 The house smelled amazingly good while the braid was baking.  I could barely wait for it to cool enough (hot cream cheese filling isn't that appealing).  And the taste?  Out of this world good, especially with a little icing drizzled on top.  Plus it looked so cool!  Brianna wasn't so sure she liked my filling choices, but Gillian had no complaints.  And I got lots of compliments when I shared the second braid with some coworkers.

I found one thing kind of interesting...  The first braid was made the day after I made the dough (after it had rested overnight).  I wasn't sure when I would get to the second one, though.  So after the second part of the dough had been in the fridge for about a day, I popped it in the freezer.  The day before I was going to bake the second braid, I put the dough in the fridge to thaw overnight.  While the first braid was very good, the second one was fantastic.  It browned better and the outside was very crisp and flaky.  Other than holding the dough in the fridge and freezer for the week, I only did one thing differently.  The recipe says to apply the egg wash to the braid before it proofs, but I forgot that the first time, so I did it right before I baked it.I did it the way the recipe says for the second one.  That may have had something to do with it.  But then I remembered something that I'd read in a Cook's Illustrated article for Crescent Rolls. The person testing the recipe found that refrigerating that dough for a longer period of time made for a blistered, flaky crust.  I'm thinking that might be what happened with my dough, since I held it for quite a while.  I'll just have to make some more danish to find out for sure! 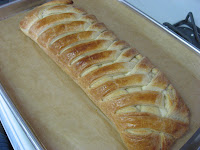 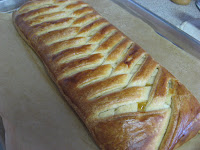 Thanks again to Kelly and Ben for picking a great challenge this month.  I learned a lot, and I'm not afraid of laminated dough anymore.  On to croissants!  =)  Oh, and be sure to head over the the Daring Bakers Blogroll for lots more delicious pastries!

For the dough recipe and instructions, check out Kelly's or Ben's blog.  Here's the filling I used:

(enough for one braid when combined with other filling)

Cream everything together until smooth.  When forming the braid, spread the center section of the dough with jam or other fruit filling.  Dollop the cream cheese filling on top and gently spread on top of the jam.  Proceed with braiding. 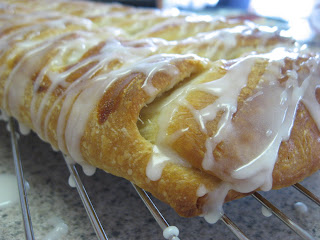