When in doubt, cover it in chocolate 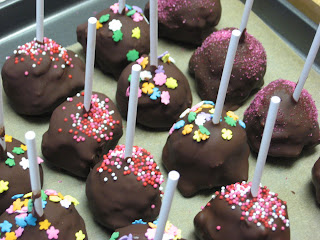 I'm really lucky.  I have a husband who likes to dance.  When we were planning our (rather small) wedding, Jamie mentioned that one of the things he wanted us to include was a "first dance."  My response to that was something along the lines of "that's fine with me, but you need to learn to dance."  I had taken a few ballroom dance lessons in college, but Jamie didn't have any similar experience.  He really enjoys music (both listening and, in the past, performing), so he was open to the idea.  We managed to find a local chapter of what is now USA Dance here in Georgetown that hosts monthly dances with a different lesson (foxtrot, rhumba, waltz, etc) each month.  More than six years later, we're still active in the group, though we don't get as many opportunities to dance or practice these days (two small children will do that to you).
The USA Dance organization is not-for-profit and the local chapters are run by volunteers.  One of the things that people contribute is food for the refreshments table at each dance.  With my love of baking, I almost always bring something.  For one thing, it's a way for me to make a larger batch of something and not have it around the house for too long.  =)  So when I learned that this month's Daring Baker's challenge was Cheesecake Pops, I knew that they would be perfect for this month's dance.  Which happened to be today, the 27th.
The April challenge was selected by by Elle of Feeding My Enthusiasms and Deborah of Taste and Tell.  The cheesecake pops are from Sticky, Chewy, Messy, Gooey by Jill O'Connor.  This recipe was certainly a neat idea.  First you make a New York-style cheesecake.  Then you insert lollipop sticks into small portions of the cheesecake, dip them in chocolate, and decorate them with your choice of toppings.  What's not to love? =)
I've made cheesecake a number of times, but this was rather different from my usual recipe.  I prefer a more creamy cheesecake made with as much sour cream as cream cheese (my favorite is from Rose Levy Beranbaum).  The cheesecake batter was very easy to mix together, especially since I used my stand mixer.  Once the batter was in the pan, it went into a water bath and into the oven.  I read a number of comments from other DBers that they had to bake the cheesecake much longer than the 35-45 minutes indicated in the recipe.  My experience was the same--I finally pulled it out at about 70 minutes, and it was just barely beginning to brown in a spot or two.  I let it cool to room temperature and then put it in the fridge overnight.
Unfortunately, I wonder if I overbaked it, because I had a lot of problems when I went to scoop the cheesecake into balls.  It was very tasty, but the balls kept trying to fall apart.  I finally ended up just dipping my disher in hot water after every scoop and did the best I could. Actually, once I dipped them in the chocolate and decorated them with sprinkles, they looked pretty good, even though they weren't very uniform.  I guess you can't go wrong with covering something in chocolate.  =)  They were quite a hit with the dance crowd this afternoon--I got many very nice compliments.  Now I just have to figure out what to do with the rest of the cheesecake in my fridge--I made about 30 good-sized pops, but I still have almost half the cheesecake left.
Cheesecake Pops
Makes 30 – 40 Pops 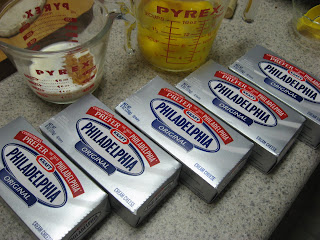 Position oven rack in the middle of the oven and preheat to 325 degrees F. Set some water to boil.

In a large bowl, beat together the cream cheese, sugar, flour, and salt until smooth. If using a mixer, mix on low speed. Add the whole eggs and the egg yolks, one at a time, beating well (but still at low speed) after each addition. Beat in the vanilla and cream.

Grease a 10-inch cake pan (not a springform pan) (I did end up using a springform, since it was the only 10-inch pan I had, so I just wrapped the outside in heavy-duty foil), and pour the batter into the cake pan. Place the pan in a larger roasting pan. Fill the roasting pan with the boiling water until it reaches halfway up the sides of the cake pan. Bake until the cheesecake is firm and slightly golden on top, 35 to 45 minutes. (Mine ended up taking about 70 minutes.  I checked it every 5 minutes after the initial 45 minutes and took it out when it was just barely beginning to brown in a couple spots.)
Remove the cheesecake from the water bath and cool to room temperature. Cover the cheesecake with plastic wrap and refrigerate until very cold, at least 3 hours or up to overnight.

When the cheesecake is cold and very firm, scoop the cheesecake into 2-ounce balls (I used a #40 disher and dipped it in hot water after each scoop) and place on a parchment paper-lined baking sheet. Carefully insert a lollipop stick into each cheesecake ball. Freeze the cheesecake pops, uncovered, until very hard, at least 1 – 2 hours. (I froze mine overnight.) 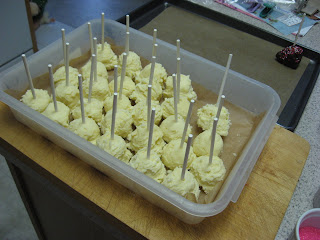 Alternately, you can microwave the same amount of chocolate coating pieces on high at 30 second intervals, stirring until smooth. 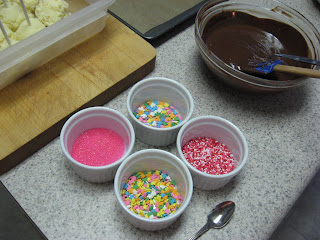 Refrigerate the pops for up to 24 hours, until ready to serve. 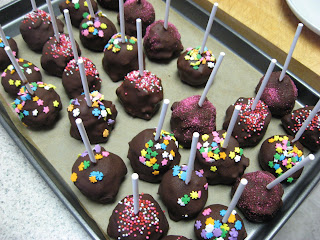