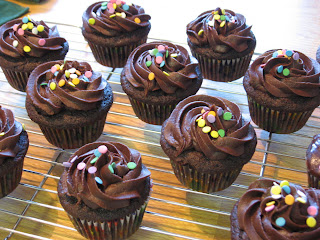 Jamie's birthday was actually Friday, but we always grocery shop on Friday nights, and I didn't have a chance to make anything before then.  It worked out better to wait until today anyway, so Brianna could help.  She wanted to make cake, but it would take us forever to eat, so I convinced her that cupcakes would be better.  And hey, we got to buy new cupcake liners and sprinkles!  There was no question what flavor they would be--"Chocolate with chocolate!"  Fortunately, that's Jamie's favorite as well as Brianna's.  =)  And Gillian didn't complain either.  (My favorite is vanilla cake with chocolate frosting.) 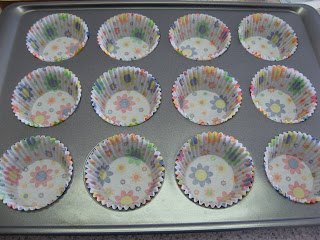 For the cupcake recipe, I turned to my trusty source, Cooks Illustrated.  I made a couple of small modifications to the recipe, and they turned out great, as always.  I had a bit more trouble with the frosting.  I originally wanted to do something light, like a chocolate whipped cream, but my chocolate/cream mixture broke.  So I dumped in some powdered sugar, unsweetened cocoa and a bit more melted chocolate along with a pinch of salt and beat it all together.  I'm not going to give the recipe, since I'm not sure I could duplicate it (or if I should), but it was decent.  Edited:  Okay, so Jamie thought the frosting was great--he really liked the texture.  So I'll have to see if I can get it to come out the same way again.  =) 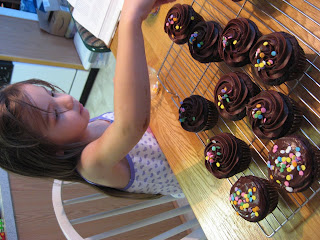 Whisk the flour, baking soda, and baking powder together in a small bowl to combine.

Whisk the eggs in a second medium bowl to combine; add the sugar, vanilla, and salt and whisk until fully incorporated.  Add the cooled chocolate mixture and whisk until combined. Stir in about one-third of the flour mixture until incorporated, then half the sour cream. Alternate stirring in the remaining flour and sour cream, ending with the last third of the flour.

Divide the batter evenly among the muffin pan cups. (I use a #16 disher for this.)  Bake until a toothpick inserted into the center of the cupcakes comes out clean, 18 to 20 minutes. 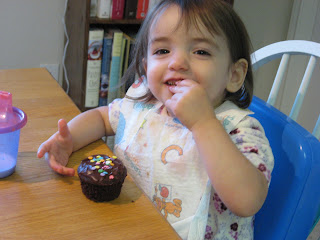