When the moon hits your eye... 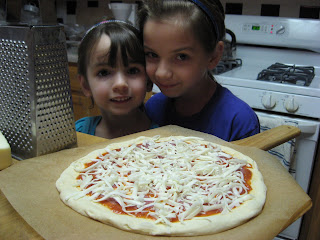 If I had to pick a single favorite food, it would be pizza.  I think I could eat pizza every day and not get tired of it.  But it has to be the right kind of pizza.  It's a good thing that I only lived in Boulder for less than a year, because the people there seem to have a thing for Chicago-style deep dish pizza, based on the restaurants that I went to.  I suppose that's alright if you like that sort of thing, but I grew up eating real pizza, which is to say, thin crust pizza that comes in enormous slices. =)  The sort of pizza we would order by the slice after football games in high school.  (I admit, I was a band geek in high school; a bunch of us would go out after the games and almost always end up at the same place, eating pizza.)  Whenever I go to visit family on the east coast, I try to eat pizza while I'm there.  Fortunately, Austin is home to a lot of people transplanted from the northeast, so we are lucky enough to have some great pizza places.

I know it's not my usual thing to write about savory dishes on this blog, but I'll defend this post by pointing out that it's still baking. =)  I'm actually surprised that I haven't posted about pizza dough more often, since we eat it almost on a weekly basis.  My one previous post was for a Daring Bakers challenge, and featured a recipe from the Bread Baker's Apprentice.  That one was good, but not my favorite--I had some trouble working with the dough.  Since we eat pizza so often, I've tried a number of different recipes over time.  For a while, one from Cook's Illustrated was my standby.  Lately, though, I've tried a couple from my new Peter Reinhart book, Artisan Breads Every Day. 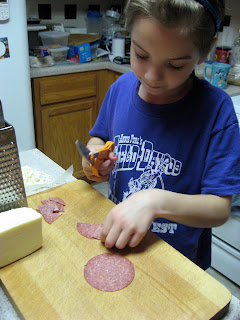 The most recent one that we've been making is the Neo-Neapolitan Pizza Dough.  The original recipe calls for all bread flour, but I like substituting white whole wheat for part of it.  Reinhart mentions several times in the book that it's possible to substitute whole grain flour for part of the white flour in most of the recipes but that addition water will be needed.  He says to add 1/2 tablespoon (1/4 ounce) of water for each 1 ounce of whole grain flour that you substitute.  I made my pizza dough with 4 ounces of white whole wheat flour, so I added 1 ounce of extra water.  (So 20 ounces of bread flour, 4 ounces of white whole wheat flour, and 18 ounces of water.)  The recipe has olive oil and sweetener (sugar, honey or agave syrup) as optional additions.  I used the sweetener once, but found that the crust darkened too quickly (totally burned one pizza) so now I skip it.  I do add the oil.
The recipe says that the dough should be refrigerated overnight before using it.  I've actually been making it in the morning, portioning it into balls for individual pizzas, and putting the dough balls in the fridge to ferment during the day.  It seems to work quite well.  I also like the fact that the dough makes a lot--I make 6 portions of dough at 7 ounces each.  Three of them go into the fridge to be used that evening, and the other three go directly into the freezer to save for the following week.  Jamie and I each make our own pizzas and the girls share one.  The nice thing about individual pizzas is that everyone can have the toppings that they like. =) 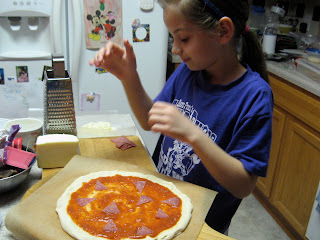 I'm the boring one.  I prefer just sauce and cheese on mine.  We use whole milk mozzarella (the kind you buy in blocks, not fresh mozzarella) because it has a much nicer texture than part-skim.  We just try not to go crazy with it. =)  I also add some freshly grated parmesan on top.  Occasionally I'll also sauté some mushrooms to add to mine.  Jamie is much more adventurous in his toppings.  He usually has pepperoni (we always use turkey pepperoni--Jamie says it tastes just as good but is much less greasy).  He also adds olives (sometimes black, lately green) and mushrooms.  He likes spicy things too, so he often adds some crushed red pepper flakes or adds a bit of hot sauce to his sauce.  And he prefers romano to parmesan.  The girls mostly go with cheese, sometimes adding pepperoni.  When we were making the pizza that I photographed, we were low on pepperoni, so they had salami instead.  I put Brianna to work cutting it into smaller pieces.  Both Brianna and Gillian like helping add stuff to their pizza. =)
With some of the previous recipes I've made, we would pre-bake the crust for a minute or two, then add the toppings and finish baking.  With this dough, though, the bottom was getting too brown when I did that.  But even with cornmeal on the peel, the dough tends to stick to it when we add sauce and toppings to the raw dough.  So I've started doing things another way.  I put a sheet of parchment paper on the peel and put the dough on top of that, then add toppings.  The pizza then goes into the oven, parchment and all.  It's a good idea to pull the parchment out after a minute or two of baking, once the crust has set on the bottom.  Otherwise, it tends to get rather charred around the edges, from baking at 550F for too long. =)  The pizzas bake for 5-7 minutes each, depending on the amount of toppings. 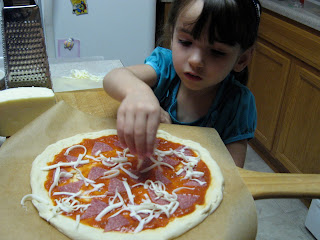 The verdict?  I think I have a new favorite dough!  We've made this one a couple times now, and I really like how it turns out, from both fresh and frozen dough.  The whole wheat adds a nice flavor.  Most of the crust is thin and crisp on the bottom, while the edges are chewier, with some nice bubbles.
If you'd like to try this recipe for yourself, you can find it here.  But I highly recommend getting a copy of Artisan Breads Every Day--there are many other wonderful recipes to try.  And if you're a huge pizza fan, it's worth getting your hands on a copy of Peter Reinhart's pizza book, American Pie.  I was lucky enough to be able to borrow it from my library, and I'll definitely be buying my own copy at some point.
One last thing, this pizza has been submitted to Yeastspotting! 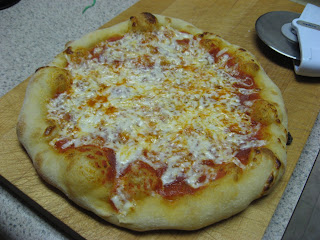