And one to grow on 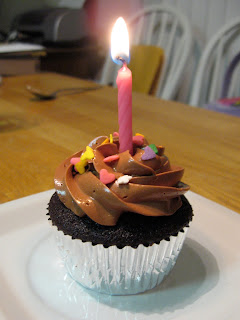 I love birthdays.  It doesn't matter if it's mine or someone else's.  I love presents, and special dinners, and cake, of course.  My birthday and Jamie's are exactly 7 weeks apart (okay, except for leap years, when there's that extra day in there).  I'm the older one.  Most of the time that's no big deal, unless it's a birthday of some significance.  Like next year will be--we turn 40 next year.  And if the last major milestone was any indication, I'd better start looking for obnoxious birthday cards now.  Because the year we turned 30, Jamie got to all the good cards before I did.  Yes, cards.  Like, 3 or 4 of them.  I had to work much, much harder to find something appropriate to respond with. =)  This year, the only real significance that I noticed with the difference in our ages was the census.  As I was filling out the form, it said to put ages as if the form was filled out on April 1st.  That means that for official purposes, I am 39, while Jamie got to be 38.  That hardly seems fair, does it?
But I decided to be nice and make some yummy birthday cupcakes for him anyway.  =P  I can't get away with making cupcakes for Gillian or Brianna most of the time.  They want an actual cake.  (Okay, now that I think about it, I ended up making cake and cupcakes for Brianna, one for home, the other for school.)  But Jamie seems to be okay with cupcakes, or at least he's never told me that he isn't.  As I've mentioned before, everyone in this house likes chocolate cake with chocolate frosting the best, except for me.  So I had at least some idea of what I would be making.  The question was whether I'd be using recipes I'd made before, or something new. 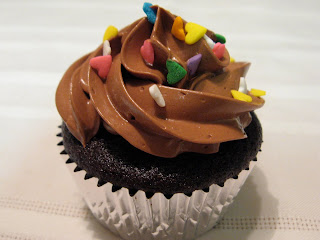 As I was standing in the checkout line at Central Market the Friday night before Jamie's birthday, I looked over the cooking magazines as I usually do.  (They have a really great selection.)  The new Cooks Illustrated caught my eye.  One of the recipes mentioned on the cover was Ultimate Chocolate Cupcakes.  That sounded perfect.  I picked up the magazine and skimmed the article.  Chocolate cupcake, with ganache filling baked in, and chocolate Swiss meringue buttercream on top.  Wow.  More than perfect.  Keeping my fingers crossed, I put the magazine back, and reminded myself to check the mail when we got home.  Sure enough, my copy of the magazine was waiting for me in the mailbox.
There were a few expected things in the recipe, and a few unexpected ones.  As is often the case with chocolate, coffee is added to enhance the flavor.  There actually isn't any dairy in the batter itself.  The butter is replaced with oil (plus there's fat from the chocolate).  Since coffee is the liquid rather than buttermilk, a little vinegar is added to react with the baking soda for leavening.  And the flour used is bread flour, to help strengthen things so you don't end up with crumbs everywhere when eating the cupcakes.  To add more chocolate flavor (in case bittersweet chocolate and cocoa powder aren't enough), ganache is dolloped on top of the batter before baking.  It then sinks, to make a creamy chocolate center for the cupcakes.  Finally, there's the amazing frosting.  I love Swiss meringue buttercream, but have never made a chocolate version. 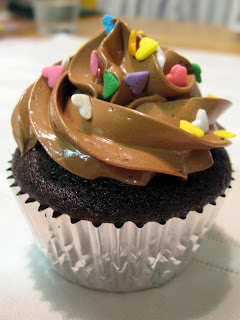 The verdict?  Wow.  These are some wonderful cupcakes.  As promised, the cake is not too crumbly.  And the frosting is amazing.  The only thing that needs some work is the filling.  While it was quite tasty, it sank almost to the bottom of the cupcakes.  I'll have to play around and see if I can do anything about that.  We will definitely be having these again!  The birthday boy enjoyed them a lot, as did the girls.  If you'd like to try them for yourself, I definitely recommend picking up a copy of the magazine.  It's the May/June issue of Cooks Illustrated, which should be available for a while yet.  You can also get access to that recipe and many more by subscribing to their website.  And for some other great recipes from magazines, check out Ivonne's blog for Magazine Mondays. 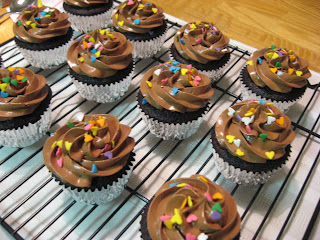