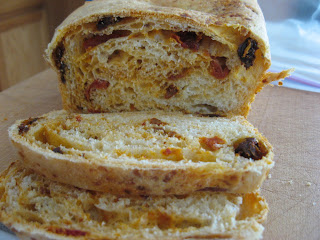 Like most parents of young children, my life is definitely not the same as it used to be. I don't have nearly as much time as I would like to pursue my own interests. Fortunately, one of the things I enjoy doing is cooking and baking. And since we all still need to eat, I get to do a lot of both. That's not to say that we don't get into food ruts, because we definitely do. Especially since Brianna likes to complain about most of what I make (she's at that age...). But I still get to do some of what I love, and the baking has even evolved into this neat hobby of blogging.
I know Jamie doesn't get to do some of the things that he would like to, either. One thing that interests him a lot is genealogy. Back before we were married and had kids, he would often spend part of weekends staring at microfilm, trying to decipher old Italian handwriting. Not to mention the Italian words themselves... That's because his family is Italian. Some northern, some southern. When we first moved to the Austin area, he discovered that there was a local chapter of a national group known as POINT. Basically, it's a bunch of people researching their Italian heritage. They have monthly meetings to share ideas and discuss progress on filling in their family trees. Unfortunately, we don't make it to a lot of the meetings these days, since they're usually during the week. But we do still make it to potlucks periodically. Yes, lucky for me, even though I don't have a drop of Italian blood, they let me hang out and eat their food. =)
I enjoy coming up with things to bring to the potlucks, both sweet and savory dishes. Jamie has even been know to look through Italian cooking magazines and cookbooks to come up with his own contributions. We always bring at least one dish, and often more than one. Which (finally) brings me to the latest recipe that I've made for the BBA Challenge--Casatiello. What a nice Italian name. =) I think I've found my next potluck contribution! 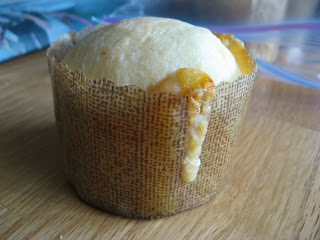 In the book, Peter Reinhart describes this bread as "a rich, dreamy Italian elaboration of brioche." It's a relatively lean version of brioche (six ounces of butter and only two eggs), but with the added bonus of cheese and meat, usually salami. Even better, it's pretty quick to make, for brioche. You make a quick sponge with a hefty tablespoon of instant yeast. The dough itself comes together quickly, and you knead in the salami and cheese. The dough then rises for a few hours, not needing a long refrigerated fermentation. There are various shaping options (panettone molds are commonly used), a bit of baking time, and before you know it you're eating a meal in a piece of bread.
I've made casatiello twice so far, and I definitely see myself making it many times in the future. For the first version, I used buttermilk for the liquid, since I had some that I needed to use up. I used about 4 ounces of salami that I cut into small cubes and sauteed. For the cheese, I chose gouda, cut into small cubes as well (between 1/4" and 1/2"). I found some cute little mini panettone wrappers at Sur la Table, and couldn't resist buying some. On that same trip, I also managed to come home with three adorable little loaf pans. So I ended up making eight 3-ounce mini panettones and three 6-ounce small loaves, baking the rounds for about 20 minutes and the loaves for 5 minutes longer. (I checked doneness by temperature.) 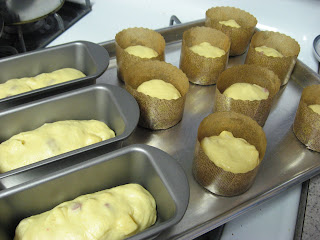 The verdict? Good, but not my favorite. Jamie, the girls and I split one of the loaves. The bread itself was quite tasty, but I didn't like the salami in it. That may well have been because I used a brand of salami that I hadn't tried before. I'd like to try it again with a salami that I know I really like. The cheese was good, though. I took the 3-ounce minis to Gillian's daycare, where they quickly disappeared, and the other two small loaves are still in my freezer. 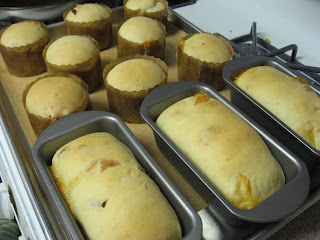 So I mentioned that I've made casatiello twice. I'm friends with one of the teachers at the daycare and often bring her samples of things that I've baked. But she doesn't eat pork, so she didn't sample any of the casatiello when I brought it in. I started trying to come up with a version that she would enjoy. It occurred to me that sun-dried tomatoes might be a really good addition. For the cheese, I decided on a combination of asiago and mozzarella. 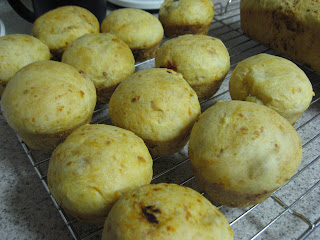 I figured that there was plenty of fat in the dough already, so I bought sun-dried tomatoes that weren't packed in oil. I ended up with a 3.5 ounce package. I cut the tomatoes into small pieces with my kitchen shears. I put the pieces in a bowl and covered them with boiling water to plump them up. I let them sit for about 10 minutes, then drained off the water and patted them dry. I used about 1.5 ounces of asiago that I grated and 4 ounces of whole-milk mozzarella (block, not fresh) cut into small cubes. For this version I also used milk in the sponge (no more buttermilk in the fridge). Things got interesting when I kneaded the sun-dried tomatoes into the dough--it turned a swirly orange color. =) I didn't have a chance to get more panettone wrappers, so I used my muffin tin instead, making twelve 2-ounce rolls. The remaining 18 ounces of dough got turned into a loaf (8.5" x 4.5"). The rolls baked for about 20 minutes and the loaf for about 30 minutes. 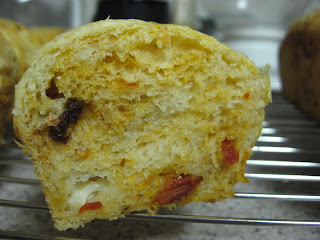 The verdict? Wow. I am definitely making this version again. It was fabulous. I'll probably add a bit more of the asiago next time, to make that flavor stand out more. But everyone who tried it loved it. Brianna said it tasted like pizza bread, which made me think that next time I should add a bit of oregano as well. Amazingly, I still have part of the loaf in my freezer; I want to try it toasted but haven't gotten around to it yet.
Be sure to check out the BBA Challenge blogroll to see what everyone else has done with this recipe. It's definitely a fun one to play around with. Next up, Challah. BTW, I've officially joined the Slow & Steady sub-group of the BBA Challenge. So head over to Nancy's blog later this week for a round-up from some of the bakers who are taking a more leisurely approach to this challenge. Also, I'm submitting my sun-dried tomato version to YeastSpotting, hosted this week by imafoodblog. 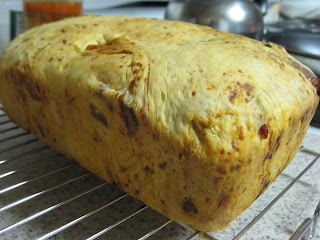 Oh, and if you're looking for my TWD post, it'll be delayed a bit, since I haven't even made my brioche tart yet. Check back later, probably this weekend, for that one.
Posted by Di at 10:15 PM