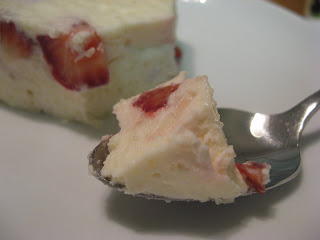 I'm not entirely sure why, but I've been rather apathetic about baking and blogging lately. I still haven't managed to make last week's TWD recipe. And it's not because I didn't want to. I just seem overwhelmed with other stuff right now. And yet I feel like I'm not getting anything done at all. I think the heat isn't helping. It's been miserably hot, with way too many 100+ days so far this year. Yes, we spend a lot of our time in air-conditioned places, including our house, but it's still draining when we are outside. Everyone has been in a bad mood at least some of the time. Case in point--I just had to stop writing to go break up a dispute between Brianna and Gillian over who would get to sit in a particular chair in the living room. Both of them have been getting way too upset over little things, and I'm really not doing any better. *sigh*
So thank goodness this week's Tuesday with Dorie recipe was easy to make. Susan of Sticky, Gooey, Creamy, Chewy picked Raspberry Blanc-Manger for us this week. I've actually heard of Blanc-Manger before, in something or other that I've read, but I had no idea what it was. Turns out that it's a creamy gelatin dessert with fruit in it. We ate jello quite a bit for dessert when I was a kid. It was traditional on Christmas Eve. My mom had a mold that had options for different shapes, and one was a Christmas tree. She would use green or red jello mix and ice cream to make a creamy dessert. But once I left home for college, I seldom ate jello.
When I read the recipe for this week, I wasn't sure if I wanted to make it or not. But I didn't want to miss another week. And I was assured by several people on Twitter that it was an easy recipe. So I decided to make half the recipe. I didn't have raspberries (none looked good at the store), but I did have some strawberries, and I figured that would be a safe substitution. I even remember to buy some new unflavored gelatin. I had some, but had no idea how old it was. I don't know that it really goes bad (hard to tell, since it always smells pretty nasty), but I figured it couldn't hurt to replace it, since I was sure it was more than a few years old. 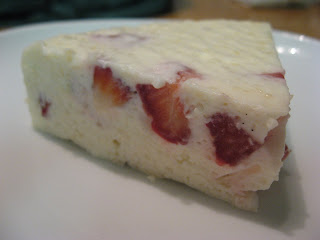 I learned at least one thing this week. It's not necessarily a good idea to try to multitask when making desserts involving gelatin. In the recipe, you're supposed to whip the cream first, then store it in the fridge while working on the gelatin mixture. I didn't have much time, since I was trying to get the blanc manger made before I left for work on Monday morning. I knew that the gelatin mixture would need to cool for a bit, so I figured I could whip the cream while I was waiting. Good idea in theory... Of course, it took longer than I thought it would to whip the cream. And even though I checked on the gelatin a couple times, it still suddenly started to firm up before I was ready. Fortunately, I caught it before it got too set, and I was able to whisk it smooth. I then whisked in about a third of the whipped cream to loosen the mixture a bit. Then I folded in the rest of the whipped cream and the strawberries. I quickly poured it into my 6" pan, covered the pan with plastic wrap, and popped it in the fridge to set while I was at work.
I had no problem unmolding the blanc-manger. I put the bottom of the pan in a bowl of hot water for less than a minute, then flipped it over onto a plate. Perfect. Brianna and Gillian were eagerly waiting to try it, so no garnishing or anything.
The verdict? I was kind of surprised that Brianna and Gillian both liked it a lot. Gillian asked me several times if she could have more "jello." Jamie's comment on it was "weird." I kind of have to agree. I wasn't thrilled with the texture from the almonds. The strawberry and cream combination was quite tasty though. I realized after I tasted mine that I had forgotten to add the vanilla. I used vanilla sugar, though, so there was a little bit of vanilla flavor.
I'd like to give this one another try, but do something about the almonds. Maybe strain them out after steeping them in the milk/sugar mixture. Or try processing them with the sugar beforehand to get a finer texture. I'd also like to try Dorie's suggestion of putting the blanc-manger on a base of cake. All in all, not my favorite, but worth trying again. If nothing else, making this reminded me that that there are lots of things I can do with gelatin that are very different from Jello, since I control what ingredients I use. And Brianna and Gillian were so excited when I told them I had made something like Jello, so I'm going to have to experiment.
Thanks to Susan for a great pick this week. It's definitely something I wouldn't have tried on my own, and it's a great summer recipe. Be sure to head over to her blog for the full recipe. And check out the Tuesdays with Dorie page to see what everyone else did this week. 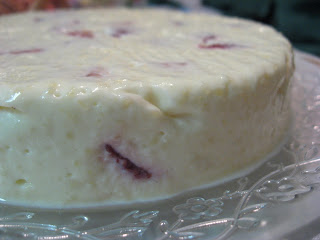