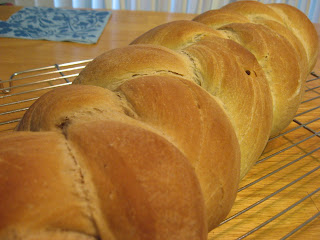 We're only on week two of the BBA Challenge, and I'm already two for two on breads that I probably wouldn't have made any time soon if not for this group.  Last week, we had Anadama Bread.  This week, continuing with A, we have Artos, also know as Greek Celebration Breads.  This was actually a master recipe for a spiced bread with a couple of variations for different holidays (Christmas and Easter).  It's an enriched bread, with some eggs and oil, but not over the top like the brioche we'll be making in a couple weeks.
The recipe gives the option of using an existing starter or making a poolish the day before.  Since I haven't worked up the courage to try making a starter yet, I went with the poolish.  I only needed 7 ounces, so I made a third of the poolish recipe in the book.  I wasn't sure if my girls would eat one of the variations with fruit and nuts, so I went with the basic dough.  In addition to the cinnamon, nutmeg, allspice and cloves, I added 1/4 teaspoon of ground ginger.  It wasn't on purpose--I was on a roll from making the mango bread, and it ended up in the bowl before I realized there wasn't any in the recipe. =)  I used lemon zest, since that's what I had on  hand.  I'm not a big fan of almond, so I reduced the extract to about 1/4 teaspoon.  And I'm still out of honey, so I substituted golden syrup. 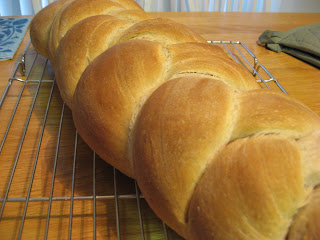 The afternoon I was making this, I knew I wanted time for a nap during while the dough was rising.  So instead of lukewarm milk, I used it cold from the fridge.  One of the things I've learned from all my recent bread baking is that there are lots of ways to make the process fit your schedule.  It used to scare me to deviate at all from a bread recipe, but I've gotten much more bold about making changes. =)  Once the dough was finished with the first rise it was time to shape.
The basic shape in the recipe is a large boule.  But one of the variations was for a braid, and that's what I decided to go with.  I've had lots of practice braiding hair (my own and the girls'), but I need more practice with bread dough.  This one turned out pretty good, though.  I find that for the standard three-strand braid, it's easiest to start in the middle and braid to both ends.  This dough was very nice to work with.  I was a bit surprised at the size of the braid when I was done, though.  I use half-sheet pans for baking (love my restaurant supply store), and this loaf took up the entire diagonal of one.  Wow. 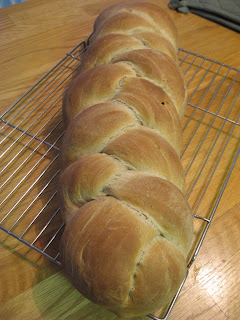 I baked the loaf for 20 minutes (at 350), then rotated the pan and baked it for another 15 minutes.  It smelled wonderful as it neared the end of the baking time.  The recipe includes an optional glaze, but I decided not to use it, since I wasn't sure what I was going to do with all of the bread. 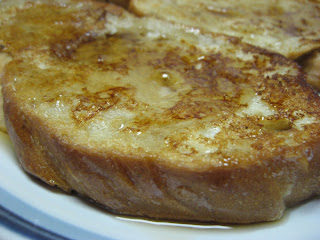 The verdict?  Mmm.  I wasn't quite sure what to expect going in, but I liked this one a lot.  I ate quite a bit of it with butter for breakfast.  It's excellent toasted--and smells fantastic coming out of the toaster.  I also made a few slices into French toast, which also worked very well.  There's still a bit in the freezer.  (along with some Anadama; at this rate I'm going to end up with a freezer full of different partial loaves of bread)  I would really like to try this dough as the base for cinnamon rolls.
To see what the other BBA bakers have done, check out the blogroll, as well as the revised BBA Challenge page with lots of other great info.  Next week, bagels!  I'm also submitting this to Yeastspotting.  Head over there for lots of other wonderful bread creations. 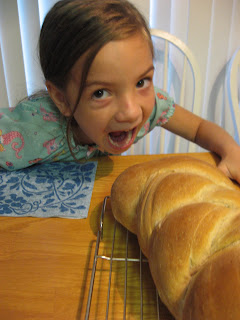