A is for Anadama 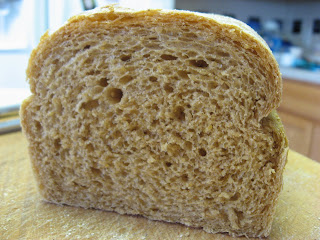 I've gone and done it.  I joined another baking group.  It's all Cathy's fault. =)  A couple weeks ago I saw a post about a group that was planning to bake their way through Peter Reinhart's The Bread Baker's Apprentice.  I have the book, and I've made a few recipes from it, including a couple of Daring Bakers challenges.  But my initial thought was "I have enough to do already, and I don't know if I want to commit to another group."  So I decided not to participate.  Then Cathy sent me a message on Facebook and asked if I was going to join the group.  And Nancy emailed me, as well.  So here I am.  =)  Yes, Mom, if all my friends jump off the bridge, I'll be right behind them... =)
The group was started by Nicole of Pinch My Salt.  You can read the whole story here.  I'm sure I'll write more about the group later, but it's already taken me three days to get this post done, and I'm not sure how much more I can do before the coughing and sneezing do me in... =)  (gotta love 2 1/2 year olds who bring home germs from daycare...) 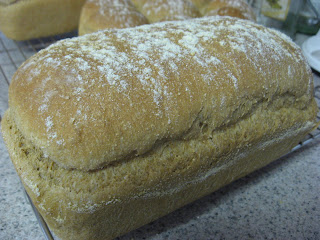 The premise of the group is simple.  Start at the beginning of the book, and bake each recipe in order.  So we start with A, and Anadama Bread.  It's a sandwich loaf sort of bread, made with cornmeal and molasses.  I didn't have coarse grind cornmeal, like polenta, so I just went with the cornmeal I had on hand.  (it's from the bulk bin at Central Market, so not sure what brand)  And I used Brer Rabbit mild flavor molasses.  For the flour I used King Arthur bread flour.
You have to start the day before, but the first day is very quick--mix some cornmeal with water, cover it and leave it overnight.  Mine sat on the counter for almost 24 hours.  For most of the time, it looked like cornmeal sitting in water.  But toward the end of the time, it started to get bubbly.  My best guess is it was from random yeast floating around in my kitchen, since I bake a lot of bread these days.  It smelled okay, so I kept going.
Next you make a sponge by mixing the cornmeal soaker with part of the flour, the yeast and more water.  That sits for an hour or so until it's bubbly.  Then you add the rest of the flour, salt, molasses and a bit of butter.  I used my stand mixer for the mixing and kneading.  I did have to add a bit more flour while it was kneading to get the tacky but not sticky dough called for in the recipe.  When the dough was done kneading, I decided that I wasn't going to manage to finish that night, so I put the dough in one of my rising buckets and tucked it in the fridge to rise overnight. 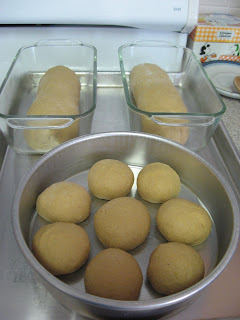 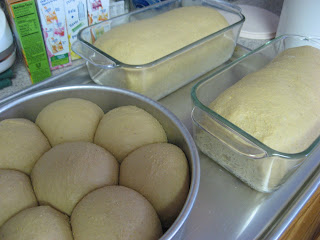 I didn't have any problem with the dough rising.  Once it came up to the tops of the pans, I put everything in the oven for 40 minutes (rotating after 20 minutes), at which point it registered 190 degrees F on my instant read thermometer.  I removed the bread from the pans and let it cool.  (Oh, and I had sprinkled cornmeal on top before baking.) 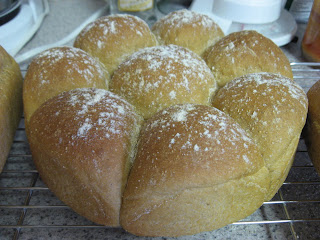 The verdict?  Jamie and I liked this, but Brianna wasn't a fan.  Gillian didn't seem to have a strong opinion either way.  The bread is very good toasted, and made a nice tuna sandwich. =)  I took the rolls to the daycare (easy to portion!) along with some flavored butter (it would have been honey butter, but I was out of honey, so I used golden syrup).  I figured they'd appreciate me bringing something that wasn't loaded with sugar and fat for a change... =)
Next up is Artos - Greek Celebration Bread.  And to see how others fared with the Anadama Bread, check out Nicole's post, here. 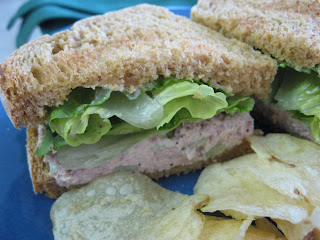