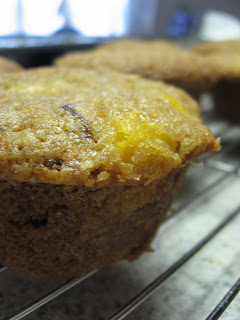 Sometimes I really hate getting older.  For instance, it's very frustrating when I get sick.  The same cold that barely slows my kiddos down knocks me on my butt.  Ugh.  I really didn't mean to take this long to post my Tuesdays with Dorie recipe this week.  I actually made the recipe on Sunday.  But my in-laws were here until Tuesday morning, so I didn't get a chance to write up the post.  And then Gillian was kind enough to share her cold with me, so by Tuesday evening I didn't want to do anything but go to bed.  Fortunately, I had the day off today (Wednesday), so I figured that even if I didn't feel that great, I'd at least have plenty of time to get some writing done (and maybe even clear out some of my Google Reader!).
I figured I'd better finish my Anadama Bread post first, since I already had that started.  And I thought I'd check my email and read some stuff on Facebook while I was waiting for my brain to wake up all the way (stupid cold).  When I was reading stuff last night, I discovered that Pamela had signed up for Twitter.  Now I've been thinking about it for a while, since a bunch of the other TWD/BBA folks are on there.  Like the BBA Challenge, I figured it was another activity that I didn't need.  But for some reason, Pamela joining was the push I needed. =)  So it's her fault that I'm just writing this now.  Because I spent the morning sitting around in my pajamas, drinking tea (and coughing and sneezing), trying to figure out Twitter.  =) 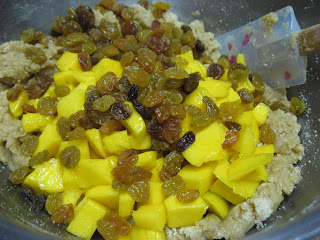 But now to get to the Mango Bread.  (not yeasted bread; think banana or zucchini bread)  This week's recipe was chosen by Kelly of Baking with the Boys.  I don't read Kelly's blog as often as I should--when I do, it's quite entertaining.  And thanks to Kelly, I did something new--bought a fresh mango.  I've bought frozen mango chunks before (mango peach daquiri...mmm...), but for some reason, I don't think I've ever bought a whole one.  (Jamie just said he thinks we've bought one before, I but don't remember it.)  Fortunately, I've watched enough cooking shows that it didn't give me too much trouble.  Actually, I bought two, since a lot of people reported needing more than one to get two cups of diced mango.
I pretty much followed the recipe on this one.  I did have to use lemon zest instead of lime.  I could have sworn I had another lime in the fridge, but no such luck.  I used golden raisins since I had them on hand and because some little bitty ants had managed to get into the regular raisins.  (argh)  And rather than use a loaf pan, I made muffins, mostly because they wouldn't take as long to bake.  As usual, I managed to overfill the cups, but it didn't make too big a mess.  I did realize that I had too much batter, and put the last of it in a ramekin to bake.  The muffins took about 30 minutes to bake. 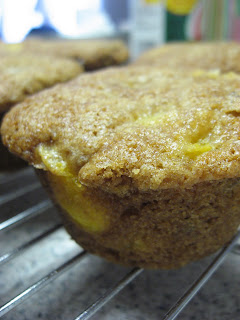 The verdict?  Mmm.  This one's a keeper.  Very moist, since the recipe uses oil rather than butter.  A bunch of people commented on the P&Q that these were better the second day, and I agree.  As usual, Brianna ate one and claimed to like it, but then changed her mind.  Gillian really liked them.  And our house guests seemed to like them too.
For the recipe, head over to Kelly's blog.  And now that I've managed to get this done, maybe I really will catch up on my Google Reader and comment on some of the other mango breads out there.  But first I'm going to see if more tea will help my stuffy head feel better. *sigh* 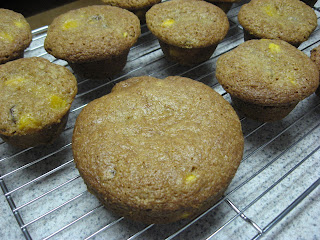