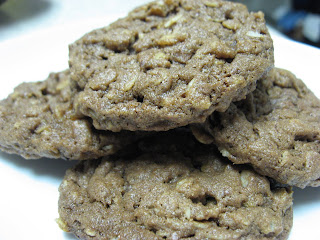 I actually had to put peanut butter on my shopping list for next week.  I'm not really sure how long I've had the jar in my pantry.  I know I used some of it for the Peanut Butter Torte back in May, but the jar was open before that.  The only other things I know I use it for are chocolate-peanut butter no-bake cookies, and peanut butter swirl brownies.  I can't remember the last time I made either of those.  It's not that I really have anything against peanut butter, it's just not the first flavor I go for.  And when I do go for it, it's pretty much always in combination with chocolate.  Despite my love of all things dark chocolate, though, I prefer milk chocolate with my peanut butter.  Think Reese's--the cups, of course, but my favorite is actually the eggs they make at Easter time.  To my taste, they have the best ratio of filling to chocolate.
This week's Tuesdays with Dorie recipe is Chunky Peanut Butter and Oatmeal Chocolate Chipsters (does that win for longest recipe title yet?), chosen by Stefany of Proceed with Caution.  I actually made these twice (a half-batch each time), with some variations.  For one, the only peanut butter I have is smooth, not crunchy, because I don't like crunchy.  In both batches I omitted the cinnamon, although I kept the nutmeg.  And I chopped up some milk chocolate (El Rey Caoba 41%, for the most part) for the chips. 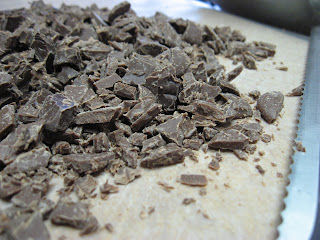 Other than those changes, the first batch was made according to the recipe.  I mixed these up last weekend as something to take to our monthly dance.  Cookies always make good finger food.  =)  I didn't have a lot of time, so they didn't really get to chill in the fridge.  I scooped the dough out onto baking sheets, flattened the dough balls just slightly, and popped them in the oven.  The cookies came out very flat.  I underbaked them a bit, since I wanted them to stay a little chewy.  I had to let them cool on the baking sheet for a while before I could transfer them to a rack. 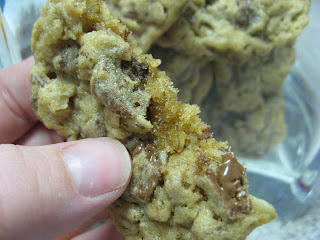 The verdict?  Wow, were they a hit!  I liked them quite a bit myself, but I was still surprised to see how quickly they disappeared.  One person asked if I would email her the recipe as soon as I got home (which I did, or I probably would have forgotten, the way last week went).  Usually when I take something to a dance, there's at least a little left over for us.  Not this time!
So for the past week, I've been thinking about making more.  I finally had a good reason on Labor Day, since we were invited over for dinner with some friends (sort of surrogate grandparents to Brianna and Gillian).  One thing that stuck with me from the first batch was that the taste and texture reminded me of the no-bake cookies I mentioned above.  So for my second batch, I added in 1/4 cup cocoa powder (Scharffen Berger) with the flour.  I also had time to chill the dough for a few hours while I attempted to take a nap (not easy with children conspiring against me). 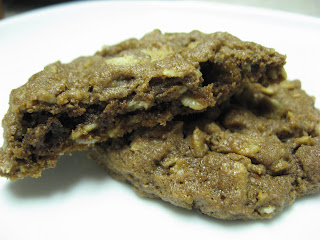 Verdict #2?  I like these even better, and they were very popular with everyone after dinner.  I left some with our friends, but still have quite a few for us.  Brianna already asked if she can have one in her lunch tomorrow.  =)  These cookies weren't quite so flat, I think because the dough was chilled.  I can definitely see myself buying more peanut butter just to make more of these.
Want to try them for yourself?  You can find them in Dorie's book, of course, or head on over to Stefany's blog for the recipe. 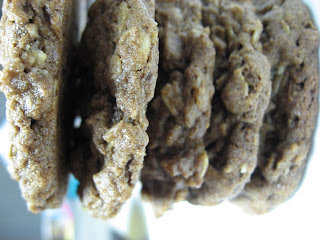