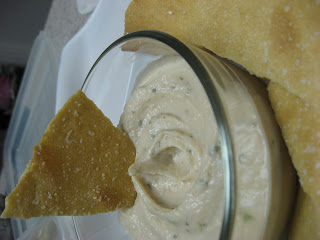 This month's Daring Bakers challenge comes to us from Natalie of Gluten a Go Go and Shel of Musings from the Fishbowl.  They chose Lavash Crackers, from Peter Reinhart's The Bread Baker's Apprentice.  (Yay, a cookbook I own!)  Now I've made crackers before, but this challenge had a twist--we had to make it either vegan or gluten-free (or both).  And Natalie and Shel requested that we come up with a dip to serve with our lavash that was both vegan and gluten-free.  So there was lots of opportunity for creativity with this one!
I decided to go with the vegan option, since I wasn't sure how much time I'd have to play around this month, and the recipe was already pretty much vegan.  There was a tablespoon of honey in the original recipe; I substituted Lyle's Golden Syrup for that.  I've had a jar of it in my pantry for a while but I didn't open it until this challenge.  Boy, is that stuff tasty!  The texture is similar to honey, so I thought it would be a good alternative, and I double-checked their website to make sure it was vegan.  Other than that, the dough is just made of flour, salt, yeast, oil and water. 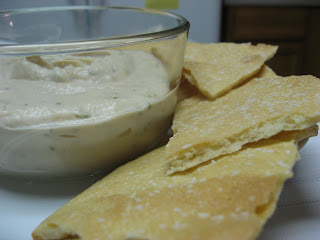 The dough was very nice to work with.  I kneaded it by hand, something I don't do all that often.  (It made sense, due to the texture and small quantity of the dough.)  After rising, the dough was quite easy to roll out.  Unfortunately, I didn't get it as thin as I would have liked.  Next time I'll divide the dough in half to make it easier to roll out very thin.  Or try running it through my pasta machine, a suggestion from some of the other Daring Bakers.  I topped part of my dough with sesame seeds and another part with kosher salt.  The sesame seeds didn't really want to stick, though, even though I went over them with the rolling pin to work them into the dough.  The salt worked great, though.  I did one large sheet, and broke it into individual crackers after baking.  I had to bake my dough longer than the listed time because it was a little thick, but the crackers finally turned out pretty crispy.
For my dip, I went with a variation of a dip I've made before.  It's mainly white beans with some roasted garlic and rosemary.  I usually use some chicken broth in it, but I just thinned it with water to keep it vegan.  I also discovered at the last minute that I didn't have any lemons in my fridge, so I used lime juice instead.  I tried to list quantities for the recipe listed below, but to be honest, I just kind of wing it.  =)
The verdict?  Everyone here really liked the crackers with salt.  I do want to try again to make them thinner.  The dip ended up quite tasty with the changes I made.  Want to give these crackers a try yourself?  You can find the recipe here or here, or check out Peter Reinhart's book for yourself.  And my dip recipe can be found below. 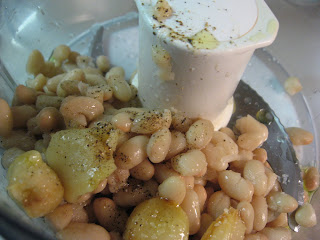 Garlic & Rosemary White Bean Dip
1 15-ounce can white beans, drained and rinsed (I used Great Northern beans)
4 large cloves roasted garlic
2-3 teaspoons olive oil
1/2 teaspoon kosher salt
1/4 teaspoon freshly ground black pepper
1 teaspoon minced fresh rosemary
one lime, cut into quarters
2-3 teaspoons water
Place the beans and garlic in the bowl of your food processor.  Drizzle them with the olive oil.  Add the salt, pepper, rosemary and the juice from a couple of the lime quarters.  Pulse the mixture until it's smooth.  Add some water to thin the dip if it seems too thick.  Add additional salt, pepper and lime juice to taste. 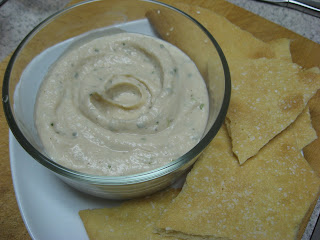