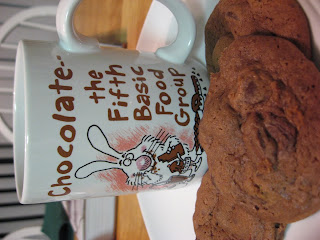 This will have to be a quick post.  I'm in the middle of making cupcakes for my boss's birthday tomorrow (I'm writing this Monday night), and I have way too much other stuff I still need to get done before we leave for our trip on Thursday morning.  (My youngest sister is getting married on Saturday!)
This week's TWD recipe is Chocolate Malted Whopper Drops, chosen by Rachel of Confessions of a Tangerine Tart.  I admit, I wasn't too sure about this one.  I love chocolate, but I'm not a big fan of malt.  And this recipe has both malted milk powder in the cookie dough and chopped up Whoppers thrown in.  But I knew that Jamie would really enjoy them, and odds were good the girls would eat them too.  Plus, Brianna has been asking me if I could make some cookies for her to take to her teacher.  With that in mind, I decided to make the whole batch. 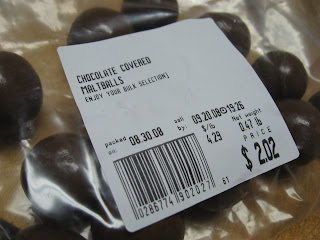 The ingredients...  Jamie found the Carnation malted milk powder for me.  I pulled out the Scharffen Berger cocoa that I've been using quite a bit lately.  I didn't use actual Whoppers; I found chocolate covered malt balls in the bulk section at Central Market.  They were huge--lots of chocolate coating.  And for the chips I used some Ghirardelli 60% bittersweet chips.
The cookie dough came together quickly.  It was softer than I expected.  I used my trusty #40 disher and ended up with a total of 38 cookies.  I baked them for 11 minutes.  The finished cookies were also rather soft--I had to let them cool on the baking sheets for a bit before I could transfer them to a rack. 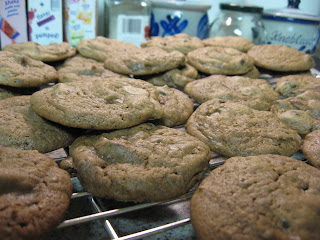 The verdict?  Jamie liked them a lot.  I thought they were okay.  The malt flavor didn't seem as pronounced in the finished cookies, except for the whopper bits.  I sent half a dozen to school for Brianna's teacher, half a dozen for the after-school program teachers, and took a dozen to the daycare.  And of course, put one in Brianna's lunch.  The rest went into a tin on the kitchen counter.  When I tried to take some out for some more pictures, I found that they were rather stuck together, which was kind of annoying.  I'm not sure if I'll make these again, since there are lots of other cookies I like better.  But I'm glad I gave them a try.  If you'd like to try them for yourself, check out the recipe over at Rachel's blog. 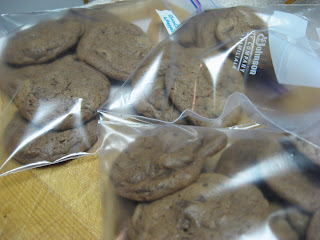