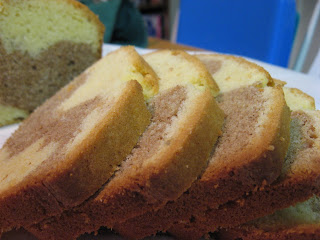 This week's Tuesdays with Dorie recipe is Crème Brulée, selected by Mari of Mevrouw Cupcake. Mari's blog is one of my favorites, so I'm particularly sad that I didn't get to make what she chose. But I don't have a torch, and I wasn't up to dealing with the broiler. Fortunately, our gracious leader Laurie gave us the option to make a past recipe that we missed. I joined with the Brown Sugar-Apple Cheesecake, so I only missed half a dozen recipes.
My first plan was to make the Hidden Berry Cream Cheese Torte from week three. I even bought the cream cheese and cottage cheese for it (so stay tuned, it may be coming soon). But I worked all day Saturday and my children were not cooperating at all on Sunday, so it just didn't happen. While I was at work on Monday, I started thinking about which of the other options I might be able to pull off Monday evening. I ultimately settled on the Perfection Poundcake from week 4, which was chosen by Laurie.
I've been in the mood for fall, and the weather here is finally cooling off some. Which means that it's only getting up to about 90 during the day. =) But hey, it got down into the 50s this morning, so we're making progress. Much of what I associate with fall is the spices--cinnamon, ginger, cloves, nutmeg... And that's what I used to modify the poundcake. I thought about just mixing them into the batter, but then thought that making a marbled cake would be more fun, not to mention more photogenic. =)
Making the cake was pretty straightforward. A stand mixer is helpful, since creaming the butter and sugar and beating in the eggs takes a while. To make the marble, I took half of the batter and mixed in my spices. Then I alternated the two batters in the pan and swirled the top a bit. Plan ahead, since the baking time is pretty long--up to 90 minutes for a smaller loaf pan.
The verdict? The flavor is really good. The spice part is a nice complement to the plain vanilla part. But my cake came out a little dry. I baked it for 80 minutes, but maybe I should have taken it out a bit sooner. Also, I used a Pyrex pan. I don't usually bother to lower the baking temperature, but maybe for this recipe I should have. Another option would be to brush the cake with some sort of simple syrup when it comes out of the oven. In the meantime, I'll just enjoy mine with some tea.
Be sure to check out all the other wonderful bakers on the Tuesdays with Dorie blogroll. There's sure to be a lot of great crème brulée posts as well as other rewinds. 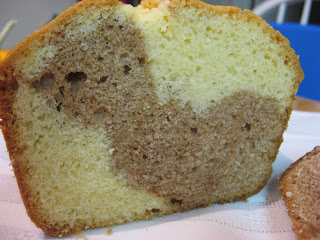 Center a rack in the oven and preheat the oven to 325 degrees F. Butter a 9x5-inch loaf pan or an 8-1/2 x 4-1/2-inch loaf pan (I used Pam for Baking). Put the pan on an insulated baking sheet or on two regular baking sheets stacked one on top of the other. (I did put mine on a baking sheet, but just a regular one.)

Whisk together the flour, baking powder, and salt.

Working with a stand mixer, preferably fitted with a paddle attachment, or with a hand mixer in a large bowl, beat the butter and sugar on high speed until pale and fluffy, a full 5 minutes. Scrape down the bowl and beater and reduce the mixer speed to medium. Add the eggs one at a time, beating for 1 to 2 minutes after each egg goes in. As you're working, scrape down the bowl and beater often. Mix in the vanilla extract. Reduce the mixer speed to low and add the flour, mixing only until it is incorporated - don't overmix. In fact, you might want to fold in the last of the flour, or even all of it, by hand with a rubber spatula. After the batter is fully mixed, transfer half of it to another bowl and gently blend in the spices. Alternate large spoonfuls of the light and dark batters in the pan, then run a kitchen knife in a zigzag pattern through the batters to marble them.

Put the cake into the oven to bake, and check on it after about 45 minutes. If it's browning too quickly, cover it loosely with a foil tent. If you're using a 9x5 pan, you'll need to bake the cake for 70 to 75 minutes; the smaller pan needs about 90 minutes (I baked mine for 80 minutes). The cake is properly baked when a thin knife inserted deep into the center comes out clean.

Remove the cake from the oven, transfer the pan to a rack and let rest for 30 minutes.

Run a blunt knife between the cake and the sides of the pan and turn the cake out, then turn it right side up on the rack and cool to room temperature. 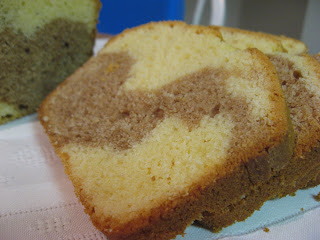