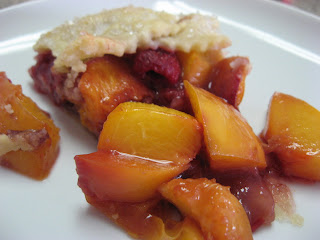 This week's Tuesdays with Dorie recipe, Summer Fruit Galette, was chosen by Michelle of Michelle in Colorado Springs.  There are several things I like about this one.  For one thing, it's versatile--you can go with whatever fruit is available and looks good.  Also, it gives me a chance to try out Dorie's "good for almost everything" pie crust, which I missed out on by skipping the blueberry pie a couple weeks ago.  And hey, it's like pie!  I love pie!
I was a bit disappointed that I couldn't find any local Texas peaches at my grocery store this week.  I ended up with some nice ones from Georgia, though.  They turned out to be freestone peaches, as well, which made my life easier.  I couldn't resist the chance to pair them with some raspberries--have you picked up yet on the fact that I like raspberries? =).  I had graham crackers, which I pounded into crumbs (fun with the rolling pin!), and some of my favorite raspberry butter to go underneath everything.  And I had some pretty sparkling sugar for the crust. 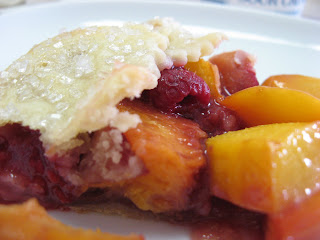 The only thing I didn't have much of was time.  I worked a really long day on Friday and then Saturday as well.  I intended to get an earlier start on Sunday than I did, and had other things that needed my attention (two of them are named Brianna and Gillian).  I did get as far as making the dough for the crust, though.  My favorite crust is all butter, but I was more than willing to give this one a try.  It seemed like the shortening made the dough softer.  So off to the fridge it went to chill.  I checked it later in the evening, but it still seemed too soft, so I ended up leaving it overnight.
I got up just a little bit earlier so I could make the galette Monday morning.  That seemed preferable to trying to bake it and blog about it Monday night, plus I figured I'd get better pictures earlier in the day.  =)  The dough was pretty easy to roll out, but seemed a little on the fragile side.  I transferred it to a piece of parchment on my baking pan and added the jam, crumbs and fruit.  Since I knew I wasn't going to manage to eat all of the galette in one day, I decided to omit the custard, since I wasn't sure how well it would keep.  I'll have to give it a try another time.  I did add a little sugar to my fruit, since it wasn't going to be topped with the sweet custard mixture.  Into the oven everything went while I finished helping Jamie get the girls out the door and finished getting myself ready for work.  Boy, did my house smell good!
The verdict?  The peaches and raspberries made for a more tart combination than I was expecting.  I suspect the custard would have helped with that.  Fortunately, I like tart things.  The galette was also a bit on the soggy side.  If I'd had time to preheat my oven and baking stone longer, I would have put the baking pan directly on the stone, which might have made for a crisper crust.  Maybe next time.  The crust was flaky, but I think it would have been better if it was a little sturdier.  Definitely worth trying, though.
For the recipe, head on over to Melissa's blog.  And don't forget to check out all the other wonderful creations from the Tuesdays with Dorie crew! 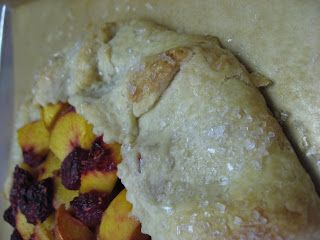